American warplanes had hardly left the skies over Libya when the remonstrations began. "NATO has let us down," said rebel military chief Abdul Fattah Younis. As the rebels retreated in the town of Brega in the face of a heavy onslaught by Gadhafi's troops, there were no NATO planes in sight.

The withdrawal of the American planes, which flew more than half of the sorties in the first two weeks of the air strikes, has weakened NATO's potential force. With the organization having taken control of the operation, American planes are now only in standby mode, leaving the much smaller air forces of France and the United Kingdom to take on most of the workload. Appeals from the NATO leadership to member countries to send more aircraft have so far been met with little success. Only the British have beefed up their presence, increasing the number of its Tornado contingent from eight to 12. The French, meanwhile, are having to split their military resouces between two fronts now, with the opening of the conflict in the Ivory Coast.

But the Libyan rebels are not alone in their complaints: Within NATO, there is also increasing frustration at the slow progress on the ground. The seemingly rudderless attacking and fleeing of the untrained fighters in the face of government soldiers is causing the Western allies to despair, albeit not in public, because it looks more and more likely that the undeclared aim of the international intervention -- the removal of dictator Moammar Gadhafi -- will probably never be achieved.

And this mutual disillusionment suggests that the second phase of the civil war is now beginning. The situation which critics had feared from the start has now seemingly occurred: a stalemate. The rebels are strong enough, with the support of NATO, to maintain their control of Benghazi, but are too weak to drive on in the direction of Tripoli. The front is moving a few miles back and forth, but the split between the Gadhafi-controlled west of the country and the rebel zone in the east seems to be solidifying.

"Sliding into a Prolonged Conflict"

"Libya appears to be sliding into a prolonged conflict with no light at the end of the tunnel," Fawaz Gerges, a Middle East expert at the London School of Economics (LSE), wrote in a commentary posted on CNN's website. The tenacious resistance of the Gadhafi regime is not surprising, he added, "given the tribal structure of Libyan society and Gadhafi's manipulation and co-opting of tribal divisions and allies."

NATO can always point to the fact that it is simply implementing the aims agreed upon by the United Nations -- a no-fly zone and the protection of civilians. But in reality, it is hardly a secret that the true goals of the operation are more than that. Every day that Gadhafi remains in power, pressure is growing on Western politicians and military leaders. The question of how long the intervention will last is increasingly being asked out loud. The British Royal Air Force chief estimated this week that it would take six months. Politicians, on the other hand, have had the foresight not to mention any deadlines.

The discussion in the West has been running in circles for quite some time now, although the question of whether to arm the rebels has been answered: The first deliveries of light weapons from abroad have arrived, rebel leader Younis said. The British government has also sent communications equipment to enable rebel leaders to better command their fighters. The international community appears to have agreed, however, that heavy artillery and complex high-tech weapons should not be given to Gadhafi's opponents.

As for the government, Gadhafi and his followers are being tackled with a further mixture of threats and promises. The dictator has been given the message that he would not be prevented from going into exile. At the same time, those around him are being encouraged to defect. And there does seem to be some movement: The flight of Foreign Minister Moussa Koussa last week was hailed as a breakthrough, while rumors that two of Gadhafi's sons, Saif al-Islam and Al-Saadi, are planning a future without their father can be interpreted as a sign of nervousness.

On Wednesday evening it was revealed that Gadhafi had written a letter to US President Barack Obama asking him to end the air strikes. It met with little success: Hilary Clinton immediately rejected the appeal out of hand and countered by demanding that the dictator go into exile.

But what will happen if all this fails to change the status quo? How long can the no-fly zone be maintained? Could the West come to terms with a divided country? How serious is the West about its repeated assertion that a future for Libya which involves Gadhafi and his sons is unthinkable? A divided country is regarded as unacceptable in the long run, but a ground invasion involving Western troops to resolve this split has been ruled out by all sides. An occupation of Libya was explicitly prohibited by UN Security Council Resolution 1973, and no Western or Arabic government wants to be drawn so far into the war. Nor would it be advisable, LSE Professor Gerges wrote. A military escalation could only be a backwards step -- one that would weaken the democratic movement in Libya.

No one has so far come up with an effective formula for ending the Libyan stalemate. The Western-Arab alliance is hoping steadfastedly for one of two outcomes: Either the rebels win the military conflict against all escalations, or Gadhafi voluntarily steps down. Either event would come as a surprise.

In the US, where skeptics have dominated the discussion from the start, there have already been demands for the operation, which seems to lack any strategy, to be ended immediately.

"Hoping to get lucky is no basis for US foreign policy," Doug Bandow of the libertarian Cato Institute wrote on the Huffington Post website. "The administration should begin a speedy exit from Libya. Washington doesn't need another disaster in the Middle East."

That would mean a loss of face, which no Western government wants. The crucial question is: Who has more patience, NATO or Gadhafi? 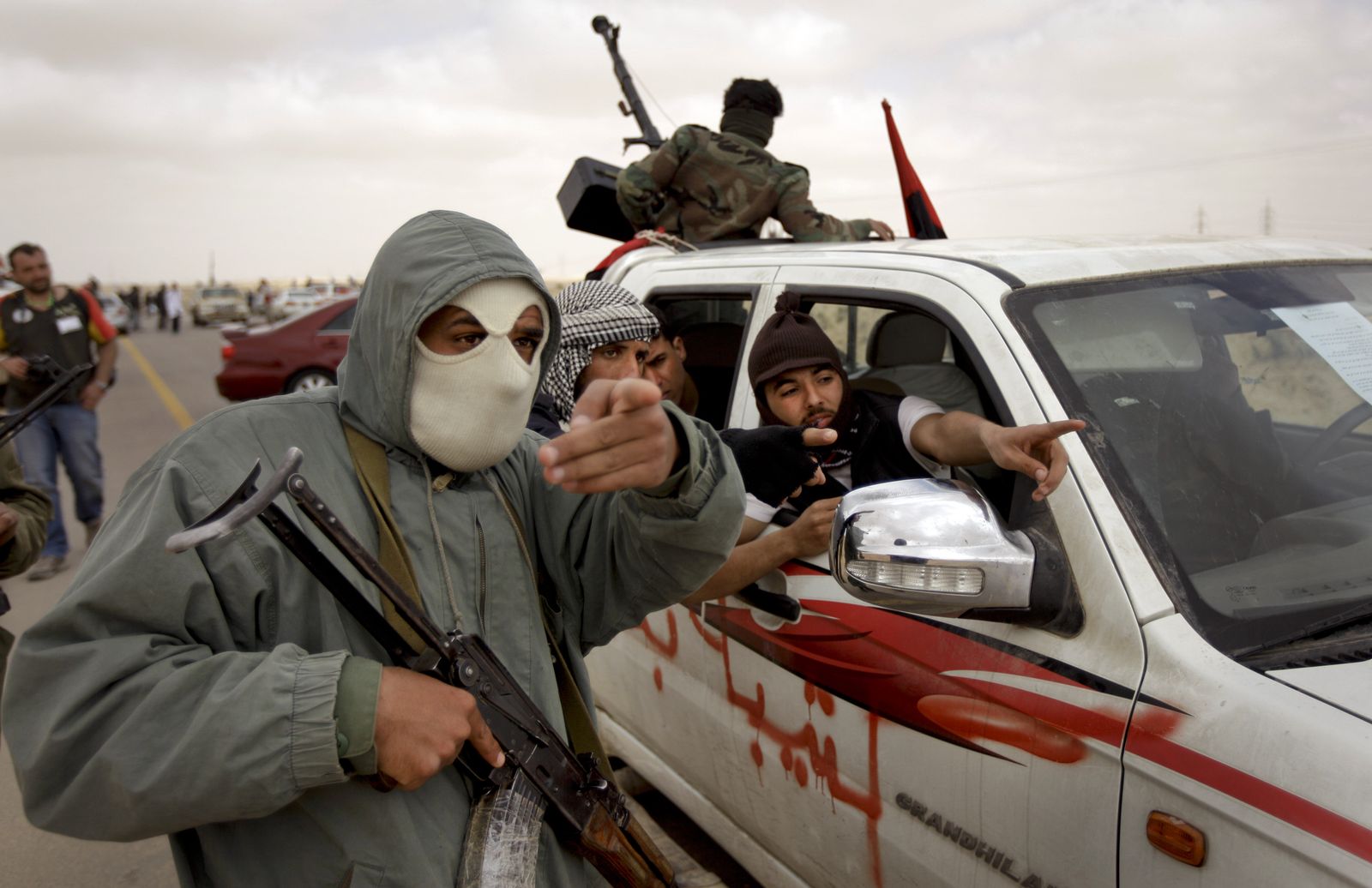 Rebel fighters in the town of Brega. Their leaders have demanded more air strikes from NATO.