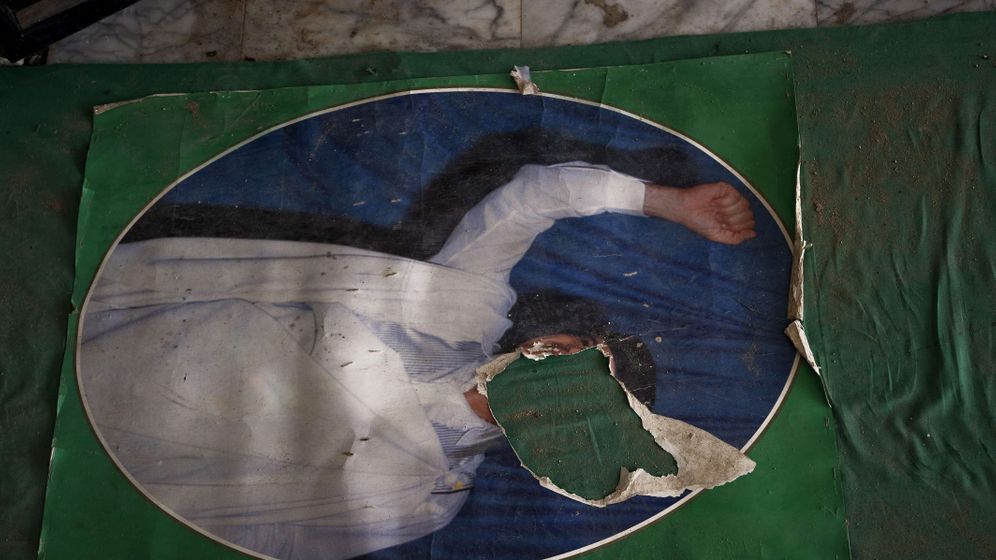 It was 9:30 in the morning on Friday when Abdel Aziz Abdallah learned that his son was dead. The 55-year-old received a phone call from an acquaintance with contacts to the unsteady regime of Libyan dictator Moammar Gadhafi. Abdallah's son Farj, just 23 years old, died in a hospital in Tripoli, the acquaintance told his father. His body will soon be brought to his hometown of Al-Bayda in north-eastern Libya for burial.

Abdallah is holding a photo of his son as the first guests arrive at the family's small garage following Friday prayers. "He was still young," he says of his son. "But he died for the right cause. He is a martyr for freedom."

Bayda is a small city on the Mediterranean coast in an area of the country that residents have begun to call "the liberated part of Libya." Gadhafi's regime has lost all control of the north-eastern part of the country and the rebels now have the upper hand.

Farj's best friend Said is in a hospital in Bayda; one of his legs seriously injured by several bullets from a machine gun. The doctor next to his bed, a Palestinian, does not have good news, saying he isn't sure that he will be able to save the limb. When Said learns of his friend's death, he becomes enraged. "This regime killed my friend," he yells. "They murdered him in the hospital."

Farj and Said were fighting on the front lines against the Gadhafi regime when they were gunned down. On Friday one week ago, the two were taking part in a protest in Bayda with 23 other friends when they heard a disturbing rumor making the rounds. A giant Ilyushin transport plane had landed at the airport carrying 400 African mercenaries. The demonstrators knew immediately what the mercenaries' mission was. As they had in other cities, the well-paid unit was to brutally crush the protests, if necessary by firing indiscriminately into the masses. Said and Farj rushed to the airport.

'We Can Certainly Take Tripoli'

The three days after the Ilyushin landed were bloody in Bayda; it was a battle that has become a symbol of the Libyan insurgency. Despite being clearly overmatched by the heavily armed mercenaries, who were later reinforced with tanks, the demonstrators fought them down and retook the strategically important airport on Monday. Since then, the battle for Bayda has become proof for many that the aims of the regime opponents can, in fact, be achieved. "If we could defend Bayda against the regime's henchmen," Said said from his hospital bed, "then we can certainly take Tripoli, even if it costs many lives." 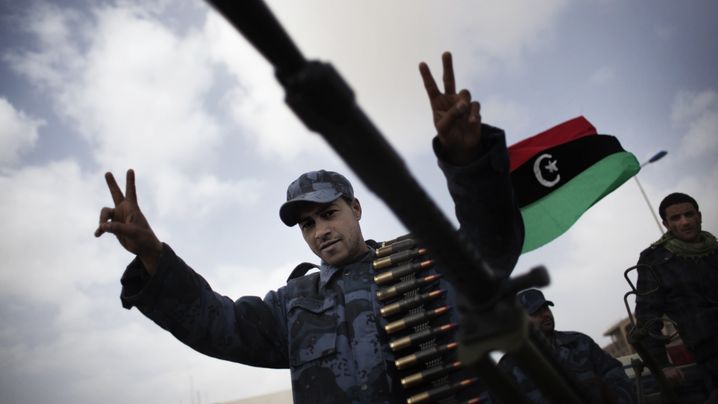 Traces of the brutal fight are everywhere on the white-tiled departure terminal at the regional airport. The ground is littered with bullet casings, weapons crates and the bloody uniforms of the African mercenaries. Among hundreds of boarding passes and suitcases, one can see trails of blood from the wounded and the dead. Jackets, caps and boots from Gadhafi's soldiers lie among ripped open first aid materials. The walls are pocked with bullet holes -- beneath the windows sit empty munitions crates, many of them once containing artillery shells, bearing Russian writing.

The world has Abdul Kadr to thank for spreading the news of the airport battle. The young student lives in a small town not far from the airport -- and he filmed the three-day-long battle day and night. From rooftops and from the street, he shot images of Ilyushins landing at the airport to send more mercenaries into the battle. Though wobbly, one from last Saturday shows a Libyan fighter jet roaring over Bayda -- and one can clearly see the jet dropping a bomb not far from the airport. A further video shows a helicopter shooting into the mass of people.

Kadr didn't sleep at all during the three days of the battle. Sitting in his parents' living room, Kadr describes how the tanks that were flown in fired on buildings outside the airport grounds. Several houses in his village were hit and four people were killed. Kadr knew how important his videos were. When the first BBC reporter made it to Bayda in the days following the battle, Kadr handed over his images and begged him to publicize them. Just hours later, they could be seen on computer screens across the globe. It was the first solid proof of the brutality that Gadhafi had visited upon his own people. It was the first solid proof that the dictator's regime had bombed his own people.

Said was the only one of his friends who survived the battle for the airport. When they first arrived at the airport with hundreds of other insurgents, armed only with wooden clubs and steel rods, the mercenaries opened fire with their machine guns. Said went down immediately as the rest tried to storm the airport doors. Wounded and in shock, Said saw how his friend Farj was captured at the airport gate. "They shot him in the leg and dragged him into the terminal," he says. Since then, Farj and the rest of Said's friends have been missing. Said assumes that they were taken to Tripoli by airplane.

In the days that followed, Said kept track of the airport battle by telephone. Over and over, he called acquaintances for news of the fight, which could easily be heard in the city five kilometers away. Said learned that the mercenaries continued firing on the demonstrators from the terminal building, even using heavy weaponry against the poorly armed insurgents. Twice they tried to advance into the city with tanks. But the rebels stopped them and captured the vehicles. Now, their burned out hulks sit on the shoulder of the road between the airport and Bayda. In the city, the flag of the insurgency is flying from the scorched government buildings, once symbols of power for the old regime.

Dozens of people died in the battle for Bayda and hundreds were wounded. Even the doctors in the clinics aren't sure how high the death toll might be, but they estimate that up to 70 may have lost their lives. Said shares his hospital room with several other badly wounded men. One lost an eye after being grazed by a bullet; another was shot in the belly.

Nasr Awad has thick and bloody bandages on his hand and leg. The doctors want to operate again in the evening and are planning to amputate yet another of the 37-year-old's fingers. Nevertheless, Awad says he would go back into battle should it become necessary. "If this revolution isn't successful," he says, "we can just go ahead and kill ourselves."

The phone call from Tripoli finally provided Said with certainty about the fate of his friend Farj. But he is consumed by a new suspicion. Doctors from clinics in the capital have called rebels in Bayda with disturbing news. Units of Gadhafi loyalists, Said said the doctors reported, are gathering up injured Gadhafi opponents so that they are unable to report on the regime's brutality. Said is certain that one of those units killed his friend.