Ali Ercans world swarms with enemies. The gray-haired professor of nuclear physics and deputy chairman of the Kemalist Thought Association (ADD) has to worry about reactionary Islamists, separatist Kurds, suspicious Armenians and Greeks, capitalist Americans and of course the European Union, with its constant pressures to reform. A bodyguard stands in front of Ercans small office on Gazi Mustafa Kemal Boulevard, round the clock.

Inside, a brass plaque greets visitors: Turkey will never belong to Europe! She will never give up her sacred sovereignty! Ercan, 55, came up with the slogan himself. Now he wants the words etched on his gravestone, he says. The Europeans come in for particular blame in this dark and dangerous time which our country is living through. Who else have encouraged Prime Minister Recep Tayyip Erdogan to Islamicize Turkey through reactionary religious forces, he says. Who else have pushed Erdogan to sell off Turkey economically and erode its national sovereignty?

Many Turks think the same way. It was Ercans association that drummed up massive demonstrations last year against Erdogans conservative Islamic-rooted government. Hundreds of thousands gathered in front of the Atatürk Mausoleum in Ankara to demonstrate against the election of Abdullah Gül, a onetime fundamentalist, as president and to rail against the foreign neo-colonial powers that backed him. The ADD is a sort of think tank for Turkeys patriotic conservatives -- and a refuge, above all, for retired military leaders.

Ercans club has gained some notoriety in recent weeks after police arrested 21 members of the secret, ultra-nationalist group Ergenekon, who are alleged to have been planning a bloody coup against the government. The chairman of the ADD, retired General Sener Eruygur, was one of those arrested in connection with the plot.

The arrest of a onetime general like Eruygur by ordinary police officers is astounding. Nothing like this has ever happened before in the history of modern Turkey. Governments have never before challenged the military -- an institution which, since the foundation of the republic by Mustafa Kemal Atatürk in 1923, has seen itself as the iron guardian of the state.

A 'Tsunami' Breaks Over the Nation

The arrest of the retired general is being regarded as a watershed moment in the power struggle between Erdogans government and the Kemalists. This struggle will continue in the courts, since the Justice and Development Party (AKP), which Erdogan and Gül lead, is in the throes of a bitter legal battle. The democratically-elected ruling party may be banned altogether. Even by Turkish standards, that is pretty spectacular.

However, as the arrests demonstrate, Erdogan is fighting back. 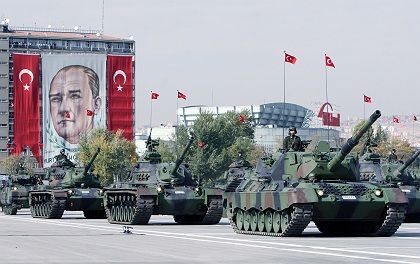 A military parade in Ankara.

The Turkish daily Milliyet described the police operation as a tsunami breaking over the nation. Several other people were arrested along with Eruygur, including another retired general, the head of the Anakara chamber of commerce, and the Ankara bureau chief of the Kemalist Cumhuriyet newspaper, which promptly accused Prime Minister Erdogan of trying to silence the opposition.

The move against the generals was quickly followed by a counter-move. On the day of the arrests Chief Prosecutor Abdurrahman Yalcinkaya presented his closing arguments in the case against the AKP. The ruling party, he said, posed a danger to the state because it wanted to establish a theocracy in Ankara similar to that in Iran. The complaint runs to 162 pages. It looks increasingly likely that the AKP will be banned later on this summer. New elections would follow and the AKP would soon be able to re-organize under a new name.

Political Islam in Turkey has gone through a number of transformations. The movement started in the 1970s with the National Salvation Party, led by Necmettin Erbakan, who became prime minister in the 1990s. This party then gave rise to the Welfare Party and then the Virtue Party. All these predecessors to the AKP were anti-Western, and were eventually banned by the courts -- but, unlike the AKP, they were not in power when those verdicts were handed down.

Erdogan was the protégé of Erbakan, the movements founding father. In April 1998, a state security court sentenced Erdogan to 10 months in jail and a lifelong ban from politics on charges of inciting hatred. The ban was later lifted. At this time Erbakan and Erdogan really did want to see a different republic, an Islamic republic, perhaps even based on the Iranian model, as the court charges today. But when their efforts continued to fail, Erdogan distanced himself from his mentor and steered a middle course -- economically liberal yet culturally conservative, which amounted to deregulation plus the headscarf, or Islam plus the EU.

The constitutional court is now expected to announce a verdict by the end of July. If the AKP is banned, establishing a new party would take a matter of days. The chief prosecutor, though, wants to keep Erdogan from leading it. Hes expected to seek a five-year political ban for the prime minister.

But what do Erdogan and Gül want? Will they keep to the middle path, or is their aim really the Islamicization of the secular Turkish republic? The Kemalists are convinced that the ruling duo want to turn the nation into a religious republic. President Gül, on the other hand, thinks the true danger lies with the Kemalist conspirators.

However, one thing is undisputed: There is a secret group called Ergenekon and it did plot a coup. It's possible that the group was formed on the periphery of the ominous "Gladio" network -- clandestine NATO "stay-behind" units which were intended to defend countries against Soviet attacks during the Cold War. Ergenekon's attention, however, was focused domestic enemies, such as minorities and liberals, and intellectuals like the Turkish-Armenian journalist Hrant Dink, who was gunned down on a public street in January 2007 or Nobel Laureate Orhan Pamuk, who has reportedly received death threats.

The police first uncovered the coup plot when they found a stash of weapons and explosives in the Istanbul neighborhood of Ümraniye back on June 12, 2007. A retired officer was involved and an investigation began into a group whose name resonates in popular folklore -- Ergenekon is a mythic valley in central Asia, where the original Turkic tribes are thought to have lived in the far distant past. It would have been a pure Turkish society without minorities or dissenters -- the kind of society ultra-nationalists would like to see in Turkey now.

In January the lead conspirators were arrested, including retired Brigadier General Veli Kücük and the far-right radical lawyer Kemal Kerincsiz. Documents found in their possession supposedly proved that Ergenekon had intended to sow chaos and fear by carrying out a string of murders. In the ensuing civil war-like climate, the military would then have stepped in to establish law and order. But the plan failed. The state is functioning, Prime Minister Erdogan said after the first arrests.

In March there was a second wave of arrests, but this time the list of suspects looked more questionable: Was it plausible that the aging Cumhuriyet journalist Ilhan Selcuk, who argued for free speech during Turkeys military dictatorships, really belonged to a circle of anti-democratic plotters?

Meanwhile the power struggle on the Bosporus has grown increasingly complex and confusing -- its no longer a simple equation of secularists against the faithful. Its unclear, for example, how deeply the army itself is implicated in the Ergenekon network. It is also obvious that the government has been keen to exploit the coup arrests in their battle against the Kemalists.

Just how serious the crisis is can be seen in its damaging effect on Turkey's economy. Political stability is down the drain, says Güldem Atabay, chief economist at Ekspres Invest in Istanbul. These developments have scared off foreign investors, who want guarantees of stability, she says. Turkey relies on foreign capital. If the tension increases after the AKP is banned, Atabay predicts a period of chaos and a general decline on the stock market.

Kemalists like Ali Ercan, though, would welcome that turn of events. The deputy chairman of the Kemalist Thought Association sees nothing but a shining future for his nation. Back to our own resources, is his motto, meaning: Turkey doesnt need foreigners.