It wasn't long before Csaba László learned one of the fundamental truths about Africa. László, a temporary resident of the Sheraton Kampala after being hired to coach the Ungandan national football team, thought he was hearing things as he relaxed on the hotel terrace one evening. It was a Wednesday night, when suddenly a great cheer went up -- "Goooooooooooaaaal!" The cheer was so loud that László thought there must be a match going on in the area. But then he heard the same chorus from a different direction. "Goooooooooooaaaal" from the north and another from the south. 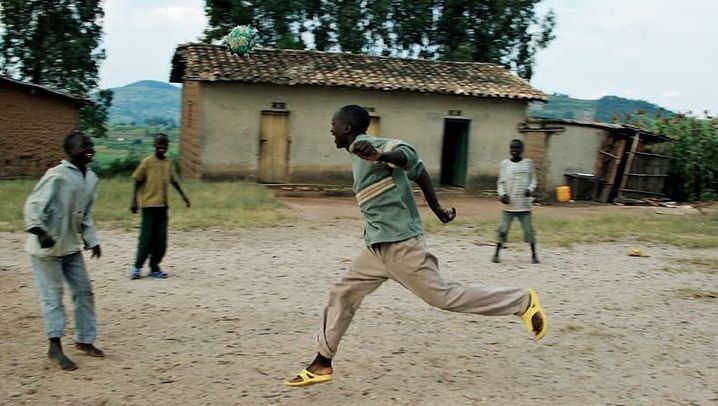 Photo Gallery: The Passion and Pleasure of African Football

The Hungarian coach was perplexed. "There must be a lot of stadiums here, with a lot of games and a lot of fans," he thought to himself.

But he was wrong. In Africa, one is never far from football. That Wednesday was merely business-as-usual -- the Premier League in far-away England was playing. And when the teams take the field on Anfield Road or on Stamford Bridge, then half of Kempala gathers in front of television screens across the city, a Bell beer in hand and wearing the jersey of their favorites. Indeed, more than four decades after the end of British colonial rule in Uganda, the popularity of their football teams mean they are as present as ever.

The contrast with Europe could hardly be greater. Those arriving in Germany for the first time initially notice the well-tended hedges, graffiti-covered buildings and jam-packed shop windows bathed in neon light. They see pedestrians wrapped in heavy coats waiting patiently at red lights, cars that glide by without a chorus of honks and walls of yellow, green and black garbage cans.

But football in Germany -- which has won both the World Cup and the European Championships three times -- is largely kept out of sight. One tends to see the game only in stadiums, fenced-in municipal fields or in private clubs -- or, of course, in sports bars.

It wasn't seldom in recent years that football provided my only solace as I traveled to the continent's many epicenters of suffering. In refugee camps in Sudan and Chad, for example, I took consolation from the faces of laughing children from Darfur as they chased a football through the dust or boys from Chad who played soccer with a sphere not much larger than a tennis ball. On the return from Congo, my driver Callixte and I liked to stop at one of the small settlements between Kigali in Rwanda and the war-torn city Bukavu to play a quick game of football with half the village. The ball was often just a bunch of plastic bags tied tightly together.

In Mogadishu, Somalia, I was amazed to see young men retrieve their plastic balls from bullet-perforated ruins as soon as the fighting stopped. It seemed as though every pause in the gunfire was used for a quick match -- sometimes even between warring clans. In the Congolese city of Goma, which all too often has become a symbol for African decay, I watched a game on the deep black lava fields of Nyiragongo, which had just erupted mere weeks previously. And in Kenya's capital Nairobi, I followed youth teams as they kicked a leather ball through slums that had been in flames just a short time before.

'The Reason We Have Feet'

"We wake up in the morning and breathe football," former Congolese striker Pierre Kalala told the documentary filmmaker Hereward Pelling. "Football is the reason that we have feet."

"It is a part of us. We play behind the houses, on the street, in any small area we can find," said former Ghana national team player Abidé Pelé. How true.

When UN aircraft glide into Abidjan, the economic capital of war-torn Ivory Coast, "their descent takes them over the two or three thousand football matches being played below," SPIEGEL reporter Ullrich Fichtner wrote in his 2006 story about the country's impending appearance in the World Cup that year.

All of us have images of the lost continent in our minds: draughts, starvation, violence, disease. It would seem to be a hopeless patient. The most common story out of Africa is that of yet another stream of refugees escaping yet another megalomaniacal tyrant. Joseph Conrad called it the "Heart of Darkness;" Henry Morton Stanley called it the "Dark Continent." And it is difficult for us to look beyond these clichés.

But those who are familiar with just this African reality cannot truly understand the continent.

Wonderful in its Simplicity

In no other place have I seen as much joy as in this supposed region of misery: more people smiling, playing and dancing. When asked by the South African football magazine SoccerLife2 about what makes him African, the Cameroon star Samuel Eto'o responded "My satisfaction. My passion for playing soccer. But I've had to change myself. In Africa, I played for fun; in Europe, I play to win." Life in Africa doesn't take place between cement walls or chain-link fences or cars with chrome-plated hubcaps -- primarily, it must be said, because they lack the money for those sorts of things.

Soccer is also an African game because it is wonderful in its simplicity. It doesn't require any money or any expensive clothes -- just a few young people with spare time. In Africa, people learn quickly that you don't even need a real ball to play with. Scraps of cloth, plastic bags, old newspapers and twine or tape will suffice. You can even dribble or pass barefoot, and a pair of sandals made from car tires is all you need to shoot a goal. And does the keeper really need gloves? A goal can be quickly put together using two logs and a pile of clothing or cardboard boxes, even if it doesn't meet the 2.44 meter high by 7.32 meter wide norm required by FIFA.

This isn't lost on German soccer legend Franz Beckenbauer, who has traveled widely across the continent. "In Africa, professional soccer may still be a bit underdeveloped," he has said. "Many talents are flocking to Europe to make money. And they all notice one thing: Professional football as we know it has lost its originality -- it's lack of self-consciousness and its simplicity as a game. To tell you the truth, that hurts."

There are differing opinions over whether these adverse playing conditions can help to foster talent or not. French trainer Claude Le Roy believes that the catastrophic conditions increase the technical skills of African players. But former German national team player Jens Todt, who had the opportunity with Hamburg's HSV football club to create a soccer school in West Africa, observed: "The fact that many Africans can't shoot properly is due to the fact that they have no nets. If someone kicks the ball at full force, he then has to run after it in order to keep playing. That's why African soccer players prefer to dribble the ball into the goal." Hardly surprising.

The fact is, though, that African football teams are seldom truly successful. They may often win youth championships at all levels and have even scored gold at the Olympics. Nigeria became the Olympic champions at the Atlanta Games in 1996 and Cameroon won four years later in Sydney. But what does that mean? National teams representing East Germany, Belgium and Canada have also won the Olympics. In 1962, Walter Winterbottom, who was then the English national team coach, first prophesized that an African country would win the World Cup during the 20th century. But the world has been waiting ever since.

By now, every child in Europe knows the lamentation of Francois Oman-Biyik, described in 1990 by sports journalist Harry Valérien as a "tall and graceful attacker." "It is time for people to understand that we are not gorillas, and we don't hang from trees eating bananas," he said. Back then, the Lions Idomptables (the untamable lions) of Cameroon succeeded, one after the other, in beating Diego Maradona's Argentinians, Gheorghe Hagis' Romanians and Carlos Valerramas' Colombians. But the team lost during extra time in the quarterfinal against a rather average English team (Peter Shilton, Paul Gascoine, Gary Lineker).

Since then, African teams have often been tipped as insider favourites at international tournaments. Jay-Jay Okocha and Anthony Yeboah have enchanted Germany's Bundesliga, George Weah was crowned European Footballer of the Year, and African players in Europe have helped make their teams the world's best, like Samuel Eto'o at FC Barcelona, Didier Drogba at Chelsea FC and Nwankwo Kanu at Ajax Amsterdam.

But no African team has ever made it past the quarter-finals at a World Cup -- and despite all the African football magic, cultural misunderstandings are still the order of the day when Europe encounter's the continent's soccer phenomenon.

At least on the playing field. Just take Gerald Asamoah, a forward for Germany's Schalke. A referee once told him, in pigeon German, presumably so that Asamoah, fluent in German, could understand: "You, number 13, no dive. Otherwise you go from pitch." Germany can be silly sometimes.