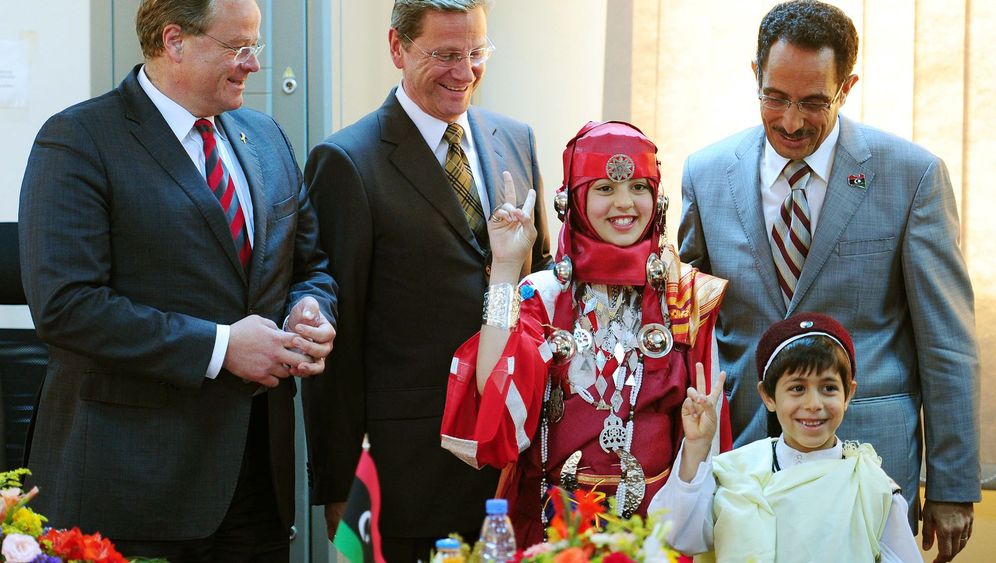 Ahmed Jibril wages the war against the dictator Moammar Gadhafi in a small, yellow house near the harbor in Benghazi. There are no weapons here, and some don't even have a computer, as they sit in front of scratched desks on stacks of corrugated floor covering. They are the 14 employees of the new foreign ministry, which was once only a branch of the ministry in Tripoli before the entire staff joined the revolution. Only one member, its former head, is no longer there, having fled to Egypt.

Jibril, the new spokesman and chief strategist of the rebel diplomats, only needs a map to highlight the success of the revolution. There are 25 dots -- green, red and many others in yellow -- affixed to this map in the foreign ministry. Green: The country recognizes the Transitional National Council as the legitimate representatives of the Libyan people. Red: The country sees the transitional council as a legitimate negotiating partner. Yellow: Undecided.

The green dots on the map are stuck to France, Great Britain, Italy, Malta, Canada and Qatar, and even to faraway Australia. Since last Monday, when Foreign Minister Guido Westerwelle traveled to Benghazi to officially open a liaison office there, Germany also has a green dot.

As a diplomat working for Gadhafi's government 37-year-old Jibril was stationed in New York and Bosnia. Today he spends much of his time rushing around Benghazi, trying to coordinate all the conferences, state visits and delegations. His world has suddenly grown larger, now that the visits of various foreign ministers need to be planned. The rebel government in Benghazi must win over Arab countries that haven't taken sides yet, as well as the many African governments that still support Gadhafi.

"Our goal is five dots this week," says Jibril. The rebellion has already lasted four months, and with each new week it is becoming increasingly clear that a military solution will only be possible at the cost of a bloodbath in Tripoli. In other words, political pressure is imperative to forcing a relatively peaceful withdrawal by Gadhafi. As a result, the people in suits are becoming more important than the young rebel fighters.

The rebel government now has a foreign minister, it has both newly appointed and well-known envoys and officials and, of course, it has the omnipresent but constantly moving Mahmoud Jibril. A former economic advisor to the Gadhafi family, Jibril is now the prime minister of the transitional government and spends much of his time traveling the world campaigning for diplomatic support.

Ahmed Jibril, who is not related to the prime minister, also speaks with employees at the foreign ministry in Tripoli every day. "They are now very critical of Gadhafi. Ninety percent of the diplomats there are on our side, including many senior officials," Ahmed Jibril claims. Unable to speak directly by telephone, they communicate via Skype. Still, says Jibril, they watch what they say, because they being spied on and blackmailed. "The regime is holding the families of important politicians as hostages to prevent them from fleeing. That includes the family of the foreign minister," he says.

Meanwhile, the world is sending its diplomats to Benghazi. Hundreds have already been to the city or are there now, opening new consulates and liaison offices. Benghazi has turned into a test case for international law. The situation there is unprecedented, with a rebel government being recognized by the world and visited by politicians, even as the rebels continue to battle the army of the country's ruler. There is an odd feeling of simultaneity between the acts of overthrowing the regime and rebuilding in Benghazi these days.

Gone is the euphoria of the first few weeks, when local residents painted their cars, garden gates and even entire houses in the red, black and green colors of the revolution. Shops have reopened, there are traffic jams in the middle of the night and volunteers are repairing potholes in the streets. Life behind the front is almost cheerful, and from the vantage point of Benghazi, the images of the bombardments and fighting in western Libya seem almost as distant as the uprising in Syria.

The revolution has entered a new phase. Rebel border guards are now stamping immigration forms at the Egyptian border. The transitional council has voted to establish a news agency, an airport authority and an intelligence service. The voluntary militias are now called the National Liberation Army. Several commissions are developing a constitution.

The question now is no longer whether Gadhafi will be brought down, but what happens afterwards. "Our biggest concern is a power vacuum on the day after Gadhafi steps down," says a European diplomat. For this reason, international experts are trying to prepare for regime change as effectively as possible. They are working on scenarios for taking over Tripoli. They are searching for ways to avoid both a massacre by Gadhafi's troops and the humanitarian disaster that could result from the expected lack of water and electricity. At the same time, talks are underway with Gadhafi's government officials and contacts as more members of the transitional council are prepared to negotiate. Even the idea of the dictator being placed under house arrest inside Libya is now a possibility.

The center of transitional diplomacy at the moment is the Hotel Tibesti, a monstrous concrete tower on the shore road, where porters are now pushing luggage carts loaded with espresso machines through the lobby. At one point, envoys from nine European Union member states were staying at the hotel. The EU itself has taken over an entire wing of the hotel, although it has only dispatched a single diplomat to date. He is the Polish official Jeremy Nagoda, who is now sitting behind a rococo desk, flanked by ornate, curved armchairs, decorative bowls and vases.

Nagoda has been in Benghazi for three weeks now. A coffee-table book on Libya, a map and a book titled "Arab Media" are on his desk. He describes his mission as follows: "We are trying to determine what is happening here, and then we will try to establish a situation that we can live with." Above all, this means an end to the war and an elected government that grants freedom to its people, keeps the Islamists under control and prevents African migrants from traveling across the Mediterranean to Europe. Nagoda doesn't put it this way, of course, and, like all of the other diplomats in Benghazi, he doesn't want to be quoted. The official goal of the NATO mission in Libya is to protect the civilian population. But the diplomats' mission is regime change.

The EU's exact role in Benghazi remains unclear, perhaps even for Nagoda. This is probably because every member state has its own position in a war that, at least to some extent, revolves around national interests.

There is the Italian envoy who, as one of the first to arrive -- with a dinghy some three months ago --, hopes to re-establish Rome's influence. Italy's Eni is the largest foreign oil company in Libya, and the country supplies almost a quarter of the oil consumed in Italy.

There is Malta, which is now trying to transfer its good relations with Gadhafi to the rebels, and there are France and Great Britain, the leaders of the NATO mission. Both countries want to prevent Libya from turning into an Iraq at Europe's doorstep. Germany is there too, subletting space in the Swedish consulate general. Berlin's new liaison office is the smallest diplomatic entity to be found in Benghazi, consisting of a representative, a driver and an interpreter. Things are not easy for Dietrich Becker, the German mission chief. Not a single German flag flies amid the French flags across the city.

Jordan, Greece, Turkey and the African Union also have diplomats in Benghazi, and even Russia and China have sent an advance guard, despite fears that the Libyan revolution could set a precedent in international law that undermines national sovereignty and could be used against them one day. The United States also has a suite at the Tibesti, although the superpower is behaving so inconspicuously that it could almost be overlooked. There is not even a US flag hangs at the entrance.

These United Nations of Benghazi convene at the Tibesti, which also makes the hotel a target for all the forces that still support Gadhafi. EU representative Nagoda opens his laptop and shows us photos of burned cars in front of the hotel after an attack in early June. He fears that things will not remain quiet in Benghazi for long.

The rebels now station armed guards at the front entrance, the driveway has been blocked off and concrete barriers have been installed. A bomb disposal robot makes the rounds of the hotel lobby, while a bomb-sniffing dog is kept outside. Inside Tibesti, politicians, diplomats and adventurers drink tea and smoke cigarettes late into the night, while intelligence personnel and bodyguards lurk in the corners. The rooms are bugged, says one diplomat. By whom? "All the major agencies are here," he whispers.

The air is as thick with rumors as it is with cigarette smoke. A Libyan man says that prisoners can now buy their way out of Tripoli jails for a few thousand dinars. Others claim that Shell has already made a deal with the transitional council. A diplomat says that Qatar is also supplying weapons to fundamentalist militias.

Mahmoud Shammam also has something to say about Qatar as he leans back into one of the hotel sofas, a broad-shouldered bodyguard watching over him. Shammam left Libya 35 years ago and returned in early May. He was a member of Al-Jazeera's board of directors in Doha, and he is now the minister of media for the interim government. "We get everything from Qatar, we get the whole Qatar," he says with a booming laugh. "No other country gives us as much support." Qatar has already spent hundreds of millions of dollars on gasoline, relief supplies and weapons. Doha plans to transfer another $300 million (€211 million) to the rebels' account, which was opened in Doha, of course. There is a daily direct flight between Doha and either Benghazi or Tobruk.

Why is the small Gulf emirate, a monarchy, supporting a revolution? Qatar wants to expand its influence in North Africa, says Shammam. Others speculate that Qatar is thinking of bringing Libyan natural gas to Europe and thus compete with Russia.

In Benghazi, at any rate, Qatar is doing its best to remain invisible. The desk clerk at the Tibesti claims there are no Qataris in the hotel. But they booked the entire 10th floor, where there are muscular bodyguards jogging up and down the hallways. When asked about their duties, they remain taciturn, saying that Qatar is merely fulfilling a humanitarian mission, flying in medication and evacuating the wounded.

The souvenir dealers in the old part of the city seem to have the best insights on which countries are the most popular in Benghazi at the moment. A boy there is selling revolutionary armbands, bags and sunshades, as well as hand-sewn flags from France, Great Britain and the United States. They are selling well, he says. And Qatar? Sold out, he says with a grin.