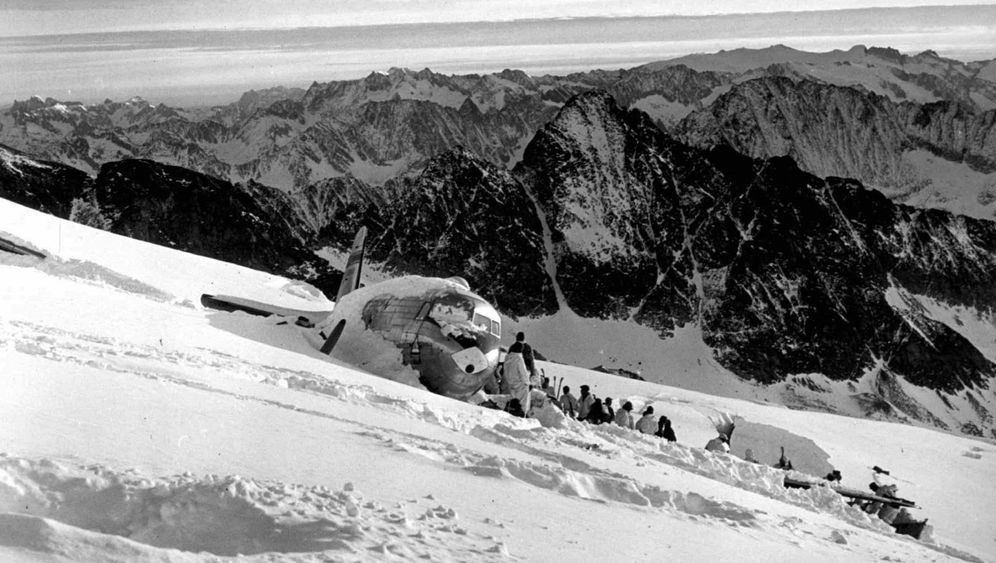 For the first hour of its flight, the American C-53 Skytrooper military aircraft glided gently and peacefully through the air with no hint of the forces that would soon take hold of the propeller plane.

Then, from one second to the next, treacherous pockets of turbulence hurled the craft 300 meters (1,000 feet) up, then hundreds of meters down. The plane -- along with its four-member crew and eight passengers -- ultimately crashed into the Gauli Glacier in Switzerland's Bernese Alps while traveling 280 kilometers (170 miles) per hour.

The pilot had spent the preceding 25 minutes flying blind over the mountains at an altitude of approximately 3,350 meters (11,000 feet). In fact, it's something of a miracle that the plane didn't smash into one of the alpine peaks that can climb up to 3,600-meters (11,800-feet) high.

The plane's passengers also had incredible luck while it was crash-landing. The plane skidded uphill and straight toward a deep crevasse. But, just a short distance before the abyss, a snow bank caught the speeding plane's right wing, spinning it around until it came to a halt.

But there the 12 Americans' luck ran out, at least for the time being. They toughed it out for five days and nights there, stranded in deep snow on the mountainside. This was November 1946, with temperatures of minus 15 degrees Celsius (5 degrees Fahrenheit) and icy winds. But when help finally did arrive five days later, it unexpectedly came from the air.

Researchers at SPIEGEL TV worked together with Swiss military researcher Roger Cornioley on a documentary reconstructing the dramatic events that led to the spectacular rescue of the stranded passengers -- and the birth of alpine air rescue.

Lost in the Alps

On November 19, 1946, the American plane took off from Munich at 1:05 p.m., headed for Marseille, in southern France. But the pilot, Captain Ralph H. Tate Jr., soon deviated from the planned flight path, and the aircraft disappeared into Alpine fog.

With several high-ranking members of the American military onboard the plane, the US Army immediately launched a full-scale search effort for the victims of the crash. But the mission was destined to fail, since the military was looking for the plane in the French rather than the Swiss Alps.

Tate and his crew had no idea where they'd crashed, so they were unable to offer much help on the radio regarding their location. The American military, meanwhile, was using heavy B-17 "Flying Fortress" bombers to search from an elevation of 5,000 meters (16,000 feet) for the missing crew, whose situation was growing increasingly critical.

In the crash landing, one passenger had suffered a compound leg fracture after being flung together with his seat through the cabin. Others had suffered bad contusions, while hunger, thirst and cold affected everyone alike. Shaking in the icy cold, they wrapped themselves in the plane's parachutes to survive.

On November 21, two days after the plane left Munich, Tate sent out a last, desperate radio message on behalf of all onboard, stating that they there were some people with injuries and that they would probably only be able to hold out for another 24 hours, at most.

A storm eventually rolled in and covered the downed plane with snow, making the aircraft virtually invisible from above. On November 22, three days after the crash, hopes of a rescue were quickly growing dim.

But then the tide of events turned in a manner on par with anything that Hollywood could dream up.

The father of the downed pilot was among those flying the search mission for the stricken aircraft. General Ralph Tate Sr., flying in a massive B-29 bomber, was already turning back from his current search empty-handed, when his droning aircraft unexpectedly passed over the site of the crash.

The crew immediately sent up red signal flares to indicate their location. Tate Sr. answered with a green flare. The batteries in the crashed plane's radio had run down by this point, and Tate Jr. was only able to turn it back on for a few seconds. When he did, he recognized his father's voice on the other end of the line. "Hi, Dad," he called, and he was just able to hear a response of, "Hi, Ralph, how…" before the connection went dead. Still, Tate Jr. now knew that his father would be able to report the coordinates of the crash site.

The US Army promptly prepared to carry out a rescue effort on the glacier, with 150 mountain-infantry soldiers from the 88th Infantry Division setting out in jeeps, ambulances and tracked vehicles.

However, the Swiss feared a fiasco, warning the Americans that they would not be able to conquer the mountain in such vehicles. That was the Americans' usual method, says historian Cornioley with amusement, one for which "you always needed a right foot to operate the gas pedal."

The US military's efforts to help those stranded on the mountainside were also only somewhat successful. Planes dropped care packages from 4,500 meters (14,800 feet) above the snowed-in crash victims, but most of those packages sank without a trace into the snow or slid into the mountain crevasses. One 60-kilogram (130-pound) bag of coal slammed into the wing of the wrecked airplane, making the intended recipients nervous. One passenger hurriedly wrote "FINI" ("finished") in large letters in the snow.

At 4:15 on Saturday morning, the Swiss military also sent out an 80-strong rescue team on foot. A fatalistic mood set in among the brave mountain guides when they realized that, due to incorrect coordinates, their team would now need to fight their way through sometimes chest-high snow for 13 rather than nine hours.

Exhausted, hungry and soaked to the skin, the men completed their arduous march to the crash site, but the enthusiasm of those they'd come to rescue was short-lived. They wondered how this haggard bunch was supposed to accomplish the 36-hour evacuation when some of them were in particularly bad shape and the terrain was virtually impassable terrain.

But in the morning hours of November 24, after five extremely trying days, the drama surrounding the crashed airplane once again took an unexpected turn when two "Fieseler Storch" planes circled above the rescue team on the upper part of the glacier.

Onboard were Captain Victor Hug and Major Pista Hitz, both Swiss military pilots, who dropped a messenger bag informing those stranded below of their daring plan to land on the glacial plateau.

The small Storch planes could touch down on nearly any surface and could become airborne at speeds as low as 50 kilometers per hour (30 mph). But a landing on a snow-covered glacier would be a bold and unprecedented maneuver.

Hug and Hitz were no maverick daredevils. During World War II, Swiss pilots had intensively practiced taking off and landing in snow in order to be prepared for possible emergency landings in the mountains, but a takeoff from a glacier had never been attempted in practice. Still, the two pilots improvised by attaching runners to the undersides of their planes in preparation for their novel mission.

The rescue mission succeeded. Seven hours later, the last passenger from the downed plane was flown out to a military airport in the nearby town of Meiringen-Unterbach. There, General Ralph Tate and his son, with a bloodied turban wrapped around his head, fell into each other's arms.

It became clear the next day just how close the passengers' brush with death had been, as a storm system moved in and dumped snow on the crash site for three days in a row. After that storm, Swiss historian Cornioley explains, there was "no sign left anywhere" of the crashed plane.