Tired of being bossed around? Want your neighbors to treat you with more respect? Want to play in the majors? If so, you have to have your own nukes.

Impossible? Not really. Granted, if your country is a signatory of the Nonproliferation Treaty (NPT), as most countries are, the constraints on your bomb building are considerable. Inspections by the International Atomic Energy Agency (IAEA) are difficult to circumvent. And the IAEA can no longer be fooled as easily as in the 1980s, when it failed to uncover Saddam Hussein's military nuclear program in Iraq despite regular inspections.

The IAEA's increased awareness means that you have to be imaginative. Here are some steps to consider.

First, begin developing a civilian nuclear program. Under the NPT, you are not only entitled to a civilian nuclear program, you may even ask for help from the IAEA. The IAEA will provide you with the basic ingredients and much of the know-how for a military program. Moreover, you can legally buy reactor fuel, and thus do not have to acquire it by performing hair-raising stunts like those the Israelis pulled in 1968, when they had to hijack a ship carrying uranium after France stopped its supplies.

As you start building your civilian nuclear infrastructure, which should include nuclear plants to produce plutonium and/or uranium and appropriate nuclear research facilities, aim for the full fuel cycle: mining, milling, conversion, enrichment. This allows you the greatest possible independence -- which you may need later, once you are caught or go public. And let there be no mistake: You will get caught.

But the notion of getting caught need not concern you at this stage. You will need to build research and nuclear enrichment facilities at several sites. Some will be publicly declared sites, i.e. they can be inspected by the IAEA. Other facilities, however, will remain secret, preferably underground or in mountainous areas (you did not forget to buy advanced drilling equipment, did you?). It is within these military facilities that enrichment of reactor-grade uranium to weapons-grade levels, as well as plutonium reprocessing will take place. If you are not too concerned about raising international suspicions, you can be so bold as to invest in other nuclear activities as well, such as nuclear submarine propulsion. Dubious? Yes. Illegal? No -- ask the Brazilians.

Getting Off the Ground

In order to run your secret military program, you need to buy a lot of stuff. Try to be discreet. Once you have raised suspicions, you will be put under international surveillance, and buying critical components will become much harder. Make sure you buy nuclear components from several sources so that you have backups in case one seller drops out. You will be less visible if you use intermediaries to buy certain things for you. In some cases, you may have to buy and then reverse engineer certain technologies. Others have done it in the past, so can you. Intrigued? Ask the Pakistanis.

Too bad A. Q. Khan, the father of all nuclear smugglers, is no longer in business. He could have supplied you with everything you need to give the United States the finger: from centrifuges all the way to warhead designs. With Khan's help, Libya almost made it into the nuclear club. But along came the Bush administration and shut down the Khan franchise. As a consequence, buying all the necessary items will now take longer and will probably cost you more; but, with enough patience and money, you will still be able to get what you need. North Korea will help you, just as they offered to help Iran and Syria. You need nukes; they need hard currency -- a match made in heaven.

If this direct approach is too risky for you, do not despair. Instead, help fund the nuclear program of another would-be nuclear power. In return, you may receive certain nuclear components -- or even warheads -- when you deem that the time has come for them to return the favor. For confirmation, ask the Saudis why they used to finance A. Q. Khan's laboratories.

It's Best to Go Ballistic

To be a credible nuclear power, you need appropriate systems to deliver your nuclear weapons. One method of delivery uses dual-capable carriers, such as aircraft and cruise missiles. They are not too difficult to purchase, but let us be honest: Ballistic missiles are the real thing. To obtain them, you do not have to work alone. If you designate your missile program as a "space launch" program, other states can legally support you, just like Russia is doing in Iran. And even when you have missiles that are obviously not intended for a space program, you can team up with other countries and share test results, as do North Korea and Iran. Sharing test results cuts development time and costs.

When deciding on warhead design, you can play it safe and simply buy some older Chinese or Pakistani designs. These designs have been in circulation for quite some time, and are readily available on CD-ROM.

Once you have built a nuclear weapon, you may want to test it. Of course, you could get around testing by choosing a weapons design that does not require testing, like the first U.S. nuclear bomb from 1945. If you want your weapon to be more sophisticated, however, you need to be creative. The old trick of staging a "peaceful nuclear explosion" will no longer suffice, since no one is going to believe that you need nukes to dig a canal or blow away a mountain. But with a bit of luck, you will find another nation that still conducts "real" tests and allows you to bring your scientists and your technical equipment along for the event. North Korea is a strong candidate, and has acquired a considerable amount of foreign currency that way. You can also try to have another nation test weapons on your behalf, as South Africa did for Israel, and China did for Pakistan. Or you can conduct a "cold test," without the fissile material. This gives you at least some reassurance that your warhead design will work in a pinch.

Becoming a nuclear weapons power takes years, perhaps decades. So how should you behave internationally while secretly working on your nuclear program?

As a general rule, keep a low profile, even at NPT Review Conferences. Of course, nothing is wrong with you joining in the ritualistic condemnation of the "double standards" of the Nuclear Weapons States, or with arguing for a nuclear free zone in your region. But you should leave the most vocal attacks to others. There are enough diplomats desperate to bask in their 15 minutes of fame by taking on the Nuclear Weapons States during the NPT Review Conferences.

Rally the Non-Aligned Movement (NAM) around your cause. Find a few anti-Western countries to front for you. Systematically demarche capitals of small countries whose diplomats try to inject some reason into NAM statements. Raise the topic of Israel. And if the UN Security Council should pass a non-binding resolution about global nuclear disarmament, try to keep a straight face and agree.

Getting Caught: Control the Fallout

You will get caught, either by a US spy satellite (as in the case of North Korea), a disgruntled defector (as in the case of Iraq), or even an indigenous human rights group (as in the case of Iran). So what should you do if you get caught? First and foremost, do not overreact. Deny. Should the evidence become too powerful, then, change tack. Create a distraction. Argue that the uranium particles found in your country were purposely scattered by a hostile nation. Challenge the credibility of the information provided to the IAEA. Bring up Israel again.

Once these lame excuses have run out of steam, shift gear. Admit that you have indeed failed in certain cases to be as open as the NPT requires. Promise to cooperate with the IAEA from now on. But never admit that you are seeking anything beyond nuclear energy. If you are a Muslim country, you can also cite some arbitrary fatwas that argue that nuclear arms are incompatible with Islam. If none can be found, have one written by a clergyman.

Most importantly, continue to insist on your "inalienable right" to peaceful nuclear energy. Since the NPT is not very precise, the international community may spend years trying to agree what to do with you. Claim the "nuclear powers" are trying to deny your nuclear rights and protect the political and economic benefits of monopolizing nuclear weapons and energy. Accuse the IAEA of bias. Raise Israel again.

Once you have mastered the complete fuel cycle, you could, in principle, declare yourself a nuclear power. But since you want to become a true Nuclear Weapons State, you need to achieve weaponization. Should your program become the subject of international negotiations before it has reached that critical stage, the key will be to buy time. Offer concessions. Then take them back. Offer them again, etc., etc. The Security Council will seek to punish you, of course, but the rivalries in that body almost guarantee that no serious punishment will ever be set. If you have access to oil and gas, you are even better off; one or more P-5 members will need your natural resources so badly that they will protect you from severe international pressure.

You can also count on the support of others. The IAEA, for example, will be divided into those who believe that a true watchdog should also bite, and those who feel that they must side with the underdog, i.e. with you. Many non-proliferation experts will take your side as well, writing thousands of pages arguing that you are innocent until proven guilty. Although by this point, buying more paraphernalia for your program on the international market may have become next to impossible, at this stage you should be able to run your program without outside help.

Fortunately, time is on your side. Do not blow it by issuing extreme public statements, such as describing your neighboring countries as a cancer that needs to be eliminated. Maniacal outbursts do not go over well, even with the countries that sympathize with your cause. Also, never argue that you need nukes because your neighbors have them, as that would give away your true intentions. Instead, always claim that your conventional defense capabilities are sufficient. You will appear less suspicious, which is necessary to deter your nervous neighbors from preemptively knocking out your nuclear program.

The last choice for you to make is whether to remain a "virtual" nuclear power or announce your arrival with a big bang, i.e. with a nuclear test that establishes your credentials as a Nuclear Weapons State. By this point, you will have spent billions of dollars and much political capital. You may have become an international outlaw, and if you do not control oil, your country may now be impoverished. A decline in relations with your neighbors is complemented by an increase in number of alliances against you. Does all this add up to a net gain? Well, perhaps not quite as good an outcome as you had initially hoped. But no one ever said that being a nuclear power is easy. 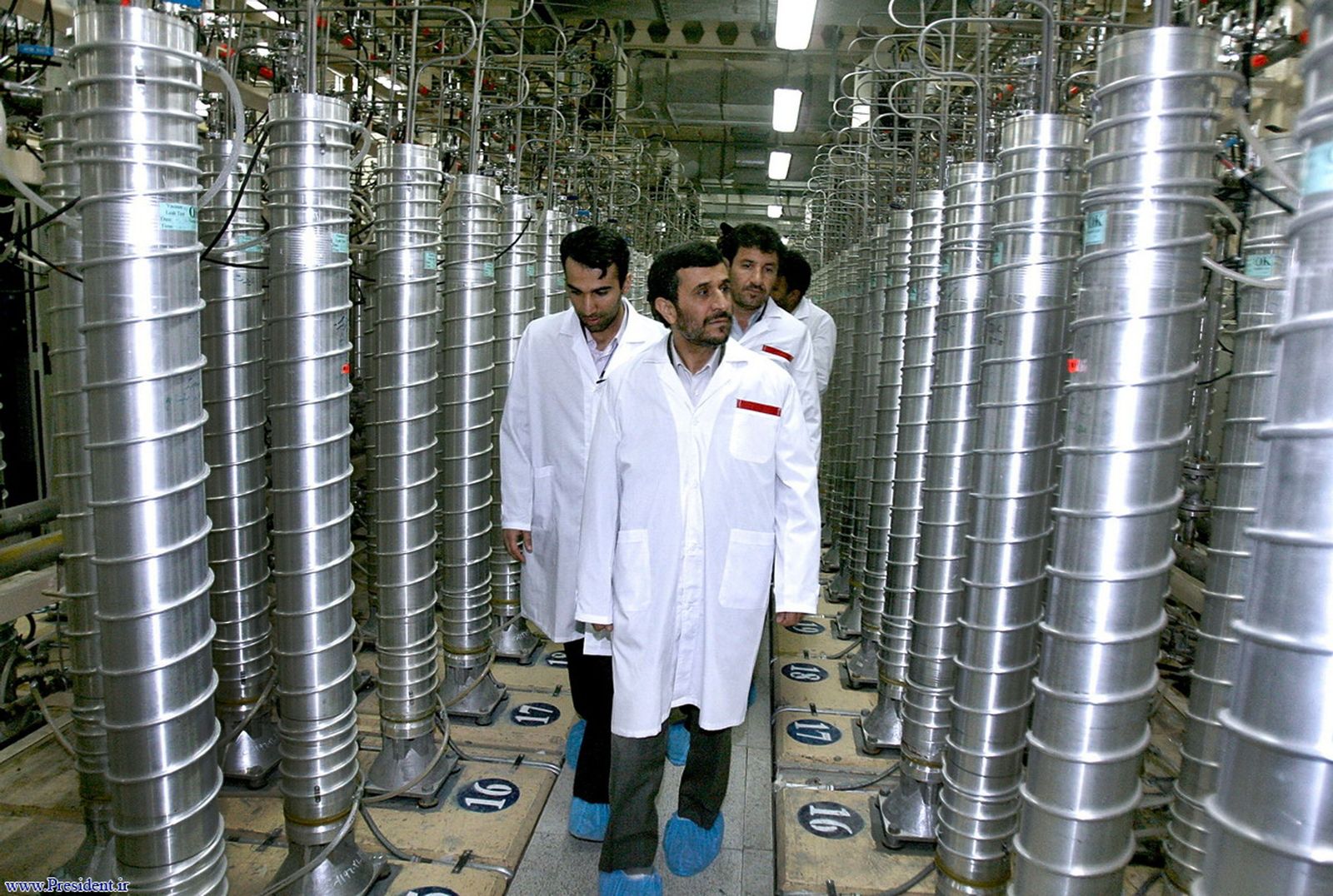 Iran is just one of many countries seeking to develop a nuclear weapon. After all, it's the only way to get your neighbors to treat you with respect.