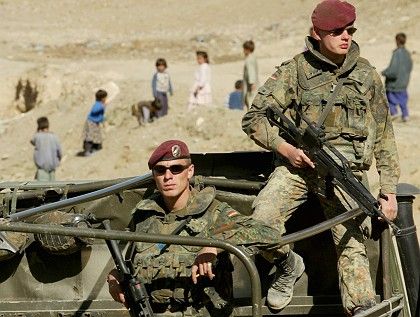 Germany may have managed to avoid the most dangerous fighting in Afghanistan so far, but with NATO asking it to send in combat troops and Canada threatening to withdraw if more allies don't come south, that may not be for long.

NATO has officially requested that Germany send combat troops to Afghanistan, a German Defense Ministry spokesman confirmed Tuesday. The request had been expected for some weeks and the German government had already indicated that it is ready to send the combat troops.

NATO is asking for up to 250 German soldiers to take over from the Norwegian Quick Reaction Force, which is stationed in the north of Afghanistan and is due to end its mission at the beginning of the summer. The Norwegian force has been responsible for providing security to the NATO-led International Security Assistance Force in the north.

The German government is expected to make its final decision at the beginning of February, and already insists that such a deployment is covered by the current mandate for Afghanistan. It says that the deployment would not differ fundamentally from the tasks currently carried out by the 3,500 German soldiers in relatively peaceful northern Afghanistan. However, there have been concerns in Germany that this could mark a significant change in the role of the Bundeswehr, or German military, from the reconstruction and training tasks it has carried out up to now.

German Defense Minister Franz Josef Jung, paying a surprise visit to Afghanistan on Tuesday, said a final decision had not been made. He held talks with Afghan President Hamid Karzai and Defense Minister Gen. Abdul Rahim Wardak and met with the ISAF commander Dan McNeill, who said that a German mission in the north of the country would be an important contribution.

While in Kabul, Jung criticized comments by Bernhard Gertz, head of the German army federation -- a kind of trade union for the armed forces -- who warned that the new deployment would be of a completely different quality. "I hope it doesnt happen, but we have to be prepared to see comrades coming back in wooden boxes after this type of fighting," Gertz told the newspaper BZ am Sonntag on Sunday. Jung rejected this kind of talk, saying there had always been risks involved in the deployment in Afghanistan, but that it was an important contribution to peace and stability.

Germany has come in for criticism from some of its NATO allies for not sending its troops to the dangerous south of the country where NATO troops are fighting a resurgent Taliban. Canada, in particular, has voiced its frustration that only a few countries are carrying the burden there, particularly Canada, the United States and the United Kingdom.

On Monday, Canadian Prime Minister Stephen Harper said that the country will only extend its mission in Afghanistan if another NATO country puts more soldiers in the south. Harper is under pressure to withdraw the troops after the deaths of 78 Canadian soldiers and one diplomat. "NATO's reputation is on the line here," he said, adding that the alliance's efforts were not adequate, "particularly in Kandahar province."