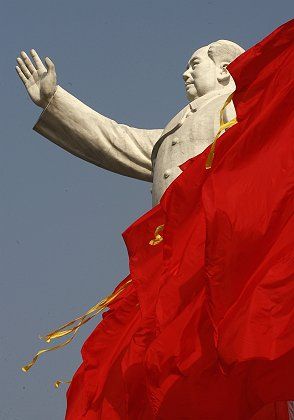 A statue of Mao Zedong. The victims of the Cultural Revolution are rarely remembered in China. Now a new film honoring the first person to be killed by the Red Guards has been banned.

"What is your name?" the Great Helmsman asked a young student as she pinned a Red Guard armband on him in front of the Gate of Heavenly Peace. "Song Binbin," she responded enthusiastically. The name her parents chose meant "properly raised" and "polite," qualities that Mao Zedong found unappealing. "Be violent!" he ordered the girl. A short time later she changed her first name to Yaowu, or "Be Violent."

It was Aug. 18, 1966 and the 72-year-old Chinese leader had called male and female students to assemble on Beijing's Square of Heavenly Peace to launch his Great Proletarian Cultural Revolution. Hundreds of thousands waved Mao's little red book and cheered the old man.

Mao's call to violence fell on willing ears among many young people. Thirteen days earlier Song, 19 at the time, was presumably present when the female students at her school, which was part of the Beijing Teachers University, killed their teacher, Bian Zhongyun. The girls brutally beat the 50-year-old woman to death using wooden sticks spiked with nails. On the day before the killing, members of the Red Guard had already maltreated the teacher, who was the party leader at the school -- they suddenly viewed her as a "counter-revolutionary revisionist" who they believed had gambled away her life.

Bian went down in history as the first victim of the Cultural Revolution -- the bloody mass movement Mao used to eliminate his enemies within the party. The teacher's murder was followed by the killings of millions of Chinese people. The ten-year campaign destroyed entire families, irreplaceable cultural treasures and centuries-old traditions. In August 1966 alone, about 100 teachers were murdered by their own students in the western section of Beijing.

'She Believed that She Was Innocent'

Independent filmmaker Hu Jie has now traced the grim events at Bian's school in great detail in a new documentary entitled: "Though I Am Gone."

One of the main characters in Hu's film is the murdered woman's husband, 85-year-old Wang Qingyao. "She sacrificed herself as if she were refusing to lose her dignity," the old man explains. Shortly before his wife died, says Wang, he tried to convince her to flee, but she refused. "She believed that she was innocent," says Wang.

Most Chinese people will never get to see Hu's historical work. The Chinese Communist Party has continued to keep silent about this chapter of its history. In 2006, the 40th anniversary of the beginning of the Cultural Revolution, it instructed academics, artists and journalists to simply ignore the topic.

This was probably the reason the authorities recently cancelled the Multiculture Visual Festival in the southern province of Yunnan, an event where director Hu had planned to screen his documentary. Despite the cancellation, the film is available on YouTube, where it is cut into 10 segments -- although late last week the film was banned in China. Hu, a military painter by trade, is used to these kinds of difficulties. When he filmed an earlier documentary about another Mao victim ("In Search of the Soul of Lin Zhao"), he lost his job with Xinhua, the official Chinese news agency.

But what is a people without memory? Hu asks. "If politicians deny their own history, we simple Chinese should remember. We must continue to make many films about the Cultural Revolution and its massacres."

One of the reasons the Communist Party reacted with such sensitivity to his most recent work is that many of the former members of the Red Guard who attended Bian's middle school were members of the families of high-ranking officials who are still revered today. "Some were daughters, nieces or granddaughters of members of the Politburo," says Wang, the widower featured in the film. "It was essentially a royal school." Yaowu, for example, was the daughter of a senior Communist Party official. The students also included Deng Rong, daughter of the later Communist Party patriarch and economic reformer Deng Xiaoping, as well as Liu Tingting, a daughter of former President Liu Shaoqi.

The families of most members of the Red Guard later became victims of the Cultural Revolution themselves. Radical comrades drove Deng out of office, and his song Pufang was forced to jump from a window and has been paraplegic ever since. Liu died a miserable death in prison in 1969.

Their daughters, former Red Guard members Deng and Liu, are businesswomen today, while Song Binbin, a.k.a. Yaowu, now works as an environmental researcher in Boston. In a US documentary about the Cultural Revolution, she denied any involvement in the murder of her teacher. "I was always opposed to violence," she said, adding that the People's Daily, the Communist Party paper, had forced the name Yaowu upon her.

The Cultural Revolution has never been dealt with officially, nor has there been any debate over culpability and collaboration. With the exception of the "Gang of Four," which included Mao's widow, Jiang Qing, no high-ranking politicians were ever put on trial.

Bian's husband has never quite got over his wife's murder. He has even saved her bloody clothing and shows them in the film, but he is likely to be left alone with his memories. The authorities have turned down his request to have a memorial plaque installed in the schoolyard.