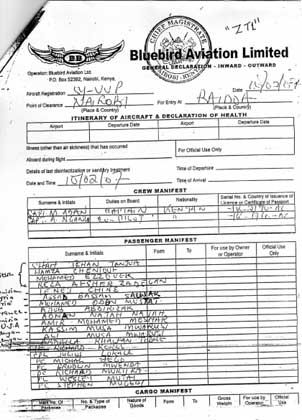 Passenger lists showing transfers from Kenya to Somalia, according to the human rights group Reprieve.

When Swedish citizen Saafia Benaouda, 17 years old and pregnant, left on a multi-stop trip through the Persian Gulf region with her husband, 25-year-old Mounir Awad, in December, they were looking forward to an exciting Christmas vacation. It didn't take long, however, for their adventure holiday to deteriorate into a nightmare. Following a stop in Dubai, the couple decided to make an ill-advised detour into Somalia -- for a quick holiday stop in a country torn by civil war. At the time of their trip, fundamentalist Muslim militias and groups allied with the unstable transitional government were involved in heavy fighting.

"I love to travel and wanted to get to know another Muslim country," Saafia Benaouda says in justification of her unusual itinerary. A substantial degree of naiveté seems to also have played a role: Benaouda reports she had not read the newspaper for "two or three weeks" while in Dubai and had not checked other media either. She says she knew nothing about the unstable situation in Somalia and the official warnings not to travel there.

She wasn't impressed with the country anyway: "Somalia wasn't at all what I expected. I didn't like it there," says the daughter of a Moroccan, whose mother converted to Islam and directs a Muslim organization in Sweden. "I think Somalis don't like white people." But that wasn't the worst thing that happened to her on her trip to Somalia.

When Ethiopian troops entered Somalia around New Year's Day, she fled towards the Kenyan border with her husband. That's where it happened: "I heard shooting everywhere. There were three US soldiers with the US flag on their uniform, and 10 Kenyans," the 17-year-old remembers. The men were apparently part of the Kenyan Anti-Terrorism Police, which is heavily financed by the United States and is part of the US-sponsored, $100 million East Africa Counter-Terrorism Initiative.

On Jan. 27, 2007, Saafia was flown to Mogadishu in Somalia on an African Express Airlines flight (flight number AXK527), along with 84 other "terror suspects," including several children.

US citizens were present at each of these stops, Saafia's husband Mounir Awad told SPIEGEL. "When we landed, we were immediately photographed by Americans in civilian clothing," he says, adding that he and the others were repeatedly insulted as "Qaida bastards."

Talking to "Tim" and "Dennis"

In early February, the guards then took them to the Ethiopian capital of Addis Ababa. Every morning at 5:00 a.m., all terror suspects were picked up by a truck and driven to an American villa, according to Mounir Awad. There they were interrogated for 12 hours at a time and longer. One interrogator called himself "Tim" and claimed to work for the FBI; another called himself "Dennis" and worked for the CIA.

The US citizens took DNA samples and asked about Swedish Muslims and mosques, Awad says, adding that they sometimes beat or choked their prisoners. Only those willing to cooperate were allowed to sit down and given something to eat, according to Awad. Meanwhile, back home in Sweden, his friends and relatives were interrogated by the Swedish intelligence service, which also wanted to know whether or not he was a member of al-Qaida. 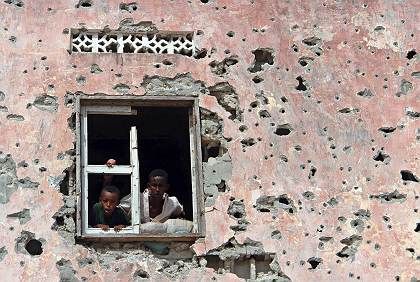 The US is concerned about the risk of terror from a chaotic Somalia.

The story of the two Swedes is no isolated case: During the confusion wrought by the Ethiopian entry into Somalia, Kenyan troops -- aided by US authorities -- detained more than 100 people in the area around the border between Somalia and Kenya, including four British citizens, one Canadian and one 24-year-old US citizen. The vague accusation levied against those detained is that they are supporters of al-Qaida.

200 US Agents in Addis Ababa

According to Saafia Benaouda, there were many children among the detainees, including one seven-month-old infant. One woman in advanced pregnancy is even said to have given birth to a child while detained in Ethiopia. The CIA and the FBI currently have as many as 200 agents in Addis Ababa, according to Washington. The British human rights organization Reprieve wrote in its most recent report of "Guantanamo-style" prisons on the Horn of Africa.

The interrogations, carried out without Red Cross knowledge, without lawyers and without judges, herald a new phase in the US government's "war on terror." Ethiopia is the Americans' closest regional ally in the fight against terrorism, and the Bush administration has been careful to reward the country. It has recently been equipped by Washington with modern weaponry to fight Somalia's fundamentalist Muslims.

The existence of secret prisons was long considered unproven -- until US President George W. Bush admitted last autumn that the CIA had taken "potential mass murderers" prisoner "on the battlefields around the world" and detained them in secret locations, where the suspects were interrogated using procedures he described as both "tough" and "safe and lawful and necessary."

What those procedures look like has now also become known: They include techniques ranging from sleep deprivation to oxygen deprivation, from heat shocks to a form of torture called "waterboarding," which involves simulating the feeling of drowning. About 100 prisoners have been detained in such camps, John Bellinger, the Legal Adviser to the State Department, admitted last fall. He added that the last of them had, however, been transferred to Guantánamo in October, and that the camps have been vacant since.

At the end of last week, Council of Europe special investigator Dick Marty revealed where these secret prisons are located: in Romania and Poland, where about a dozen high-ranking al-Qaida suspects were detained.

The accusations Marty makes in his 72-page report are serious ones. The CIA, he writes, carried out a "whole series of illegal acts," from kidnapping and detention to "interrogation techniques tantamount to torture," according to the report.

Marty bases his claims on anonymous sources from within various government bodies, the intelligence agencies and on an analysis of data on the movements of CIA planes. The investigator found out in conversations conducted on location that the existence of prisons in Poland and Romania was treated as a state secret: In Bucharest, apparently, not even the prime minister knew that the CIA was maintaining a miniature prison at the hangar of the Mihail Kogalniceanu airport on Romania's Black Sea coast.

According to Marty, the government had signed a special agreement with the United States that guaranteed the CIA unrestricted rights in Romania. Meanwhile, the Romanian government has rejected the accusations out of hand.

The evidence the special investigator collected in Poland is just as incriminating. A CIA Gulfstream jet landed at Szymany airport in the north of the country on March 7, 2003 at 4:00 p.m. Three people stepped out of the plane -- and one of them seems to have been Khaled Sheikh Mohammed, one of the masterminds behind the Sept. 11, 2001 terrorist attacks. His interrogations took place in an intelligence agency complex called Stary Kirkuty, 12 miles away from Szymany, according to Marty. Ramzi Binalshibh, the contact man of the death pilots associated with Mohammed Atta, is likewise said to have been detained there.

Marty criticized the Polish government's lack of cooperation with his investigation. In more than 18 months, it was not able to make data on the CIA flights over Poland available to him, he says.

The former lawyer is also tough on the United States. The fact that US citizens were not affected by such prisoner transfers at any time is described by him as a kind of "legal apartheid." The US strategy of never flying prisoners over US territory reveals the "fundamental contempt" of the United States with regard to legal norms in Europe, in Marty's view. The investigator believes that "such actions would no doubt have been ruled unlawful and unconstitutional" in the United States.

Marty also argues that it is "unacceptable" that Berlin has still not clarified the nature and extent of the CIA's activities, adding that the German government only provided the parliamentary committee looking into the issue with incomplete information on US activities in the war on terror.

The Bush administration seems to be taking international criticism of the secret renditions program seriously. And the US government officials have admitted to questioning detainees in Ethiopia, according to the Associated Press. But -- and the point is important to the US administration -- the detainees were not held by US authorities themselves, but by the Ethiopian government. And the FBI, which is subject to judicial control, participated in the interrogations along with the CIA, according to the US administration.

But the damage wrought by the secret prisons, renditions and torture-like interrogations is still tremendous. Colin Powell's former Chief of Staff Lawrence Wilkerson told British broadcaster Channel 4 that the US administration had arrested an estimated 30,000 to 50,000 suspects over the past year. Eighty-five percent of them were innocent, according to Wilkerson. "We really have created a mess here. A terrible mess," Wilkerson said. "This has been incredibly damaging."