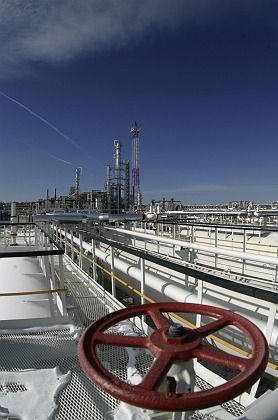 The din of percussion drills and circular saws echoes through the streets. The small city of Khanty-Mansiysk has become the site of a nonstop building frenzy. New hotels, enormous shopping centers, a new airport and a convention center have sprung up in no time. Traditional Siberian wooden huts have been razed to make way for modern single-family homes. The city's downtown sparkles with freshly installed parks lined with flowerbeds. Children are suddenly waking up to find new playgrounds full of brightly colored swings, seesaws and slides.

It is hard to believe that this stylish little city even exists, seemingly in the middle of nowhere. Khanty-Mansiysk is the capital of the Siberian region of the same name, a hilly taiga landscape bordering the Ob River and about the size of France. The average annual temperature is -20 degrees Celsius (-4 degrees Fahrenheit). And yet people seem to be living well here.

Alexander Filipenko, the governor, recites the statistics that describe the city's success. A city of 70,000 people, Khanty-Mansiysk has the fourth-highest birth rate in Russia, a sensation in a country where the number of births has dropped by half since the early 1990s. Life expectancy in Khanty-Mansiysk is 72, which is well above the Russian average of 66 years. Even the average income of city residents is approaching Moscow levels. "And we except it to increase by 17 percent this year," the governor promises, his eyes shining. "Development in our region is unparalleled worldwide," he says enthusiastically.

It is no coincidence that this year's EU-Russia summit, which kicks off on Thursday, is being held well beyond the Ural Mountains, in a city that is almost a three-hour flight from Moscow. The choice of Khanty-Mansiysk, made by former President and current Prime Minister Vladimir Putin, was symbolic. In Siberia, Russia wants to make it clear to Europeans that the portion of the giant country that lies within Asia should in fact be treated as part of Europe. Khanty-Mansiysk is a successful backdrop for Russia to display its new self-confidence to the West. Its glittering façades are perfectly suited to show the West that Russia is doing well economically and is a force to be reckoned with once again.

Showing Off the Blessings of Oil

The sudden rise of this small Siberian city is no accident. The source of its prosperity bubbles up through the muddy soil of the taiga not far from the city limits. The region is home to 70 percent of Russia's developed oil fields. Last year, 278.5 million tons of oil left the region, bound for Europe via pipelines, ships or rail. In Khanty-Mansiysk Russia, now a major energy power, is making a show of its oil riches -- a resource that Russia, in recent years, has increasingly used as a political tool to assert its claim to global power. 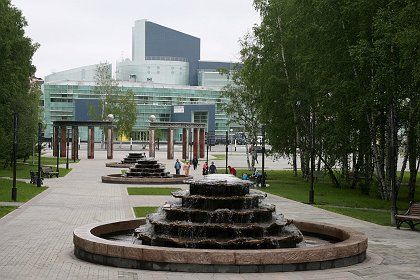 Downtown Khanty-Mansiysk. The city plays host to the Russia-EU summit that starts Thursday.

In Khanty-Mansiysk, the blessings of oil will be abundantly clear to European guests of state and journalists. The ostentatious headquarters of the country's oil giants, Rosneft, Lukoil, Surgutneftegas and Gazprom-Neft, are lined up along the city's main thoroughfare. The companies derive the lion's share of their revenues from oil produced in the region. They also pay annual taxes amounting to about $40 billion (€26 billion), of which $4.5 billion (€2.9 billion) remains in Khanty-Mansiysk. The rest goes to Moscow.

The realm of Gazprom-Neft, of which Gazprom owns 72 percent, begins on the right-hand side of a highway about 100 kilometers (62 miles) from the city's outskirts. Roman Abramovich, an oligarch with close ties to the Kremlin, sold Sibneft, a former oil company, to the natural gas monopoly in late 2005. Enormous drilling towers now protrude from the birch forests, while gas flares blaze over the treetops. Roads made of sand and concrete panels crisscross the muddy taiga. It takes 300 trucks a day to provide a single oil field with the necessary technology and equipment. Thousands of kilometers of pipelines follow the roads, cutting through the swampy landscape like silver snakes. At each oilfield, 600 workers live in settlements consisting of blue-and-white containers. Pumping stations and transformers are set up at regular intervals along the roads.

Gazprom-Neft is currently pumping eight million tons of crude oil from 600 wells, each about 2,500 meters (8,200 feet) deep, and it even has plans to expand production. The company expects to drill another 600 wells within the next six years. "But we will have reached our peak production level, 20 million tons a year, by 2014," predicts Igor Suyevsky, the head of the company's production division. By then, Gazprom-Neft will have to have found new oil fields, or production will decline.

Making It Difficult to Business in Russia

In April Leonid Fedun, vice-president of the major Russian oil company Lukoil, warned that oil production has already reached its peak in Russia. In fact, production declined by 1 percent in the first quarter of 2008 -- the first time this decade that Russia is producing less oil than before. The news came as a shock to Europeans, because Europe derives one-third of its oil from Russia. It is doubtful whether the world's second-largest oil producer can continue to satisfy growing demand on the world market.

According to the Russian energy ministry, Russian oil exports declined to 248.4 million tons in 2006, down from 253.6 million tons in the previous year. Although that figure increased again last year to 252 million tons, cautious prognoses suggest that export volume will grow by only two million tons by 2010. This is attributed to higher domestic demand, and to the fact that Russian oil production has stagnated since 2005.

In recent years, Russian oil companies used the high price of oil on the world market to achieve profits. The government-owned companies, in particular, like Rosneft and Lukoil, invested "very little or nothing at all," says Chris Weafer, a financial analyst with Uralsib, a Russian financial corporation. According to a current study by the French oil company Total, it would require an investment of $9 billion (€5.8 billion) a year to keep Russian production at its 2007 level. This is $7 billion (€4.5 billion) more than the country currently spends to develop new resources. 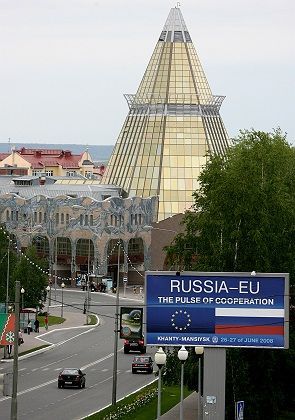 The logical next step would be to bring in international corporations. But Moscow has in fact made it difficult for them to do business in Russia for years. A new law bars foreign companies from gaining access to oil or natural gas fields unless the Russian share of the applicable company is at least 51 percent. The British-Russian joint venture TNK-BP is currently in jeopardy. There are rumors in Moscow that Gazprom intends to take over TNK-BP, Russia's third-largest oil corporation.

All it takes is a look at the oilfields of Khanty-Mansiysk to realize that even Gazprom cannot make headway in oil production without foreign assistance. Almost two-thirds of the trucks carrying equipment to Gazprom-Neft's oil platforms belong to Schlumberger, a multi-national petroleum exploration firm. The American oil technology company Halliburton is also cooperating with the Gazprom subsidiary. "When it comes to new oil production technologies," says the head of the production division, Suyevsky, "we cannot keep up with Schlumberger and Halliburton. We need international investment. Who is supposed to pay for all of this?" he asks, sighing. Compared with the Saudi Arabian desert, exploration in the permafrost soil of the taiga is an expensive undertaking.

The risks of the Russian oil miracle are also becoming apparent in the Khanty-Mansiysk district, where 90 percent of economic production is directly dependent on the oil industry. Ninety percent of residents are considered "Neftyaniks," or people whose professions are tied to the energy sector. Even the innovative economic sectors are thriving purely as a result of the oil boom. For instance, the largest high-performance computer east of the Urals devotes its entire computing power of 130 billion operations per second to oil production. Russian oil giant Lukoil is currently using the large black computer to analyze seismic data. Even the local art gallery only exists because of oil. Its sleek walls are adorned with classic Russian paintings -- in oil, naturally -- purchased from the Tretyakov Gallery in Moscow or the Hermitage Museum in St. Petersburg. Small plaques next to each painting identify the sponsors: Rossneft, Lukoil, Surgutneftegas and the like.

Governor Filipenko admits to foreign journalists: "We must diversify the economy, because the oil is running short." His plans are ambitious. He hopes to turn the region into a tourist attraction, attract IT companies and develop the logging industry. "In 50 years," he predicts, "more than half of the gross domestic product will no longer be coming from the oil industry, but from other areas." Filipenko hopes that the EU-Russia summit will draw the attention of some international investors to the region.