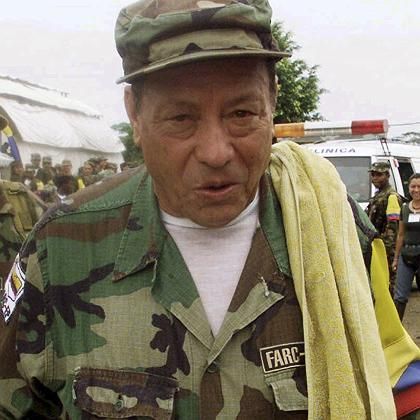 FARC has confirmed that Manuel "Sureshot" Marulanda Velez is dead.

He already had a photo of himself posing with Vietnamese general and revolutionary hero Vo Nguyen Giap, and he also planned to suggest to Cuban leader Fidel Castro that he don his combat uniform once again for a joint photo, "Angel" told FARC commander Ivan Marquez. All that was missing in his collection, he said, was a photo with "J.E."

"Angel" was FARC's code name for Venezuelan President Hugo Chavez, and "J.E." was Manuel Marulanda, a.k.a. "Tirofijo" ("Sure Shot"), the legendary leader of Latin America's oldest guerilla organization. But the meeting Chavez apparently longed for will never take place.

Marulanda is dead, FARC commander "Timochenko" confirmed on the weekend before last. FARC claims that he died of a heart attack, but the Colombian government believes that the guerilla leader was killed in a military attack. It has offered a reward for the body.

The death of its leader is the most recent in a string of serious blows to FARC. In early March, the Colombian military killed Raul Reyes, the group's second-in-command, in an air attack. A few days later, Ivan Rios, a commander, was killed by a bodyguard hoping to collect a bounty that had been offered for the guerilla leader. Finally, two weeks ago, "Karina," one of the most brutal and respected of FARC's female guerillas, turned herself in to authorities. She is believed to be responsible for the murder of the father of Colombian President Alvaro Uribe. This series of setbacks has fueled speculation that the entire guerilla organization is on the verge of surrendering.

The rebels are now more dependent than ever on their guardian angel, Hugo Chavez. But Chavez is maintaining a low profile. After Reyes's death, he urged the Venezuelan congress to observe a minute of silence, and he even sent troops to the Colombian border in an attempt to intimidate Venezuela's neighbor. But he offered no comment, at least initially, on Marulanda's death. At the Latin America-European Union summit in Peru two weeks ago, "Angel" sought to portray himself as a man of peace.

With his back to the wall, Chavez is trying to ingratiate himself with his counterparts once again. Hundreds of e-mails on Reyes's laptops, many of which SPIEGEL has obtained, expose him as an accomplice of the narco-terrorist guerilla organization. Washington has already expressed its "concern" over Chavez's alliance with the rebel group, which is listed as a terrorist organization in both the United States and the European Union. Democratic presidential candidate Barack Obama has also demanded that Venezuela be called to account for its support of FARC. 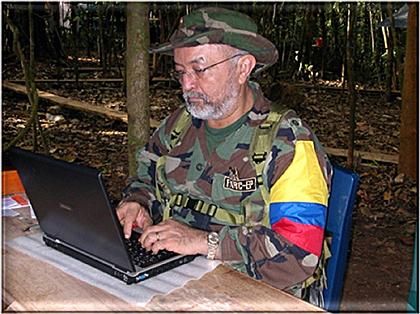 In early March, the Colombian military killed Raul Reyes, the group's second-in-command, in an air attack.

New details from Reyes's computers are constantly emerging, with less than half of the information evaluated to date. One thing is clear, and that is that the bearded commander was the guerilla group's gatekeeper. "All contacts with Marulanda went through Reyes," says one Colombian security expert.

The guerilla leader directed drug and weapons deals from his camp in Ecuador. He negotiated directly with an associate of the notorious drug lord Juan Carlos Ramírez Abadía, a.k.a. "Chupeta" (Sucker), who was arrested in Sao Paulo, Brazil in August 2007. According to an e-mail Reyes wrote to his leadership last August, Chupeta pockets $15,000 (€9,680) per kilo of cocaine smuggled to Europe, where the market price is $30,000 (€19,360) per kilo. "If FARC decides to get into the business," the e-mail continued, "it can supply as much as it wants: five, 10, 50, 100 or more." Reyes was referring to kilos.

Experts estimate that at least one-third of all cocaine from Colombia is smuggled to Europe and the United States through Venezuela, with the authorities apparently turning a blind eye to the activities. According to government sources in Bogota, Colombian soldiers at a military base on the border observe dozens of planes carrying drug transports in neighboring Venezuela on a daily basis.

In addition, Chavez apparently provided thousands of Colombians, including many of the guerillas, with Venezuelan papers. Intelligence agencies fear that senior members of FARC have also traveled to Germany using Venezuelan passports -- tourists from Chavez's Venezuela are given more lax treatment when entering the country than Colombians.

Chavez also apparently helped the FARC rebels obtain weapons by putting them in touch with two Australian arms dealers. His intelligence agents promised FARC that they would get them parts to build surface-to-air missiles. In an e-mail to Reyes on March 1, 2007, FARC commander Timochenko wrote that the Venezuelans would "guarantee travel for one of our men to the Middle East, so that he can take a course in the use of the missiles." The purchase of complete weapons systems, Timochenko wrote, is "very complicated, because of the existing inspections." 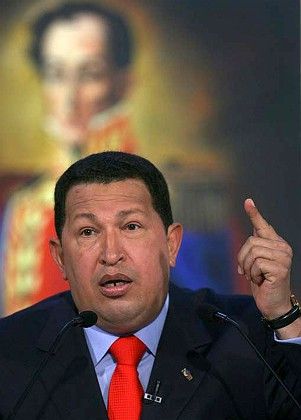 Reyes apparently felt completely safe in Ecuador. Most of the correspondence is unencrypted, although a few messages were encrypted by a "Comrade Tanya" in Caracas. It would not be unreasonable to assume that her office was not far from the Miraflores Palace, which houses the office of the Venezuelan president. FARC commander Ivan Marquez, who Colombian intelligence officials believe is living in Venezuela, was apparently a frequent visitor to Chavez's office. Indeed, Venezuela has apparently played a key role in the guerilla group's "strategic plan." The ambitious Chavez, the self-proclaimed leader of a "Bolivarian Revolution" named after the Latin American freedom fighter Simon Bolivar, is secretly arming Venezuela for a so-called asymmetric war against the United States -- a strategy that closely resembles the guerilla war FARC has been waging for decades.

Chavez assigned the task of managing communications with FARC to Interior Minister Ramón Rodríguez Chacín and General Hugo Carvajal, the head of Venezuelan military intelligence. Rodríguez Chacín, who owns a hacienda on the Colombian border, was a frequent guest at the FARC camps in Venezuela.

The interior minister -- described by FARC as "a real badass" -- was apparently so impressed by the guerillas that he asked them for assistance in training Venezuelan militias. "Rodríguez Chacín asked about possible ways in which we could share our knowledge of guerilla war," Marquez wrote on Nov. 14, 2007 in an e-mail to Reyes. According to the message, the Venezuelans were seeking information about "modes of operation, explosives, camps in the jungle, preparing ambushes, logistics and mobility  Everything that would be required to react appropriately to a US invasion."

Chavez admired FARC founder Marulanda and was "downright obsessed" with his strategic skills, says a Colombian intelligence agent. The Venezuelan leader allegedly offered his idol a financial injection of $300 million (€194 million) -- the amount Marulanda had estimated it would cost his group to seize control of the government in Bogota.

The guerilla leader, who was short of cash as a result of the Colombian government's intensified anti-drug campaign, was urgently in need of the money. But the e-mails do not clearly indicate whether the payment was in fact made. Chavez denies that it was. Nevertheless, Marulanda, Reyes and the FARC commanders exchanged dozens of messages in which they referred to the "dossier" or the "300," their code name for the money.

According to a message that was sent to FARC, Interior Minister Rodríguez Chacín had prepared an initial payment of $50 million (€32 million). "A bird in the hand is worth two in the bush," the old fox Marulanda remarked. He also mentions the subject in his last email, dated Nov. 20, 2007: "We must clarify whether this is a loan or a donation out of solidarity  It creates the impression that Chavez is interested in contributing to the FARC cause in order to boost his geopolitical project in a number of countries."

This reasoning prompted Marulanda to issue a clear order to the FARC commanders. They were to maintain "good neighborly relations" with Venezuela.