Arkhangelsk is an inhospitable port city on the White Sea, in Russia's far north, not far from the Arctic Circle. With its crumbling wooden buildings and dilapidated Soviet-era apartment blocks, its best days are clearly behind it. Although its name mean "city of archangels" in Russian, it's not exactly the kind of place that inspires hope.

Most of the people who live here are somehow connected to the sea. That includes Yelena Sarezkaya, 51, a petite blonde with two daughters. Her husband, Sergei Sarezky, is a sailor, and he hasn't been home in quite a while. Sarezky is the captain of the Arctic Sea, the freighter that was hijacked in the Baltic Sea more than 12 weeks ago.

Yelena is at her wits' end -- particularly after having received a bizarre letter from the Investigative Committee of the Prosecutor General's Office in Moscow. The letter, dated Sept. 10, states that her husband and his fellow seamen have been permitted to return home "at the expense of the federal budget."

The only problem is that Sarezky and three other crewmembers have yet to return home.

Still, Yelena takes some consolation from the fact that she can communicate with her husband via text message. "They're not saying what they plan to do with us," Sarezky texted his wife from somewhere in the Mediterranean Sea.

Meanwhile, the tale of confusion and intrigue surrounding the Arctic Sea goes on. It's still not clear whether the drama surrounding the Russian-owned freighter, which is based in Helsinki and was supposedly shipping a load of lumber, is a crooked trick pulled off by a competing shipping company or a case of smuggling with global implications.

On Aug. 16, the Russian naval frigate Ladny, armed with large cannons and anti-aircraft missiles, liberated the Arctic Sea from pirate control. The men who had hijacked the ship -- and most of its crew -- were flown to Moscow. The alleged hijackers are now in jail. They insist that they are merely environmentalists who were rescued by the Arctic Sea when their own vessel got into distress.

In mid-September, an official in Las Palmas, the capital of Spain's Canary Islands, announced that its on-board investigation was complete and that the ship's cargo was, in fact, lumber. According to the Russian authorities, nothing had been found that could "incriminate the Russian Federation."

In the runup to the investigation, a rumor had been circulating that the Mossad, Israel's foreign intelligence service, had stopped a shipment of S-300 surface-to-air missiles to Iran on board the Arctic Sea. The story seemed to make sense, particularly given the fact that, in addition to the Ladny, Russia had sent two large Ilyushin-76 military transport planes on the 7,000-kilometer (4,375-mile) journey to the Cape Verde Islands in the Atlantic, where the hijacked freighter was anchored at the time. The fact that two enormous planes were sent -- when a single small passenger aircraft would have sufficed to ferry the 19 men made of up pirates and most of the crew to Russia -- puzzled many.

Alexander Kraznozhtan, a 50-year-old man with a dark, full beard, is doing his best to secure the return of the four remaining crewmembers. The chairman of the local seamen's union is sitting in a smoke-filled office off Arkhangelsk's central market square. "The men survived the attack by pirates," he says. "Let's hope they also survive their rescue by the Russian authorities."

Kraznozhtan has written half a dozen petitions, including one to Russia President Dmitry Medvedev. "We can say with certainty that four seamen are being forced to wait it out against their will on the Arctic Sea," he says. "That satisfies the legal definition of enslavement."

The other crewmembers haven't fared much better. Sergei Petruk, the ship's machinist, recently paid a visit to Kraznozhtan. He is one of the 11 crewmembers who have now returned home -- though only after a stopover in Lefortovo Prison, the infamous Soviet-era KGB prison in Moscow. Petruk is sitting with his wife, Oxana, in a café across the street from the municipal swimming pool in Arkhangelsk. His right hand is swollen. "The terrorists broke my hand with a rifle butt," he explains.

Petruk would never have thought it possible that his crew could run into pirates in the Baltic Sea. "They were wearing black masks and jackets with 'polis' -- the Swedish word for police -- written on them," he recalls. "But I quickly realized that they weren't real police officers." The weapons the men were carrying were too shabby and worn to be used by the coast guard of a Western country, Petruk reasoned -- and they were Kalashnikovs.

Besides, Petruk adds, the kidnappers spoke Russian when they contacted their accomplices in Moscow via radio. The hijackers were apparently on the lookout for a ship that was supposed to pick them up. But it never showed up.

A mysterious web of companies is associated with the Arctic Sea. Only 500 meters from the office of the seamen's union, a company called Solchart Arkhangelsk Ltd. has leased three rooms. It was from here that it hired the freighter's crew.

The owner of the shipping company is Viktor Matveyev, a Russian, and its parent company, Solchart Management AB, has its headquarters in Helsinki. The freighter itself is owned by Arctic Sea Ltd., which is registered in the Maltese capital Valletta. That city is home to a number of companies of questionable repute, such as Better Win 24 Ltd., which attracted attention in Germany with its spamming calls touting hugely profitable lotteries.

The seamen's union was suspicious of Solchart's claim that it had "only been actively engaged as a shipping company for a short time." However, Arctic Sea Ltd. has been conducting transactions in Malta since 2005, such as selling shares to Panama. To make things even more confusing, Aquaship, a company based in the Latvian capital Riga, was still considered the owner of the Arctic Sea until late 2008, when Solchart acquired the freighter and four sister ships. Likewise, Aquaship listed these ships on its Web site as part of its own fleet until the end of July.

"In our industry," Kraznozhtan says, "it's not unusual to see ships being operated by front men. The real owners do not identify themselves."

His colleague Alexander Ageyev is an expert on Russia's highly corrupt shipping industry. He sees the jealousy of a competitor behind the hijacking of the Arctic Sea. Of course, he might be right, and the incident could have been resulted from a simple dispute in a semi-criminal milieu. But that wouldn't explain why the Russia's navy was deployed and why investigators have behaved so strangely.

Nor does it explain the ongoing odyssey of the Arctic Sea. At first, the Russian authorities announced that, after the investigation was complete, the ship would sail for the Black Sea port of Novorossiysk. But then there was talk of Las Palmas. And now the freighter is anchored just inside the Mediterranean, 65 miles (104 kilometers) east of Gibraltar.

Algeria, where the ship was originally supposed to be heading with its load of lumber, refuses to allow the Arctic Sea to enter any of its ports. Malta, where the Russians wanted to turn over the ship to Arctic Sea Ltd., also refuses to accept the vessel. As one spokesman for the Russian Foreign Ministry says, all countries have "set up conditions that are unrealistic given the current circumstances."

The Maltese, Spaniards and Algerians had reportedly insisted that the Russians adhere to transfer protocols that would help clarify legal and financial claims.

Matveyev, the ship's owner, has tallied up his losses to date. According to his estimates, the Arctic Sea drama has already cost him €716,486 ($1.07 million).

Meanwhile, in Arkhangelsk, Yelena Sarezkaya is still waiting for the drama to end well. 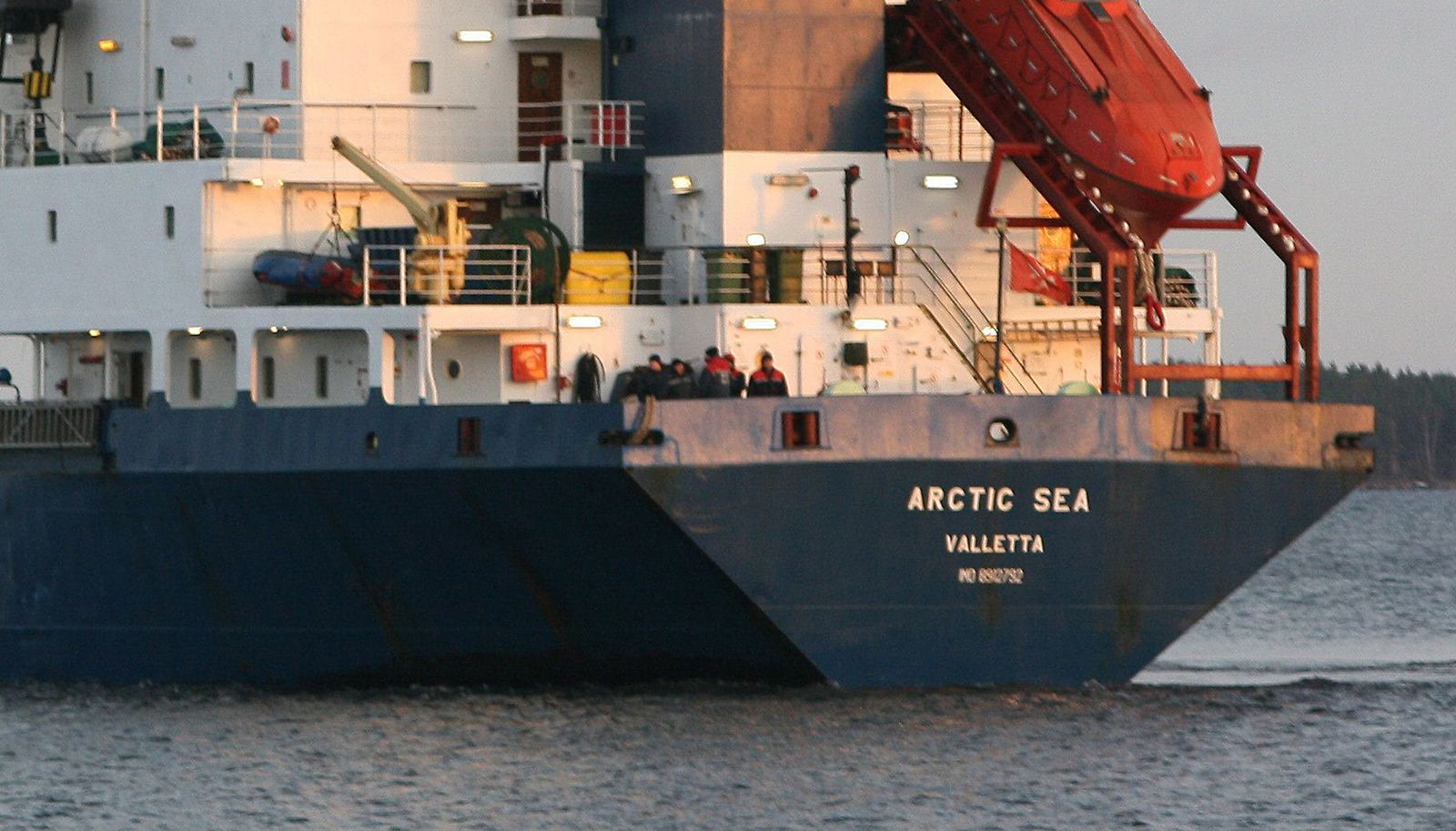 Many questions remain about the past -- and future -- of the 'Arctic Sea.'