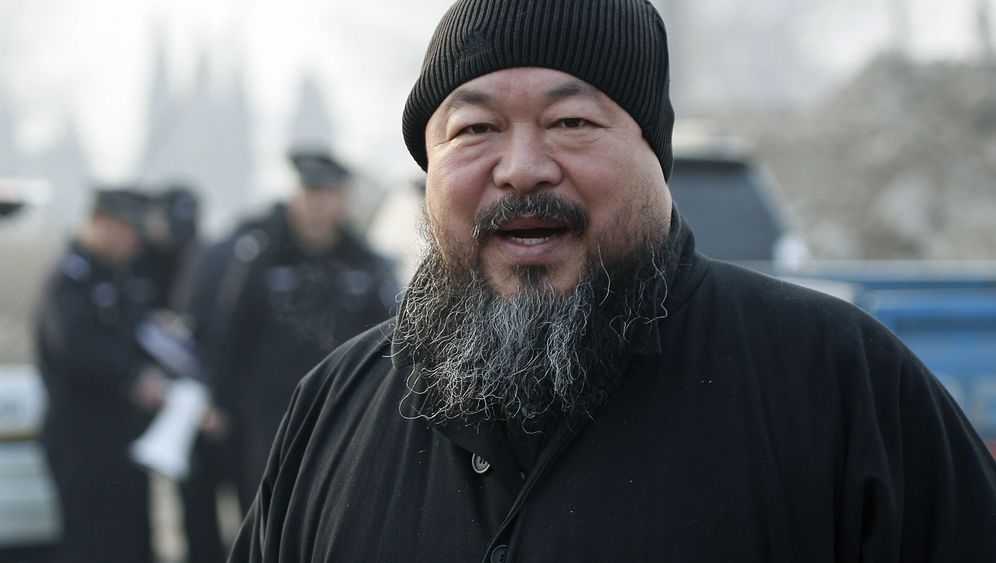 It was a trick that they thought would fool the censors, at least for a while. Rebellious Chinese bloggers, determined to continue writing about the arrest of artist Ai Weiwei even after his name was blocked by Internet watchdogs, started writing "Ai Weilai" instead of the artist's real name on their microblogs and in Internet forums. The term resembles Ai's name, but translates literally to "love the future." One user wrote: "We love the future and we need the future." But the ploy didn't help. The post was removed from the Internet.

With Ai Weiwei's arrest, the Chinese government has clearly demonstrated what the future holds for others who follow the artist's example. Ai was merely the most prominent victim of the regime in recent weeks -- he wasn't the first and he wasn't the last. Yet these heroes in the shadows don't spark diplomatic scandals. Even the majority of Chinese people know little about the courage of these few.

Human rights groups such as the Hong Kong-based Chinese Human Rights Defenders (CHRD) describe this as the authorities' toughest crackdown since 1998. Between mid-February and the end of last week, 30 people were detained, according to CHRD's figures. In addition, around 20 have disappeared, five were arrested and three were sent to labor camps for "reeducation."

The above-mentioned numbers only refer to incidents relating to the crackdown that the Chinese authorities launched following calls for a "Jasmine Revolution" in China. The regime has also acted against religious groups. For example, security forces recently detained more than 100 members of an underground church in a single day.

These are the actions of a government with unbridled power. One day the authorities detain activist Ni Yulan -- who is now confined to a wheelchair as a result of being tortured -- another day they sentence critic Liu Xianbin to 10 years in prison. Then they warn Zhao Lianhai, who fought for an investigation into the 2008 milk powder scandal, that if he doesn't stop speaking out, he's going back to prison. Zhao had dared to describe in a newspaper interview how he had been force-fed through the nose with a milk powder solution. He had also called for Ai Weiwei's release.

The fear has reached such levels that a single piece of news is enough to cause alarm. Late last week, suddenly no one was able to reach lawyer Liu Xiaoyuan. His cell phone was off, and nobody had heard anything from him. Shortly beforehand, Liu had given Ai Weiwei's wife legal advice. He is regarded as one of the lawyers who might possibly represent the artist. Although Liu has reappeared in the meantime, his sudden disappearance led to fears that the government now has its sights on the lawyer.

This latest round of repressive measures began in February, following an anonymous online appeal for a Chinese "Jasmine Revolution" -- inspired by the Tunisian revolution of that name -- and for regular demonstrations on Sundays.

On Feb. 20, a lawyer in Guangzhou tweeted: "I have a date today with Miss Jasmine." He also wrote: "Jasmine -- the most frequently used word in the entire world. Today it blossoms on the computer screen, tomorrow in the square." The lawyer was first beaten up by unknown individuals, then he disappeared.

The same day, an activist in the city of Wuxi tweeted: "From now on, I will hold jasmine blossoms and sing jasmine songs. I will be addicted to jasmine." His punishment was reeducation in a labor camp.

There is nothing the Communist Party fears more than individuals banding together into an organization. And the combination of 1.3 billion people, 420 million of whom are Internet users, together with many Chinese people's enthusiasm for microblogs and resentment over problems such as inflation and land seizure, means that the idea of organizing is very tempting. Eventually, the power of the masses might even be strong enough to oppose that of the government. That is precisely what the regime is trying to prevent.

Ran Yunfei, writer and blogger, is another victim of the regime's fears. At one point, Ran used Twitter to redistribute Reuters news stories about the revolutions in North Africa. He also mentioned that there had long been no sign of life from jailed Nobel Peace Prize winner Liu Xiaobo. Ran analyzed China's censorship system on his blog. "In 60 years of controlling the media, there have been variations in the methods," he wrote. "But the goal of concealing the truth and strangling freedom of the press has always remained the same." He predicted: "In the long run, the growth of the Internet will cause official media control to collapse. Of course, it also depends on our efforts." On Feb. 20, police quashed Ran's own efforts to promote free expression. He is accused of inciting subversion of state power.

Ran Yunfei was far from an unknown quantity for the regime. A signatory to China's famous Charter 08, a manifesto calling for democracy, Ran openly expressed solidarity with dissident Liu Xiaobo. Ran's arrest confirms that those in power in China are now using any excuse to settle scores with critical voices who they've long had under observation.

The government is especially targeting lawyers who provide legal assistance to other activists and attempt to strike back against the regime with its own weapon -- the law. Beijing lawyer Teng Biao, who was already suspicious in the eyes of the government because of his past work with the Open Constitution Initiative, an organization offering legal services, says he was threatened by security forces back in December. "Why should we waste words on a person like this?" Teng reports one of the men as saying. "Let's beat him to death and dig a hole to bury him."

Teng also disappeared, on February 19. Shortly beforehand, he had put up resistance in his own fashion -- on Twitter, where he recalled a colleague's detention and publicly exposed police officers who had harassed him during an inspection: "Their badge numbers are 024228, 025581," he wrote. "Very bad behavior."

Beijing's demonstratively hard-line approach can be seen in its methods as well. Family members wait desperately for some sign of life from those who have gone missing, but unlike in the past, the government goes weeks without offering any explanation of these individuals' whereabouts. It makes no effort to even maintain an appearance of due process.

One lawyer at a prominent Beijing firm told American diplomats that breaches of the law had increased continuously since 2008. In a diplomatic cable obtained by WikiLeaks, the US Embassy quoted the lawyer as stating that China had entered its worst-ever period of abusing legal rights.

The regime's program of intimidation is having an impact. One lawyer from Shanghai described online a discussion she had with colleagues about whether or not to go to the demonstrations. Her own opinion was clear: "Anyone who doesn't go is donkey shit." And: "The worst that can happen is that you sweat." She also reproached those who declined to go, saying that: "Because there are people like you, who are afraid to sweat, there are people who bleed for the development of society."

In the end, the people who went to the Sunday demonstrations in China were primarily foreign journalists, along with perhaps a couple of hundred Chinese citizens. No one could say precisely how many of them there were, since all the demonstrators were disguised as passersby.

The government, meanwhile, is afraid of its invisible enemies. It is fighting them by pursuing its visible opponents. The Shanghai lawyer who called on her colleagues to have more courage also disappeared two months ago.