First things first: There is no drug that has been proven to be effective against SARS-CoV-2. The outbreak is too recent and the virus has only been known for a short time. Nonetheless, there are a number of drugs that are being used in patients, mostly as part of clinical studies. The study register Clinicaltrials.gov currently lists 366 studies under the keyword COVID-19.

These include well-known methods such as plasma therapy, in which infected persons are given infusions of blood plasma from people who have recovered from the illness. The antibodies contained in that blood plasma have the potential to protect people against the virus. The antimalarial drug chloroquine is also on the list, as are flu and HIV drugs in addition to a drug used in the fight against Ebola.

The World Health Organization (WHO) launched a large-scale series of studies - under the name "Solidarity” - into the four most promising compounds in March. The goal is for doctors around the world to participate with as little bureaucracy as possible.

As urgently as drugs to fight COVID-19 are needed, however, it is still unclear whether the remedies, some of which date from the last century, are effective against the novel coronavirus. Scientists warn against using drugs too quickly and bypassing previously accepted standards, and against using drugs whose effectiveness has not been proven.

What, though, are the benefits of the drugs currently being used? And most importantly: What do initial findings suggest about their efficacy?

Doctors at a number of hospitals around the world are testing how the administration of blood plasma from coronavirus survivors affects the course of the disease. It takes an average of seven days after infection for antibodies to be detected in the blood of a patient infected with coronavirus. The idea behind the treatment is for the antibodies in the donated blood plasma to bridge the gap and begin attacking the virus sooner.

So far, the findings have been exclusively individual case descriptions from just a handful of patients. In one account, two elderly South Korean patients recovered following plasma therapy. One had initially been treated unsuccessfully with antimalarial drugs and the other was also administered a medication for treating HIV. After receiving plasma infusions combined with corticosteroids, which have long been known to reduce inflammation in the body, the patients recovered.

There have been similar reports from China, where doctors treated 10 severely ill COVID-19 patients with blood plasma from patients who had recovered from the disease, but only after an average of 16 days and in combination with other antiviral agents. According to the authors of the study, symptoms such as respiratory distress decreased within three days, oxygen saturation also improved and damage to the lungs improved to vary degrees after seven days. The physicians were no longer able to detect the coronavirus following treatment and also did not observe any serious side effects.

The individual accounts, however, are not yet sufficient to prove that the plasma therapy was the cause of the patients' improvement. The Chinese scientists wrote in the Proceedings of the National Academy of Sciences that plasma therapy could possibly improve the condition of patients by neutralizing the virus. "The optimal dose and time point, as well as the clinical benefit of CP therapy, needs further investigation in larger well-controlled trials," they wrote.

The antiviral drug remdesivir was originally developed by the pharmaceutical company Gilead Sciences to combat Ebola. The drug inhibits the replication of the genetic material of RNA viruses, a category which includes both the Ebola pathogen and the novel coronavirus. The WHO identified the drug in January as one of the most promising candidates among treatment options. Starting in February, this resulted in the launch of studies in numerous places around the world, some of which are offering some hope.

Because these studies are showing initial indications of efficacy against SARS-CoV-2, the European drug authority EMA recommended last Friday that the drug be used as a possible treatment for seriously ill patients. On Tuesday, the Federal Institute for Drugs and Medical Devices (BfArM) also approved the use of remdesivir in Germany for seriously ill COVID-19 patients.

But even with remdesivir, it’s still not completely certain whether it is actually effective against SARS-CoV-2. Health officials in Germany hope to find out for sure in three clinical trials that have been approved by the BfArM. "All patients included in these studies are moderately to seriously ill and are being treated as inpatients," the Institute wrote.

Chloroquine, also known by its brand name Resochin, has been used since the 1930s as a preventative measure against malaria. But the pathogens have developed resistance to it and the German pharmaceuticals company Bayer ceased marketing the drug in 2019. The company says it is now "ramping up” production again because there are early indications that chloroquine could be effective against SARS-CoV-2.

However, those findings have been derived largely from experiments with cultured cells. It is believed that the drug can block the coronavirus pathogen from invading cells. But it is still unclear how effectively it can combat SARS-CoV-2 in the human body. The fact that the United States president has been touting it without much reflection doesn’t change such doubts - because even if chloroquine or the closely related hydroxychloroquine are generally safe for patients, in rare cases it can lead to retinal problems, restlessness, sleep disorders and gastrointestinal problems. This risk is only worth it if COVID-19 patients really benefit from taking it.

According to Clinicaltrials.gov, at least 13 studies are either planned or have already been carried out on the substances. The BfArM has also approved three clinical trials with hydroxychloroquine against COVID-19. "In one of these studies, people with mild cases of the COVID-19 disease are treated as outpatients," the Institute wrote. "The other two studies include moderately to severely ill inpatients."

The HIV drugs ritonavir and lopinavir are also seen as a source of hope in the fight against COVID-19, mostly stemming from the fact that during the SARS outbreak in 2002-2003, there were indications this drug cocktail could be helpful. For example, lopinavir has been proven to inhibit the completion of viral proteins. Used in combination with lopinavir, ritonavir enhances this effect. The hope is that these drugs can help fight not only the HIV virus, but also SARS-CoV-2. The advantage of these medications is that they have already been in use for years and the possible side-effects are well-known.

A number of international studies looking at the effectiveness of these drugs are already in progress. In some cases, doctors are also using a further medication, interferon beta-1b, a transmitting agent that has an anti-inflammatory and antiviral effect and is used in the treatment of multiple sclerosis and other maladies.

However, the results of a first clinical trial with severely ill COVID-19 patients provided no evidence that the drugs are beneficial. But that doesn’t mean that they are not effective or that they won’t help other patients at a different stage or severity of the disease.

The antiviral drug favipiravir, which is sold under the brand name Avigan, is manufactured by Fujifilm Toyama Chemical. The active ingredient blocks an enzyme that viruses need to reproduce. It is approved in Japan for use against certain types of flu viruses, but with restrictions, because it can be dangerous for pregnant women and unborn children. The drug was used in clinical trials for treatment during the Ebola outbreak, and now it is being tested for use against SARS-CoV-2.

In a study of 240 patients, half of whom received favipiravir and the other half a substance called arbidol, which is also considered a promising drug in China, favipiravir performed better. But the drug was administered in very high doses and given only to patients exhibiting moderate symptoms. In a podcast on the website of German public broadcaster NDR, prominent German virologist Christian Drosten, who has been a leading authority in Germany on the coronavirus, pointed out that it isn’t known whether favipirarvir could be used over the long term because of its side effects.

Research on an enzyme that might prevent the coronavirus SARS-CoV-2 from entering cells at all is still in the earliest stages. It appears that the coronavirus pathogens use the body’s own enzyme ACE (angiotensin converting enzyme) to penetrate cells. Scientists have already shown in cell cultures that the administration of artificially produced ACE-2 appears to intercept the pathogens. Clinical trials are now set to follow, and Germany’s BfArM has also authorized use of the treatment in severely ill COVID-19 patients.

Monoclonal antibodies, meaning antibodies of a specific cell line, have been produced for therapeutic purposes in the laboratory and also used in humans for many years. They have been used often in the past in treating numerous tumor diseases, including lung, bladder and breast cancer. Patients suffering from rheumatoid arthritis or multiple sclerosis are also treated with these kinds of antibodies. Researchers have also already reported on experiments with using monoclonal antibodies against SARS-CoV-2 in cell cultures. 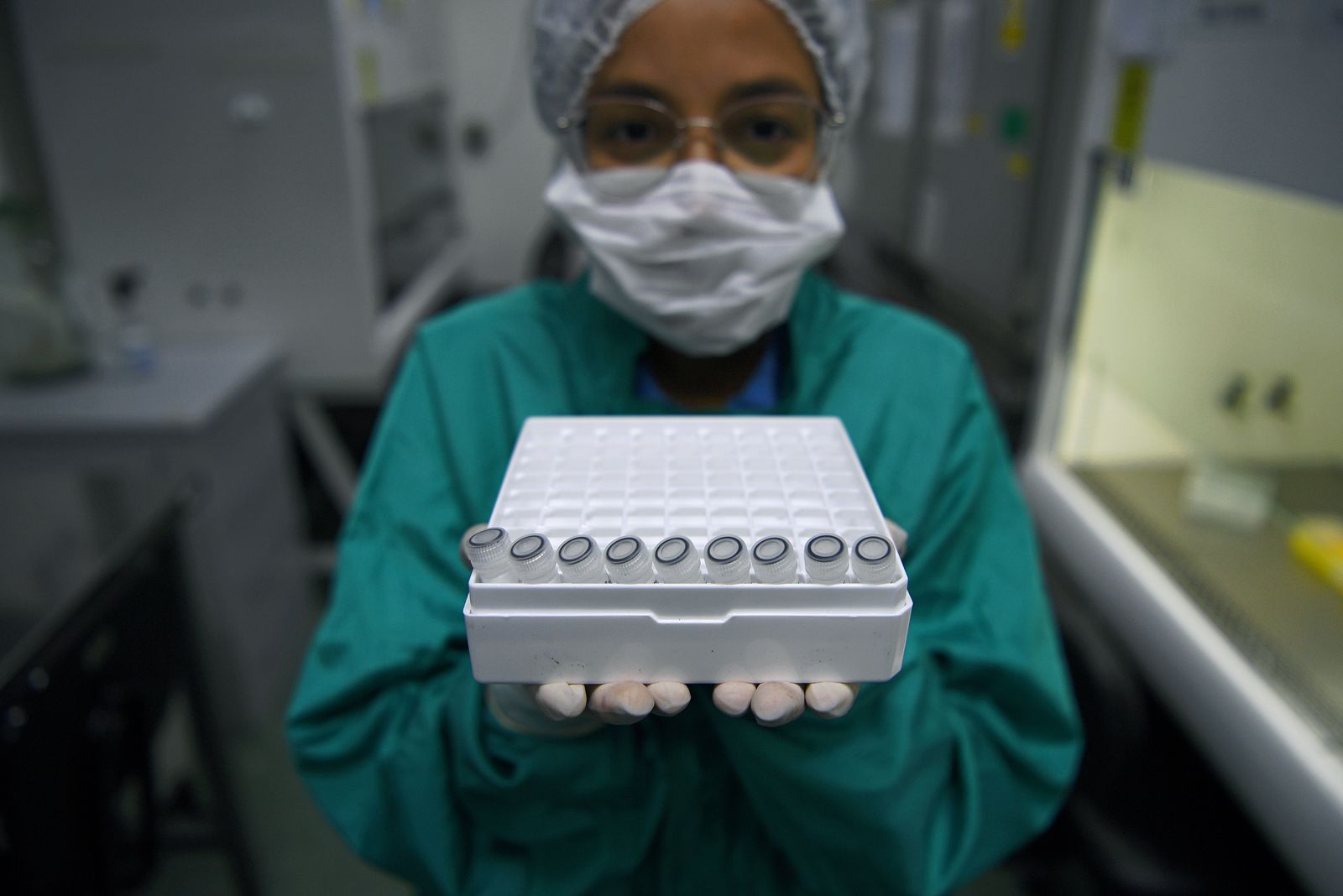 Samples in Brazil are tested for the coronavirus.