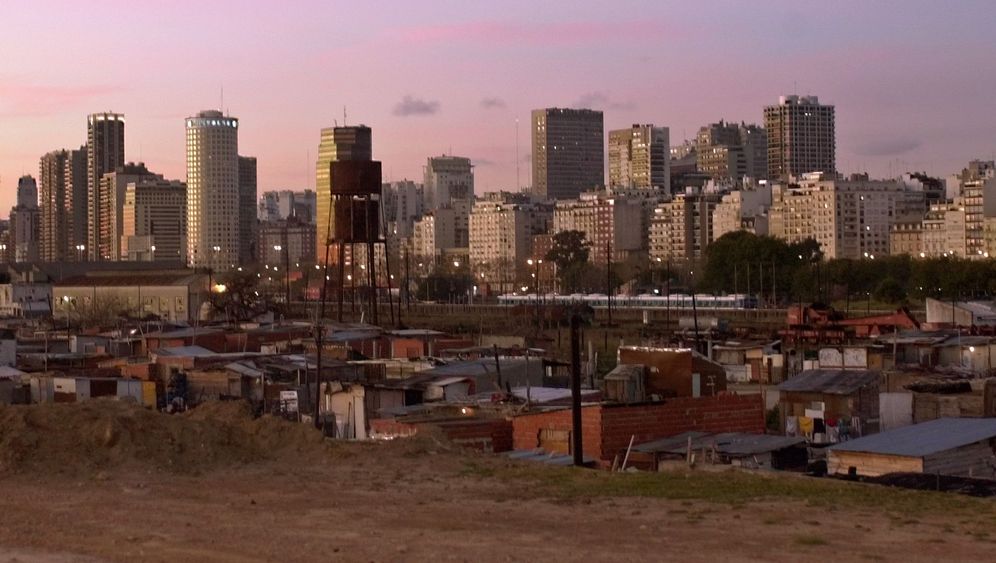 For a retired politician, Roberto Lavagna, 69, is a busy man. The telephone in his office in downtown Buenos Aires rings constantly, as he fields calls from worried bankers in Spain or Portuguese investors seeking advice. The World Bank even flew Lavagna to Madrid for a recent seminar on the euro crisis.

The elegant Argentine is considered a specialist in handling national bankruptcy. It was he who negotiated the restructuring of Argentina's foreign debt during his term as economics minister from 2002 to 2005.

Precisely 10 years ago, South America's second largest economy was on the verge of collapse. The government restricted its citizens' access to their bank accounts and announced a cessation of debt payments. Hundreds of thousands took to the streets in protest, and 30 people died in the unrest. President Fernando de la Rúa resigned in December 2001, ultimately fleeing the government building by helicopter to escape the angry crowds.

Roberto Lavagna was one of those who helped get the nation back on its feet. The price Argentina paid was high: Private creditors had to write off about 70 percent of their investments. Furious foreign investors attempted to have the president's airplane seized during state visits and Argentina was the pariah of the global financial markets. It took currency devaluation and debt restructuring to get the economy back on firm footing.

'Haven't Learned Anything from Our Crash'

But today, this emerging market stands as a shining beacon when compared to crisis-ridden countries in Europe. In the past, European and American politicians were only too happy to lecture Latin American countries on good budget management and debt control. Now, the question when European diplomats visit Buenos Aires is quite the opposite: Can Europe learn from Argentina?

Two American economists, Nobel Prize winner Paul Krugman and crisis prophet Nouriel Roubini, have advised Europe to take a close look at the Argentine debt crisis. "It seems as if they still haven't learned anything from our crash," Lavagna says, pointing out that Europe has prescribed its debt-ridden member countries the same austerity measures that brought down Argentina. "That creates a long-lasting recession," he says, "and the region spirals further and further into decline."

Few countries have the kind of extensive experience with financial crises that Argentina does, a country which underwent three collapses in the space of 20 years. Hyperinflation, chaos at the banks, debt moratoriums, debt restructuring -- the same scenes simply repeated themselves. Argentines saw three different currencies come and go within 10 years and the country was a regular customer at the International Monetary Fund (IMF).

"We're crisis specialists," confirms José Luis Machinea. As economics minister under President Fernando de la Rúa, he had a front row seat as the crash unfolded. Machinea draws parallels to the crisis in Greece: Argentina too was caught in a currency trap, he says, with its peso tied by law to the US dollar.

As a result, Argentina's government had to pay higher and higher interest rates on loans issued in dollars. By the mid-1990s, it was clear the country was headed for a financial crisis. The IMF tied a bailout to a tough austerity program, and Argentina cut pensions and government employees' pay. Instead of stimulating the economy, leaders focused on battling the country's deficit.

By the time the IMF finally approved the first capital infusion after months of negotiations, it was too late. "If they'd stepped in two years earlier, we could have avoided the 2001 crash," Machinea says. He believes Europe could stand to learn a lesson from that experience: "The longer they hold off on saving Greece, the higher the cost will be."

The political consequences of those events can still be felt in Argentina today. After de la Rúa's downfall, the country cycled through five presidents in the space of two weeks. Not until the election of Néstor Kirchner, a Peronist, did the situation settle down.

De la Rúa's party, for decades the political home of Argentina's middle class, atrophied into a mere splinter group, and ex-president de la Rúa became a tragic figure, insulted by passersby when he dared show his face in public. These days, he lives a reclusive life in an apartment in Recoleta, Buenos Aires' upper class neighborhood. Security guards keep watch over the building's entrance and the door to the elevator is locked.

The former president answers the door himself, his face marked by bitterness. De la Rúa considers himself a victim of the IMF and of neoliberal financial gurus in Washington. "The IMF wanted to make an example of Argentina," he says. In particular, he blames Horst Köhler, head of the IMF at the time, for the crash, saying Köhler conjured up "a perfect storm" with his hard-line conditions. "He left us alone in our hour of need," the former president says. Köhler, who went on to serve as Germany's president until his resignation in May of last year, has remained a despised figure in Argentina; to this day, diplomats advise him against visiting Buenos Aires.

De la Rúa, on the other hand, has gradually been able to make forays back into public life. Former IMF Deputy Managing Director Stanley Fischer wrote him an encouraging letter and people in restaurants suddenly want their picture taken with him again, while European friends call to ask his tips on overcoming the euro crisis. "Most of the calls I get," de la Rúa adds, "are from Greece."