Why, for the love of God, has nobody renounced their allegiance to him?

That seems to be the fundamental tenor underlying the media coverage - particularly in Europe – of the election that the world waited for with a mixture of anticipation and dread over the last four years. How is it possible, in other words, that Donald Trump was never significantly harmed by all the transgressions and embarrassments, by his at times subtle and sometimes not-so-subtle racism and by his disastrous management of the coronavirus pandemic?

Despite widespread relief, the election has ultimately been a disappointment for liberal America. Many Democrats had been hoping for a landslide victory for Joe Biden and a devastating defeat for the Republicans and their president. They were hoping for a result clear enough to explain away Trump's 2016 victory as an historical aberration and to cleanse the shame from the American history books. Instead, in absolute terms, Trump received even more votes than he did four years ago.

Torben Lütjen, born in 1974, is a political scientist at the University of Kiel. From 2017 to spring 2020, he taught at Vanderbilt University in Nashville, Tennessee.

As is always the case when results make no sense, the jump to metaphysics is a short one. And just as has occurred several times in the last four years, the discussion quickly began focusing on the "Trump cult," the president's sect that would follow him over any cliff no matter how high, just like a bunch of lemmings.

That view has very little to do with reality. The loyalty of Trump's followers wasn't first and foremost to Trump. Indeed, most of his voters are Republicans and conservatives, first and foremost. They are devout evangelical Christians and libertarian tax skeptics, 2nd Amendment fundamentalists and, yes, white nationalists. The 71.5 million people who voted for Trump are not a monolithic block, they're not a homogeneous rank-and-file commando with red baseball caps as a uniform. They are, rather, a heterogenous collection united only in a powerful conviction that the deck in the country is stacked against them, that their values and their status in society are in danger. For his voters, this reality was always more important than who was at the top.

What stabilized Trump for so long was the extreme polarization in the country, the development of hermetic factions in both politics and society - a phenomenon that began long before Donald Trump's arrival on the scene. His march to the White House followed a scorched-earth path laid out during the three decades of culture war that preceded him.

The Battle for America's Soul

Civil discourse, after all, has been in an advanced state of erosion for a long time, with violence-laden rhetoric having become the norm. The Republican base went feral both morally and intellectually long before Trump's arrival and they are well-nigh addicted to the soundbites and indignation of the kind mass-produced by Fox News and talk radio. Polarization is also the reason why their support for Trump never wavered: Conservative America saw his countless transgressions as mere trifles relative to what was at stake in the much larger battle for America's soul.

Many Republicans have a much more transactional relationship with the president than is widely believed. And not a few are well aware that Trump is a scoundrel, but at least he is their scoundrel. In the brutal, zero-sum game of American politics, they felt that withholding their support from Trump would only have helped their detested opponents. Given what is widely perceived as an existential conflict, most of the over 70 million Trump voters would have voted for whoever appeared at the top of the Republican ticket - just as Democrats would have voted for whoever was nominated as the Democratic candidate.

The Republican bent of evangelical voters and, especially, the migration of the white working class to the GOP began decades before Trump. Even the hedge fund manager Mitt Romney, a man who – in contrast to Trump and his satisfyingly aggressive bluster – was not at all a natural fit with this clientele, won far more votes among this segment in 2012 than Barack Obama.

Despite his own need to see himself as such, Trump was never the architect of an entirely new coalition of voters nor was he the mastermind behind a new movement. He merely continued a trend that had begun long before, and then radicalized two elements of it: white identity politics and anti-institutional populism. None of that, though, was really new, which is why the party – almost bolstered by the election results – can continue on as before, even without Trump.

There is, of course, also an element of the party that has an extreme personal bond to Trump, a fixation that cannot be explained exclusively by way of the party's traditional ideology. That group is made up of those Americans who venerate him as an outsized idol. In the media, they are frequently and misleadingly presented as the archetype of the "Trump voter," a prototype made popular not least by American late-night shows, which consistently managed to single out the densest half-wits from the potpourri attending Trump's rallies and then gleefully film them as they talked about the benefits of injecting bleach.

A Populist, Not a Messiah

It is very clearly these people that Trump is relying on at the moment as he - given the rather low chances of success for his legal challenges – seeks to shift the conflict to the street. It might even work, but even here, branding them as a sect isn't completely accurate.

In media coverage, Trump is still portrayed far too often as one of those totalitarian messiahs from the darker chapters of human history. That is the narrative of the charismatic leader, as described by the late German sociologist Max Weber – a leader who relies on the faith of his followers in his "exceptional qualities," someone who was sent by "history," by "God" or by "providence."

More on the U.S. Election

But Trump's bond with his base is more consistent with the principles of populist allegiance. In that narrative, it's not about exceptionalism but about ordinariness. Despite his boundless self-importance, Trump's followers don't love and worship him because he is different from them, but because they see themselves reflected in him. They believe that he speaks, thinks and feels as they do.

The populist leader is explicitly not sent by God. He serves as the incarnation of his followers, who speak and act through him. That is why Trump's popularity rose higher and higher the more hate and disdain he earned from precisely those institutions that his hardcore followers believe have been most active in degrading and belittling them: the media, the academic elite and Hollywood. He achieved what all populists dream of: that his followers perceived each and every attack on him as an attack on themselves.

For this group, Trump is the primary symbol of their fight for self-assertion. But symbols are replaceable. And that could happen more quickly than we think. It was, after all, the media that made Trump into what he is – first through their reporting at the beginning of what initially seemed to be a futile run for the White House, and then because of the daily war Trump waged against them. Nothing stabilized his position to a greater degree than that conflict.

But even if it is difficult to imagine and although it will certainly take a few months: At some point after the end of this presidency, once it becomes clear to us that Trump really isn't sitting in the White House any longer, we will finally stop drooling like Pavlov's dogs at each and every one of his tweets. As the former president, he will quickly lose his allure.

King of the Swamp

The party, though, will continue on as before. It has often been said over the last several days that the Trump presidency has only produced losers, but that isn't true. There is one man in Washington who can look back at his recent performance with a great deal of satisfaction: Senate Majority Leader Mitch McConnell, a man who, despite having the kindly countenance of a friendly turtle, is unquestionably the craftiest and most ruthless power politician in Washington D.C.

Once it became clear in 2016 that the Trump campaign was gathering momentum and some in the party began considering risky moves to block his rise, McConnell declined to join them. He believed that if Trump ended up in the White House, he would be easy to control and thought that Trump would sign whatever the Republicans put on his desk.

Many at the time felt that McConnell was being incredibly naïve. They saw him as the modern-day version of those conservative Weimar-era politicians who believed they could keep Adolf Hitler on a leash, only to be steamrolled by his mass movement.

But that's not really what happened. Trump did largely implement the Republican agenda by cutting taxes, pursuing deregulation and nominating a series of conservative judges from the list given him by the party. The narrative was that Trump had taken over control of the Republican Party, but it was just as easy to argue the opposite.

And it currently looks as though McConnell might even have defended the GOP majority in the Senate. If it holds up after the two run-off elections in Georgia in January, he will do what he already proved masterful at from 2010 to 2016: make life extremely difficult for a Democratic president and block everything, this time with the insurance policy of a conservative majority in the Supreme Court. If the country doesn't descend into violence - which McConnell wouldn't want because of the effect it would have on the Dow Jones – then his bet on Trump will have been wildly successful.

And in 2024, he will likely throw his support behind the next "populist" who calls for a revolt and promises to clean up "Washington" and drain the swamp. But that won't particularly bother McConnell. After all, nobody knows the swamp better than he does. 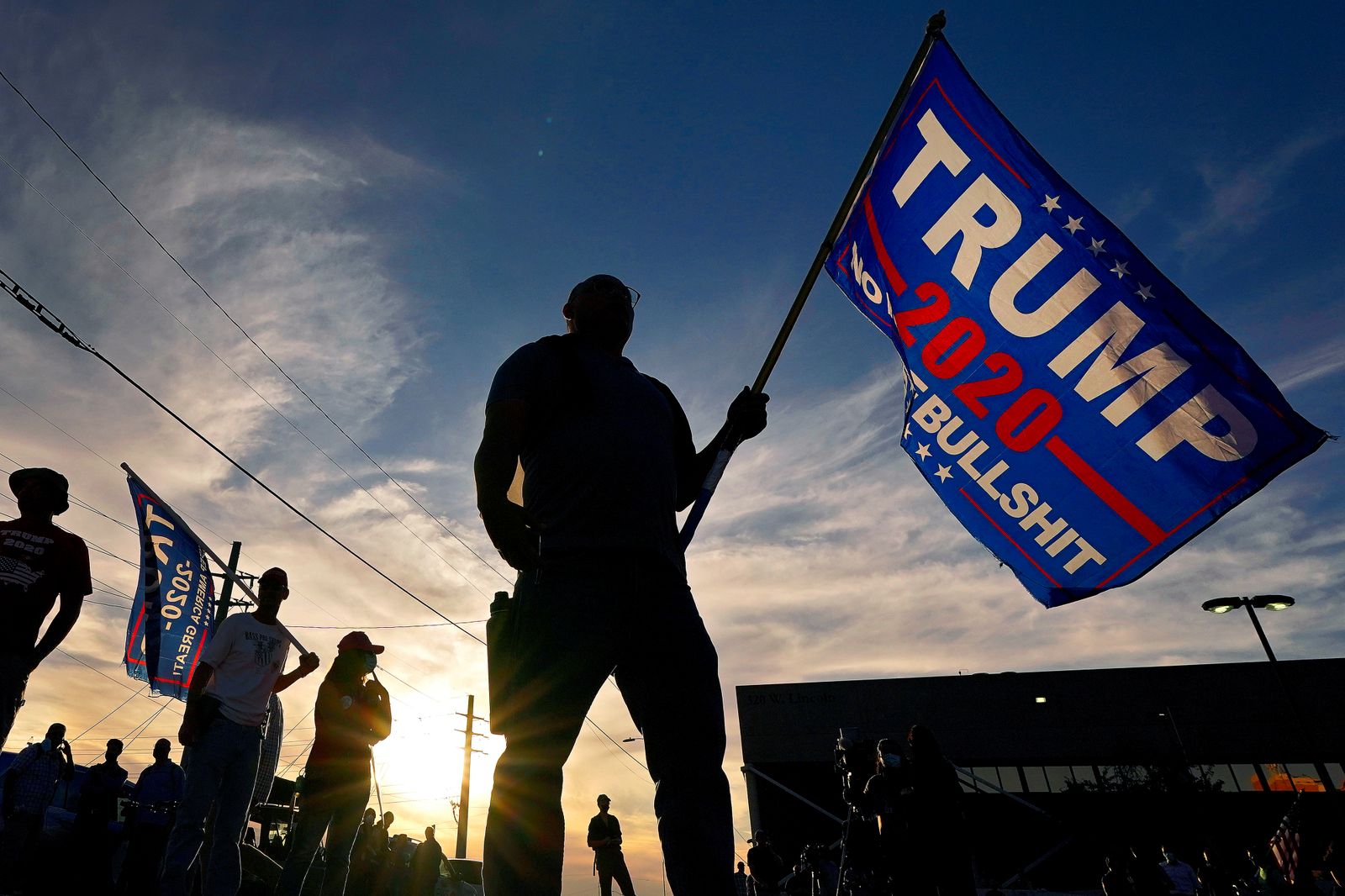