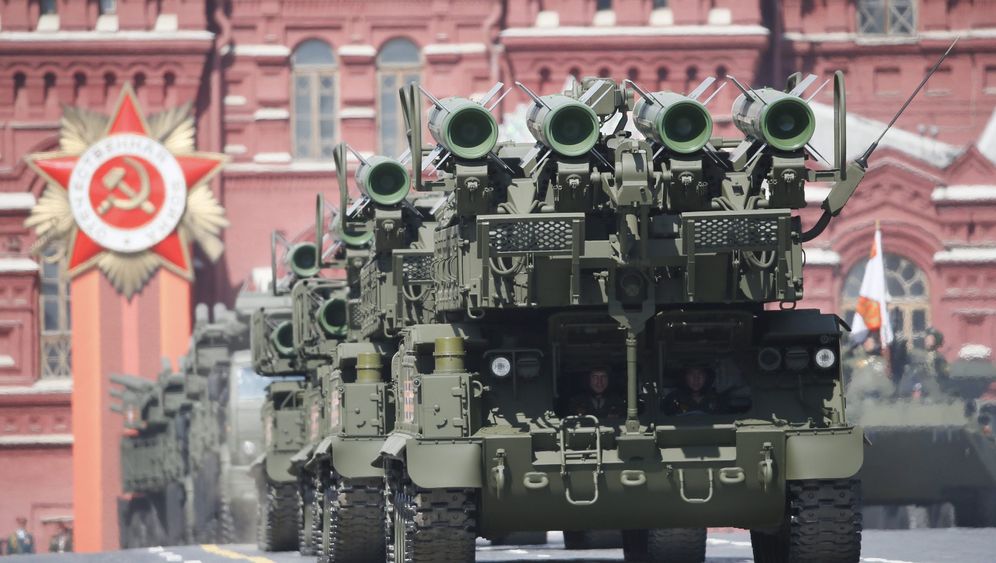 It's been more than three decades since the vast peace protests took over Bonn's Hofgarten meadow in the early 1980s. Back then, about half a million protesters pushed their way into the city center, a kilometer-long mass of people moving through the streets. It was the biggest rally in the history of the German Federal Republic.

Today, the situation isn't quite that fraught, but it seems feasible that a similar scene may soon play out in front of the Chancellery in Berlin. For some time now, the Americans have once again been thinking about upgrading Europe's nuclear arsenal, and in the past week, a rhetorical arms race has begun that is reminiscent of the coldest periods of the Cold War.

Foreign Minister Frank-Walter Steinmeier warned of an "accelerating spiral of escalating words and then of actions." He described them as "the old reflexes of the Cold War."

Berlin is concerned that Europe could once again become the setting of a new East-West confrontation -- and that Germany might once again become a deployment zone. A source in the Defense Ministry suggested that "more (military) equipment may once again be stockpiled in Germany." Washington plans to station tanks, weapons and heavy equipment for 5,000 soldiers in Germany and the eastern NATO countries. US President Barack Obama hopes that doing so will soothe the fears of the Baltic States and countries in Eastern Europe, which, since the Ukraine crisis, are once again fearful of Russian aggression. He also hopes to quiet his critics in US Congress.

For German Chancellor Angela Merkel, this prospect is not a pleasant one. She shies away from publicly criticizing her American allies, but Merkel is loathe to do anything that might heat up the conflict with Moscow. Furthermore, a new debate on rearmament would hardly be winnable on a domestic front. The chancellor would potentially look like a puppet of the United States, one who not only allows herself to be spied on, but who also stands by as her carefully established link to Putin is damaged.

Moscow sees the American plans as a further proof that Washington intends to expand its military sphere of influence in Europe. Foreign Minister Sergei Lavrov's spokesman has said that "Washington and its partners are clearly aiming for the final break-up of the NATO-Russia Founding Act."

Berlin, however, does not want to abandon the treaty. Consistent with the treaty, the German government has fundamentally ruled out the "substantial" or "permanent" stationing of NATO troops in the former Eastern Bloc. That wording was chosen to assuage Russian concerns about NATO's eastward expansion.

The US plans appear designed with an eye toward avoiding an open disagreement. That is why Washington only intends to send a few companies to the border nations, say sources at NATO headquarters in Brussels. The larger part of the brigade will be initially stationed in Grafenwöhr, in the German region of Upper Palatinate. The same is apparently true of the heavy weaponry. The Bundeswehr, Germany's armed forces, estimates that it will include approximately 100 battle tanks. The German Defense Ministry believes that US Defense Minister Ashton Carter will be discussing the details with German Defense Minister Ursula von der Leyen during his visit on Monday.

Still, many NATO member states are critical of the plans, particularly in Western Europe. Internally, some are warning against escalating the conflict with Russia. Stationing weapons in Europe is not characteristic of "an exit strategy," said Luxembourg Prime Minister Xavier Bettel on Tuesday during a visit to Berlin.

The new US plans are only the latest step in an overall period of rearmament, a dangerous development that had already started before the outbreak of the Ukraine crisis. Washington and Moscow have cancelled or undermined one disarmament treaty after another. The end of the Cold War saw the signing of a number of far-reaching agreements pertaining to conventional and nuclear disarmament, from the Treaty on Conventional Armed Forces in Europe to the Strategic Arms Reduction Treaty. But now, the agreements, some of which took decades to hammer out, are losing their value. "Moscow no longer believes the West and the West doesn't believe Moscow. That's terrible," declared Mikhail Gorbachev told SPIEGEL in January. "If one side loses its nerves in this inflamed atmosphere, then we won't survive the coming years," he said.

At issue are longer just conventional weapons, but also nuclear arms as well. Moscow is working on modernizing its nuclear arsenal, and has issued some wild threats. A high-ranking official in the Russian Foreign Ministry spoke in March about possibly stationing nuclear weapons in Crimea. And the Americans, too, are considering expanding their nuclear arsenal in Europe. For some time now, Washington has been thinking about positioning nuclear-equipped cruise missiles in Europe, as it did in 1979 during the NATO Double-Track decision that led the trans-Atlantic alliance into the worst crisis in its history.

The American logic is as follows: For some time now, Washington has been accusing Russia of violating the Intermediate-Range Nuclear Forces Treaty (INF). The legendary agreement, which was signed by US President Ronald Reagan and Mikhail Gorbachev in 1987, signaled the end of the Cold War. In the agreement, both superpowers agreed to scrap all land-based intermediate-range atomic weapons and to renounce them in the future. Now Washington believes this treaty has been violated, and is threatening to react. NATO Supreme Allied Commander Europe Philip Breedlove has already announced that the introduction of a weapon that violates the INF Treaty "can't go unanswered."

"We would like Russia, and our Allies, to know that our patience is not unlimited," said Frank Rose, who is in charge of arms control at the State Department, a few weeks ago. And Principal Deputy Under Secretary of Defense at the Pentagon Brian Mckeon announced that Washington would develop a response to safeguard the security interests of the United States and its allies and that such a response would involve the stationing of land-based cruise missiles in Europe.

In Europe, these considerations are being viewed critically. When the Americans placed the subject on the agenda of the NATO defense ministers meeting in February, the Germans and the French spoke out against NATO retaliatory measures, not least because there was only shaky proof of what weapons the Russians had actually tested.

The allies are having trouble evaluating whether Moscow actually has violated the INF Treaty, which the Russians vehemently deny. Although none of the European intelligence services have better surveillance capabilities than the Americans, nobody wants to rely purely on US findings. It has become known that Washington is particularly concerned about the R-500 cruise missile, with an estimated range of 500 kilometers, and the RS-26 ballistic missile, which could threaten the entire NATO territory. The US believes that both have been tested in a manner that violates the INF Treaty.

The Europeans don't think that's necessarily the case. Members of NATO's Nuclear Planning Group concluded during the last ministers meeting that the refurbishment planned by Moscow does not violate any treaty. Weapons expert Oliver Meier, from the German Institute for International and Security Affairs (SWP) in Berlin, also doubts the US claims: "The RS-26 definitely does not violate the INF Treaty," he says.

But President Obama is under enormous pressure from Congress, wiht lawmakers accusing Obama of being far too willing to give in to Putin. During a hearing several months ago, a number of representatives repeatedly interrupted Under Secretary of State for Arms Control and International Security Rose Gottemoeller.

But Moscow too is increasly casting doubt on the INF Treaty. "It is only a scrap of paper," says military expert Victor Murachovski. "If NATO planes can now already reach Saint Petersburg in five minutes from Estonia, and NATO warships are cruising around the Baltic Sea and Black Sea, then this agreement is worthless for Russia."

In German military circles, though, people are interpreting the Russian saber-rattling as a sign of weakness. Unlike during the Cold War, the Russians do not have as many conventional weapons as NATO. In response, Moscow -- like the West during the Cold War -- intends to rely on nuclear deterrence.

The Bundesnachrichtendienst (BND), Germany's foreign intelligence agency, currently does "not see any substantial change to the danger" posed by Russia. The nuclear threats by Moscow -- Putin announced his intention to acquire 40 intercontinental missiles -- were described by BND Vice-President Guido Müller, in a secret meeting in front of select lawmakers, as little more than a "propaganda show."

According to Müller, the refurbishment plans are well known. Since a speech by Putin at the end of 2014, the upgrade has been seen as a fait accompli by the German intelligence agency. But analysts at the BND believe the chances of success are not high: Purely from a technical standpoint, the modernization of the 40 nuclear warheads in such a short period of time is hardly possible, the BND vice-president said. Russia experts at the BND describe it as "passive aggressive behavior." What's important to Putin is its effect on his opponent, not the degree to which his statements are true.

'A Great Deal of Concern'

For the German government, the prospect of nuclear rearmament would be a nightmare. In the early 1980s, millions of people in Germany, as well as in Italy and the Netherlands, took to the streets because they feared a nuclear war in Europe. As an answer to the Soviet SS-20 nuclear missiles, the Western allies had provided Moscow with a proposal: They were prepared to negotiate about the disarmament of these types of systems, but if the Soviet side wasn't prepared to compromise, the West would station about 600 nuclear missiles on its side. And that's exactly what happened.

For the German government, even the discussion about intermediate-range missiles is touchy. A huge majority of Germans don't want new American nuclear weapons in Europe. On the contrary, they would prefer to see the last American B-61 atomic bombs stored near Büchel, in western Germany, removed.

The Social Democrats in particular remember the Nato Double-Track Decision with horror. It indirectly cost Chancellor Helmut Schmidt his office in 1982, and led the SPD to the precipice of division. It also contributed significantly to the rise of the Green Party. A new rearmament would test the party's ability to stay together, and also erase all chance of a new coalition with the Green Party for the foreseeable future. Rolf Mützenich, deputy floor leader of the SPD in German parliament, is watching developments with "a great deal of concern."

At the end of the 1970s, NATO's armament plans were tied to an offer of dialogue. Today too, the West is emphasizing the need to remain in talks with Putin, but the venues that existed for such dialogue before Ukraine crisis, like the G-8 and the Nato-Russia Council, have all been put on ice. For this reason, Green politician Jürgen Trittin is pushing the German government to immediately begin an initiative to revive the Nato-Russia Council. "We are experiencing a dynamic that can quickly lead to a real arms race," the senior Green Party member warns. Measures need to be put into place, he believes, to interrupt the "tit-for-tat" spiral. For this, the Nato-Russia Council would once again need to become a "site of dialogue." What's needed at the moment, he argues, is "talking instead of arming."