The mass killing in Orlando on Sunday is part of a tragic pattern: Every lethal terrorist attack in the United States in the past decade and a half has been carried out by American citizens or legal permanent residents, operating either as "lone wolves" or in pairs, who have no formal connections or training from terrorist organizations such as al-Qaida or Islamic State (IS).

The 9/11 attacks were directed by al-Qaida from Afghanistan and involved only foreign-born Arab terrorists. But today the real terror threat in the United States is from "homegrown" militants, such as the Tsarnaev brothers, who grew up in the Boston area and carried out the Boston Marathon bombings in 2013, and Nidal Hasan, a US Army major who was born in Virginia and who killed 13 at Fort Hood, Texas, four years earlier.

Omar Mateen, who on Sunday carried out the deadliest terrorist attack in the United States since 9/11, is an American citizen who was born in the borough of Queens in New York City to parents who immigrated to the United States from Afghanistan.

Although Mateen pledged allegiance to IS in a 911 call around the time that he was carrying out his assault at the Orlando nightclub, no evidence has emerged that he received training from IS in Syria or was directed by the terrorist group, unlike the militants who killed 130 in Paris in November and 32 in Brussels in March -- almost all of whom travelled to Syria for training by IS and returned to Europe in order to carry out these attacks.

Mateen is part of a trend of IS-inspired attacks which the terrorist organization has made part of its policy in attacking the West. On May 21 a leader of ISIS called for attacks in the West during the holy month of Ramadan, which began last week. Since then we have seen not only the massacre in Orlando, but an IS-inspired militant killing a French police official, Capt. Jean-Baptiste Salvaing, 42, and his partner, Jessica Schneider, 36, on Monday outside of Paris.

Unfortunately, we will continue to see more of these IS-inspired attacks in Europe and the United States as they are typically carried out by "lone wolves" and are not easy to stop. The homegrown terror threat poses a difficult problem for Western law enforcement, as lone wolves are not communicating via email or on the phone with foreign terrorist organizations, the type of communications that can be intercepted by spy agencies. Nor do they have meetings with co-conspirators of the type that can be monitored by law enforcement agencies.

Given the availability of military-style assault weapons in the States, these lone wolf attacks can be quite deadly, as we saw in Orlando, with 49 dead at the gay nightclub, and in December in San Bernardino, California, where a married couple acting on behalf of IS killed 14 people attending a Christmas holiday office party. In both of these attacks the murderers were armed with legally purchased assault rifles and both were directed at so-called "soft targets," of which there are innumerable ones in the States.

Mateen is similar to other jihadist terrorists that have operated in the States since 9/11. There have been more than 300 jihadist terrorism cases in the United States since the 2001 attacks on the World Trade Center and Pentagon. The perpetrators are not the young hotheads of popular imagination. The individuals in these cases have an average age of 28, one third are married and one third have children. Mateen was 29 when he carried out the attack, has been married twice and has a three-year-old son.

The easy explanation -- that jihadist terrorists in the United States are "mad" or "bad" -- has proved to be simply wrong. Around one in 10 had mental health problems, below the incidence in the general population. Nor were they typically career criminals: 12 percent had served time in prison, compared with about 11 percent of the American male population.

They are ordinary Americans.

How, then, did these ordinary Americans become terrorists? For many of these recruits, their turn to militancy was prompted, at least in part, by a desire for recognition or belonging, often both. Jihad offered them the opportunity to be "somebody." Charlotte-based Samir Khan, who was the first editor of al-Qaida's notorious English language magazine, Inspire, was so excited by the romance of holy war that, driving toward his first meeting with members of al-Qaida in a remote part of Yemen he described it as "enthralling."

There is, after all, something exciting, even heroic, about casting yourself as a holy warrior fighting in a glorious, Allah-sanctioned war against the enemies of Islam -- especially when you might otherwise be just another suburban office worker, as Samir Khan was.

In the 1970s, idealistic American recruits to jihadist groups might have joined other organizations that promised a revolution with the goal of establishing a utopia here on earth, such as Weather Underground or the Black Panthers. Just as it was for these 1970s revolutionaries, there was something glamorous and exciting for American militants such as Khan about leaving behind their otherwise humdrum lives to join the jihad.

Beyond the sheer excitement of joining the jihad, I found that American jihadists were generally motivated by a mix of factors, including militant Islamist ideology; dislike of American foreign policy in the Muslim world; a need to attach themselves to an ideology or organization that gave them a sense of purpose; and a "cognitive opening" to militant Islam that often was precipitated by personal disappointment, such as the death of a parent.

But in each case, the proportion of the motivations varied. For instance, Tamerlan Tsarnaev, the older of the two brothers who carried out the Boston Marathon bombing in 2013, was a non-practicing Muslim who became an Islamist militant once his dreams of becoming an Olympic boxer faded. At the time of the attack, he was unemployed. For him, bombing the marathon seemed to allow him to become the heroic figure that he believed himself to be.

On the other hand, his younger brother, Dzhokhar, had never seemed to embrace militant Islam. He smoked marijuana, drank and chased girls -- hardly the actions of a Muslim fundamentalist. Dzhokhar Tsarnaev's motivations for the bombings were instead largely molded by his older brother, whom he admired and feared, and by his own half-baked opposition to American foreign policy.

What is the Solution?

These stories underline how hard it is to satisfactorily answer the question of why terrorists commit heinous crimes. As the philosopher Immanuel Kant observed: "From the crooked timber of humanity not a straight thing was ever made." It's a useful reminder to journalists and politicians alike that human beings often defy neat categorization.

Given this, how should law enforcement respond? FBI behavioral analysts use a smart framework. They focus on behaviors that show that someone is on what they call the "pathway to violence." The ideology enabling this pathway is a secondary concern; whether they are dealing with neo-Nazis or jihadists, FBI analysts use actions, not ideas, to determine whether someone might carry out an attack. This approach is agnostic about the "Why?" and focuses on the "What?": what a suspect of any ideological stripe might be doing along the pathway to violence, like scoping targets or acquiring weapons.

Of course, the Orlando attack quickly became a major part of the heated American presidential race. Donald Trump's speech in New Hampshire the day after the Orlando attack was billed as his big statement on terrorism. In the end, the speech was short on policy specifics but Trump did briefly flesh out his one big counterterrorism idea. In his words: "I will suspend immigration from areas of the world where there is a proven history of terrorism against the United States, Europe or our allies."

Would this vague plan to suspend immigration solve the problem of terrorism in the States? Hardly. Because as we have seen since 9/11, every lethal jihadist terrorist attack in the United States has been carried out by an American citizen or legal resident.

Not only would the ban be useless to efforts to combat lethal acts of terrorism in the United States, but by imposing what looks like a religious test on immigrants it would also be open to serious legal challenges. Not to mention that it's a fundamentally un-American idea. The United States didn't ban Italian immigration in the 1920s because a small minority of Italians became members of the Mafia, and the country is a richer place for it. 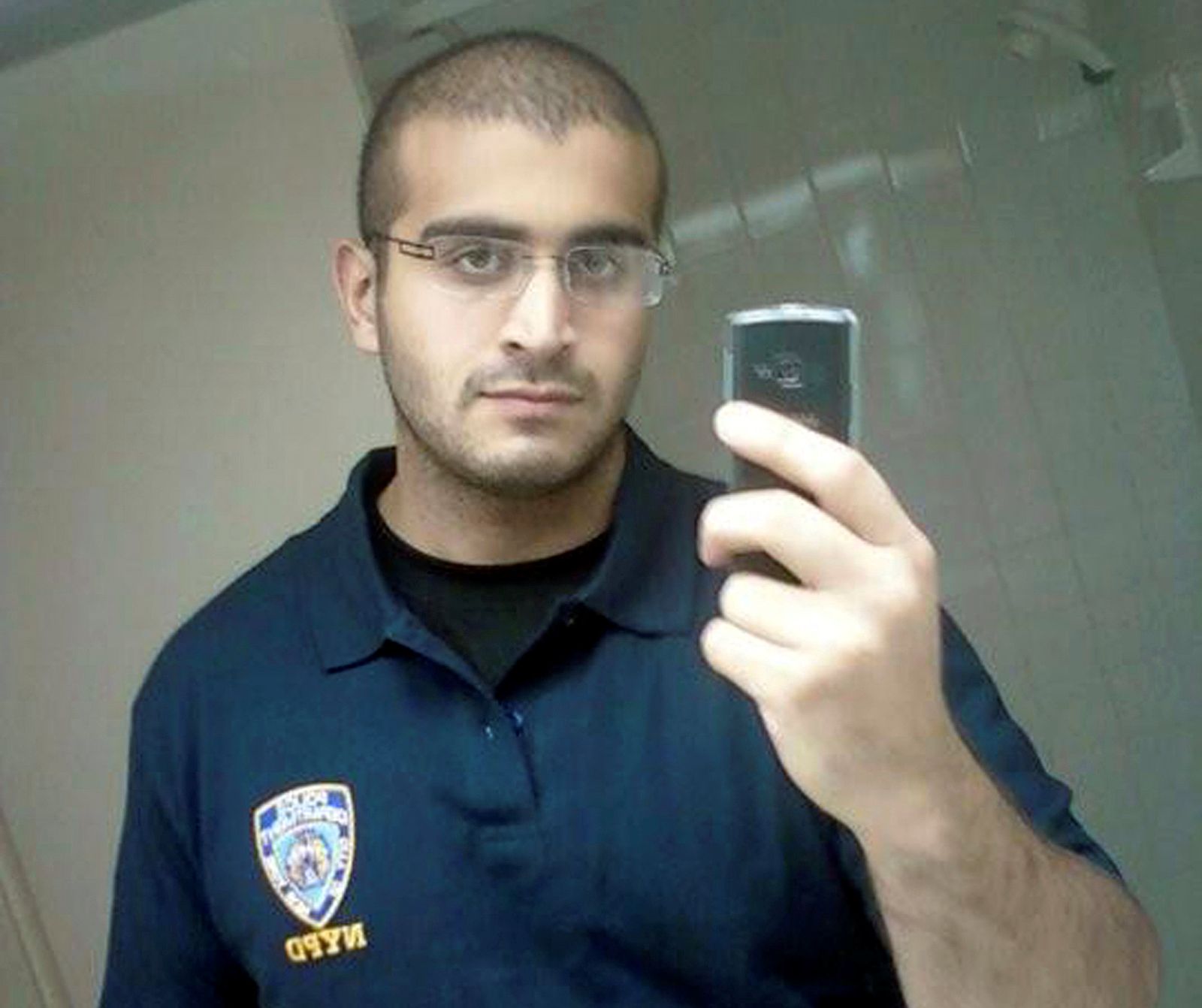 An undated photo from a social media account of Omar Mateen, who killed 49 people in the mass shooting at Orlando's Pulse nightclub.