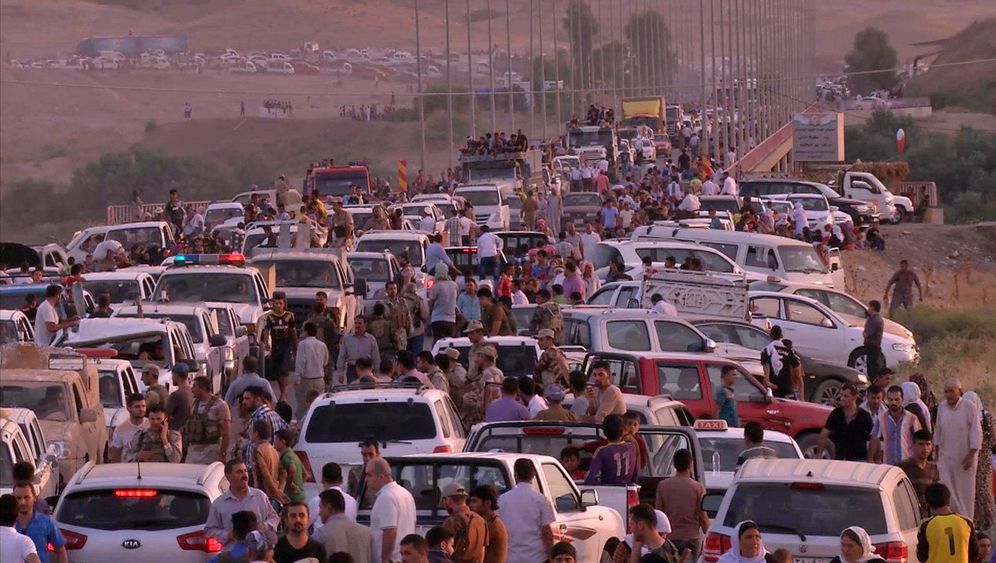 With the exception of a few birds defying the sweltering midday heat, all is quiet on the front, with Kurdish fighters cowering in the shade of the cliffs. Suddenly, sentence fragments from Friday prayers can be heard on the banks of the Euphrates River. "Gather together ... smash the traitors of the faith!" The words from the preacher, distorted by the amplifiers so loved by the jihadists, sound almost spooky.

Down along the river, the jihadists with the Islamic State (IS) gather together for the next attack. A few hundred meters above on the sparse, sun-drenched hills, the Kurds are sitting, feeling like they've somehow ended up on the set of a horror film.

"What do they want from us," asks one young fighter who only a few weeks ago still worked as a cashier in a supermarket. "These madmen keep on attacking and they continue to come at us even after they've been shot. I hit one of them twice. He only stopped after he was shot in the head. They're insane. They come here to die."

Kobanê, known as Ayn al-Arab in Arabic, is a small Kurdish enclave in northern Syria located on the border with Turkey. Since January it has been under siege by IS because Kobanê is located directly in the middle of the terrorist militia's self-declared caliphate. Throughout the entire month of July, every three to four days, up to a thousand militiamen armed with tanks, anti-aircraft guns and mortars would attack Kurds entrenched in the hills. The only reason they have been able to withstand the onslaught is that they began digging protective trenches and building bunkers with cement ceilings earlier this year. The front lines here today evoke those of World War I.

But at the beginning of August, following the deaths of around 100 fighters on the Kurdish side and 500 on that of the IS, this front in northern Syria suddenly grew quiet. Strangely quiet, the besieged locals felt -- before realizing that the main jihadist force had moved around 300 Kilometers (186 miles) to the east into northern Iraq.

After a long period of relative quiet, the IS fighters then surprised residents with a major offensive. Within just days, they had overrun Iraqi cities that had been protected by Kurdish peshmerga fighters. First they took the city of Sinjar, located west of Mosul near the Syrian border. Then they took the Christian city of Qaraqosh and Bartella near Mosul. By Friday, some of the fighters were within 30 kilometers of Erbil, the capital of the Iraqi Kurdistan region.

For the international community, the swiftness with which the peshmerga were forced to retreat came unexpectedly, as did the mass exodus triggered by the IS fighters. Over 100,000 people tried to flee to safety last week.

The rapid advance compelled the United States, 11 years after the start of the Iraq war and almost three years after the official withdrawal of troops, to once again intervene militarily over the weekend. F/A-18 fighter jets and drones conducted targeted air strikes in northern Iraq, using laser-guided bombs against mobile artillery used by the Islamic State in order to halt the fighters' advance on Erbil. Secretary of State John Kerry accused the Islamists of "targeted acts of violence" that "bear all the warning signs and hallmarks of genocide" and must be prevented. Following the dramatic news and photos of the fleeing Yazidis and Christians, the United Nations Security Council unanimously condemned the developments.

IS fighters had already arrived in Sinjar a week ago Sunday. The city is the stronghold in Iraq for Yazidis, an ancient, pre-Muslim religious community, with roots in Zoroastrianism, whose members worship seven angels, including a peacock angel, in addition to god. Radical Muslims have persecuted them as "devil worshippers."

Kurdish troops defended the city for several hours before running out of ammunition. Reports that IS fighters had killed hundreds, or even more than a thousand, of Yazidis could not be confirmed. But fear is widespread, the consequence of barbaric photos and videos posted by the Islamic State in the Internet, some showing shot or beheaded victims. They are turning their reputation for cruelty into a weapon.

Residents fled in long columns of vehicles to the Kurdish cities of Dohuk and Erbil, located around 200 kilometers to the east. But not all made it out. Those without vehicles or who waited too long to make their escape made it as far as the nearby mountains, arid crags devoid of food and water.

Last week, thousands were holding out there, besieged by the jihadists. "There are 700 families here and the first six people have already died of thirst," Khoder Darwish Suliman, the father of a fleeing Yazidi family said by mobile phone, describing the situation. "Three were children. There is no water here, nothing to eat, absolutely nothing." He said people were too afraid to return to their homes. "They're killing us," he said. On Friday, aircraft from the US and elsewhere began dropping humanitarian aid supplies over the mountains as the Iraqi air force had previously done. By then, Suliman could no longer be reached by phone.

The situation in Qaraqosh, a Christian city located 30 kilometers from Mosul, has also changed dramatically in the past week. Some 40,000 Christians lived in the city, which is home to 12 churches and a mosque. In June, a SPIEGEL reporter traveled to Qaraqosh and told the story of Salam Kihkhwa, a 31-year-old Catholic. The small house at the entrance to the city where he lived with his parents now stands empty. The family fled at 8 p.m. last Thursday. It was the moment at which the jihadists finally occupied Qaraqosh.

In the days prior, Salam had been posting horror stories on Facebook from nearby towns, sent to him by friends. And the IS had also been intimidating Qaraqosh residents, cutting off electricity and water supplies. "I don't want to become a refugee and have to live in another country for years," he wrote. He added that he and his family had wanted to remain in their hometown for as long as possible.

'Flight Or Death Is the Only Choice'

On Friday morning, Salam told his own story be phone from Erbil. His voice was shaky from exhaustion and lack of sleep. He said that on Friday, a shell struck near his house, Salam saw dust rise, heard people scream and could then see them running away. "We heard heavy fighting the whole day," he says. Hours later, the streets had emptied completely. The Kurdish peshmerga did all they could to hold on to the city. "We were so scared we could hardly breathe," Salam says. As the first Kurdish fighters began to retreat in resignation that evening, people began leaving their homes. Salam and his parents also squeezed into a car together with their neighbors. Tens of thousands fled Qaraqosh. It would take them several hours to make the 30-kilometer trip to Erbil.

Salam is now living together with seven other families at his cousin's place in the Kurdish capital. He says that many Iraqi Christians have now been left homeless. He has since spoken to acquaintances who hid in Qaraqosh's only mosque. IS militants, they said, have raised the black flag in the city and ordered all remaining Christians to leave. "Flight or death is the only choice we have," Salam says.

On Friday, the British government advised its citizens to leave Erbil because of the advance of the IS and due to concern that the peshmerga would soon run out of ammunition. As early as June, the Kurdish fighters had been ordered only to fire at nearby attackers because of the shortage. Those concerns, however, may now be easing after it was reported that the US has begun directly providing weapons and munitions to the peshmerga. The US is also considering possible ways to evacuate those trapped in the mountains outside Qaraqosh.

Initially, the IS attacks in June provided the Kurds with the opportunity to take areas that they viewed to be Kurdish. Now, though, it means they have a front line with the jihadists that is almost 1,000 kilometers long. In an interview with the Washington Post at the end of July, Masrour Barzani, the Kurdistan Regional Government's intelligence and security chief, said the Kurds had asked the US for assistance but had gotten "not a single bullet. This is the truth that the world should know. So we are left out to fight all these terrorists, all these problems on our own."

US air strikes on IS positions over the weekend and into Monday -- along with the weapons deliveries indicate that is now changing. But the IS "caliphate," which it declared at the end of June, now stretches from the steppe between Marea and Al-Bab in northwestern Syria to an around 100 kilometers outside of Baghdad. Almost the entire border between the two countries is under the control of the IS.

And while the IS may be reminiscent of al-Qaida and earlier jihadist groups in terms of its propaganda, there is a significant difference. The IS acts strategically and with a clear goal: to bring as much land, money, people, weapons and infrastructure as possible under its control.

The radicals have profited from the months-long stalemate among various political factions in Iraq. It has been made worse by Prime Minister Nouri al-Maliki's unwillingness to step down, despite a parliamentary majority demand that he do so. That has hindered the creation of a new government in Baghdad. With a sectarian agenda backed by Iran aimed at bringing the country under Shiite control, Al-Maliki has incensed both Sunni Arabs and Kurds in the north of the country. On Monday, Maliki even deployed elite security forces in Baghdad, underscoring his demands that the country's new president name him to form a new government.

The IS advance would hardly be possible without support from Iraqi Sunnis. Indeed, former US advisor Ali Khedery says the disillusioned Sunnis have "chosen to consummate a deal with the devil." IS commandos, after all, haven't been picky about who they attack. In Mosul, former military officers and Baath Party bigwigs from the era of Saddam Hussein, a Sunni, have been arrested or have disappeared without a trace. In Tikrit, leaders of aligned Sunni Islamists like the Naqshbandi Army have been intimidated or murdered.

US President Barack Obama had been eager to avoid intervention in Iraq absent a new government in Baghdad. But the American air strikes on IS positions still won't solve the fundamental conflicts in these two countries -- conflicts that paved the way for the meteoric rise of the IS in the first place.

For some time now, the lack of strong governments in Iraq and Syria has allowed the IS to operate freely in large swaths of the region. The world, this week, is watching. But it continues to ignore what is happening in northern Syria. The IS is continuing its seige of Kobanê and the Turks have sealed the border to Kurds attempting to flee. At the same time, Turkish officials are doing hardly anything to hinder jihadists who travel in and out of Turkish airports as they make their way into the region.