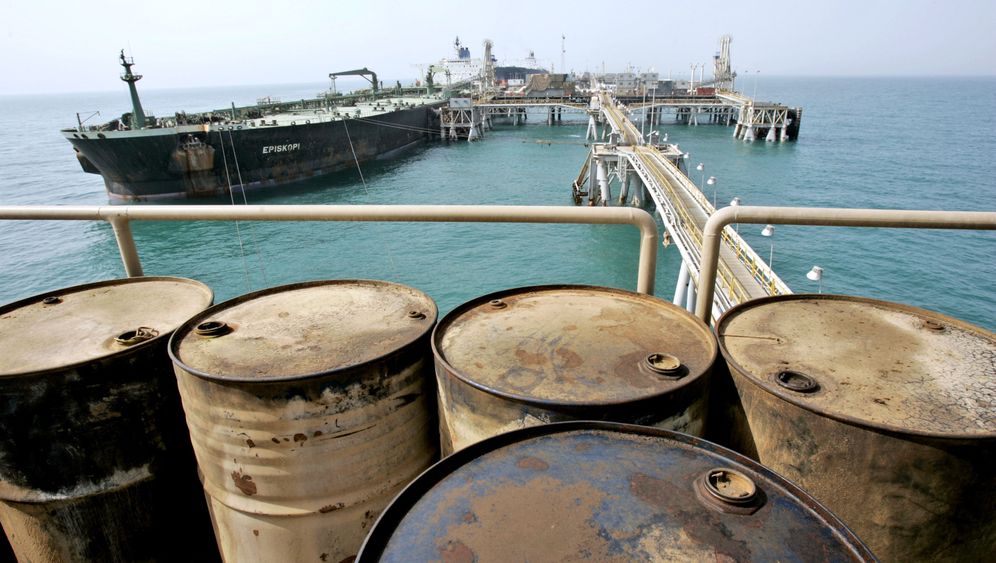 Surprisingly enough, supertankers don't burn very well. Although the crude oil they transport is highly flammable, there is not enough oxygen in their tanks to create an explosive mixture.

On average, 14 of these giant tankers pass through the Strait of Hormuz, located between Iran and Oman, every day. If Iranian President Mahmoud Ahmadinejad actually ordered his forces to fire missiles at one of these tankers, quite a bit of firepower would be needed to set off a Hollywood-style inferno.

But the verbal attacks from Tehran are more than sufficient to set the global markets ablaze.

Last week, prices climbed significantly above the $100-a-barrel mark once again, despite all gloomy economic forecasts. Gasoline prices already reached an all-time high in Germany in 2011. And now the dispute over who controls the Persian Gulf, which has been triggered by Iran's nuclear policies, is a sign that further escalation is on the horizon.

For a full 10 days, from Christmas Eve until after the beginning of the new year, the Iranian navy held nautical maneuvers in an area traversed by the most important route in the international oil business. About a third of all the crude oil shipped worldwide passes through this bottleneck. Vice President Mohamed Reza Rahimi warned that if the West imposed further sanctions against Iranian oil exports, Tehran would not allow "a drop of oil" to pass through the Strait of Hormuz.

But sanctions are precisely what the industrialized countries have in mind. On New Year's Eve, US President Barack Obama signed legislation that prohibits anyone who intends to do business with the United States in the future from having any dealings with Iran's central bank. The law is intended to prevent Tehran from making any oil-related transactions.

It became clear last week that when the foreign ministers of the European Union countries meet later in January, they could very well tighten the sanctions even further, so that the 27 member states will no longer buy a single barrel of oil from Iran. French Foreign Minister Alain Juppé assured that the negotiations over the sanctions are "on the right track."

Oil is being used as a weapon once again, but this time it isn't just one of the exporting nations which is using it -- the industrialized nations are also turning it into an instrument against Iran. A duel of the boycotters is taking shape, a new energy conflict between a supplier and its customers, waged with the tools that each side has at its disposal to exert pressure on the other. The only question is whether their instruments -- embargos and sanctions -- are in fact effective. What exactly can the oil weapon do?

Steffen Bukold, the author of a paper about the oil business, has noticed a remarkable paradox. According to Bukold, the public still perceives the embargo as the most important type of crisis. "But when you look at its actual effect on the oil market to date," says the expert, "it is the least important." History supports Bukold's claim.

The oil weapon was first used in the summer of 1967, shortly after the beginning of the Six-Day War. At the time, Arab oil ministers discussed ways to punish the West for Israel's air strikes on targets in Egypt. Without further ado, the Arab nations decided to stop selling oil to the United States and Britain.

But the embargo was relatively ineffective, because the Soviet Union immediately offered to fill the gap in supply. Besides, the loss of revenue was so painful for the Arabs that they lifted the embargo after just a few days. The first use of the oil weapon had failed.

The next operation happened seven years later, shortly after the outbreak of the Yom Kippur War in October 1973, but it too backfired. At the time, the OPEC cartel decided to almost double the list price of oil from $2.90 a barrel to $5.11. It also pledged to cut back production by 5 percent a month until Israel withdrew from the territories it had occupied in 1967.

The West's reaction bordered on hysteria. Consumers hoarded gasoline and heating oil, and the German government imposed a driving ban on Sundays. Then-Chancellor Willy Brandt called it a "break in postwar history."

Although the events may have been dramatic politically, from an economic standpoint the fears were completely exaggerated, because the market remained extremely well supplied. In the end, Germany lacked only 12 million of the 370 million tons of oil it consumed a year, a shortfall that could easily be offset from other sources. In other words, there was no real bottleneck. Only the fear was real.

In addition, OPEC's united front against the West soon crumbled. Algeria withdrew from the embargo early on, followed by Iraq. When a few producing countries pushed through another price increase to $11.65 on Dec. 23, 1973, Saudi Arabia, the cartel's most important member, distanced itself from the embargo. Once again, the oil weapon had proven to be rather ineffective.

Such lack of unity within OPEC is still not unusual today. At the large conference table in the windowless conference hall of the organization's Vienna headquarters, representatives from Iran, Iraq and Kuwait -- countries that have been at war against each other in recent decades -- sit next to each other in alphabetical order.

There has been a divide within OPEC since its founding in 1960: between moderate countries like Saudi Arabia, which hold immense reserves and plan for the long term, and hardliners like Algeria, Libya and Iran, which take a confrontational approach without considering the consequences.

The agitators studiously ignore a simple mechanism: The price shock they trigger weighs heavily on companies in buyer countries, slowing growth as a result. This reduces the demand for energy and, as a result, the price of oil. Ultimately, the belligerent producers only harm themselves.

Ahmed Zaki Yamani, Saudi Arabia's legendary former oil minister, often warned his fellow cartel members against overstepping the mark. In November 1973, Yamani said that OPEC's goal should not be to "cripple and destroy" the economies of Western countries.

The demand for oil from the OPEC countries declined substantially in the early 1980s, with their share of the global oil supply dropping from about 50 percent in 1973 to 30 percent in 1985. The West expanded its own drilling projects in the North Sea, Alaska and the Gulf of Mexico. The world was faced with an oil glut, and prices dropped below $10 a barrel at times. Western oil companies are still searching for additional reserves today. About 40 percent of new petroleum reserves worldwide are discovered in the deep ocean.

In this way, every drastic increase in the price of oil already holds the seed of its imminent decline. Put differently, the oil weapon is ultimately directed against those who hold it in their hands.

The Countries that Depend on Iranian Oil

The oil weapon used by the consumer countries -- the imposition of sanctions on individual "rogue states" to bring them to reason -- has similar weaknesses.

The West has tried this six times in the last 20 years alone. Although it is probably too early to predict the outcome in the most recent cases, namely Syria and Iran, the examples of Iraq, Nigeria, Sudan and Libya demonstrate how difficult it is to enforce oil sanctions, and how easy it is to circumvent them.

They also achieve other consequences than the desired ones, usually having a much larger impact on ordinary people than on the ruling class, and often leading to hunger and hardship. And when, as in the case of former Iraqi dictator Saddam Hussein and former Libyan leader Moammar Gadhafi, a previously boycotted oil baron was brought down, it was not the oil weapon that sealed his fate.

Oil consumers, for their part, are not a homogeneous group by any means, as the planned sanctions against Iran show. For countries like South Korea and Japan, both of which buy about 10 percent of their crude oil from Iran, it is difficult to find a replacement at short notice. South Korea has agreements with Tehran that it cannot easily breach. And Japan, in the wake of the Fukushima disaster, needs significantly more oil to operate its power plants.

Turkey, which obtains 30 percent of its oil from Iran, doesn't want to alienate its neighbor. Last week, on the same day as Turkish Foreign Minister Ahmet Davutoglu paid a visit to Tehran, an official with the Turkish energy ministry announced that Ankara would ask Washington to exempt it from the sanction rules.

India, a giant country that covers about 12 percent of its oil requirements with Iranian imports, maintains very close relations with Tehran. Finally, China has criticized Washington's sanction plans as presumptuous. Beijing, despite having recently reduced its dependence on Iranian oil considerably, has no intention of taking part in the boycott.

Experts are deeply concerned over the fact that once again a classic Middle Eastern oil-producing country, in the form of Iran, is at the center of a sanction war. "More than 90 percent of growth in global oil production will be achieved in the Middle East and North Africa in the next 10 years," says Fatih Birol, chief economist of the Paris-based International Energy Agency (IEA).

The events of the Arab spring, despite the hopes they have engendered in ordinary people, are already putting pressure on the investment climate in the region today. Countries would rather invest their money in welfare programs than in expanding their oil industry. The political elites are more interested in their own needs than the requirements of the oil market, and the worse the security situation is, the more difficult it becomes to attract engineers and international experts to the region.

But even if bottlenecks do occur, the Gulf countries would have the capacity to make up for shortfalls, says Birol. "In particular Saudi Arabia, which I like to characterize as the central bank of the oil trade, has always behaved very responsibly in these types of situations." The IEA member states, he adds, also have strategic reserves that could be used in an emergency, even beyond the minimum stocks, equivalent to 90 days of net oil imports, that IEA members are required to have.

Nevertheless, economists doubt that the oil markets will function as well and as stably as consumers would like. They will likely be even more heavily influenced by geopolitical interests in the future, especially in the Middle East, and to the detriment of Europeans. In 2015, Europe will already have to import more oil than the United States.

Making Sacrifices at the Gas Pump

Until now, Washington has felt responsible for stability in the Middle East. Birol expects that the region will be less important to the United States in the future than to Europe and China. "Europe will find itself at the forefront of the powers that are responsible for the security of the oil supply," he says.

Under these circumstances, it is questionable whether it makes sense for the Europeans to join an oil boycott. In any case, the oil weapon has proven to be an ineffective instrument in the past, for both producers and consumers. Both sides are always dependent on one another, with the producers needing the money and the consumers needing the fuel. This mutual dependence guarantees that economic realities will ultimately lead to compromise.

But before they can arrive at this insight, the opponents will have to make sacrifices. Citizens in the industrialized nations notice this at the gas pump, where they will pay a few cents more. And the people in the producing countries also notice it, albeit to a far greater extent -- because they will have nothing to eat.