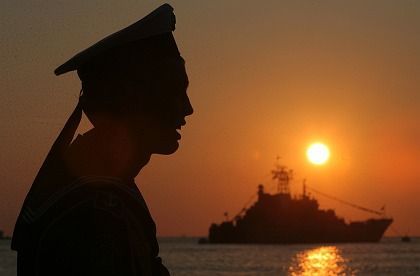 A sailor looks out at a Russian warship stationed at the Crimean port of Sevastopol.

Ukraine, suddenly, has emerged as a major front in the simmering conflict between Russia and Europe. Moscow's invasion of Georgia earlier this month has sent Western politicians scrambling to Kiev, with British Foreign Secretary David Miliband giving a speech on Wednesday reinforcing support for Ukraine. He warned that separatist movements within Ukraine might be exploited by Russia the way they were in Georgia, and promised to assemble the "widest possible coalition against Russian aggression."

Now an upcoming summit between Ukraine's government and the European Union has fresh significance: A major new treaty between the two bodies is due to be signed on September 7 in Evian, France. It will set a framework for future political and economic cooperation, and it may influence Ukraine's future path to the EU. A Ukrainian diplomat said Thursday in Brussels that Germany -- because of its historically close relations with Russia -- can make or break Ukraine's chances of EU membership.

He said leaders in Kiev want a clear statement of support from Europe in the treaty's preamble -- a line that reads: "The future of Ukraine lies in the European Union."

Some European governments oppose the line. Germany prefers a preamble saying the treaty "does not prejudge future relations" between the EU and Ukraine.

The diplomat, Ukrainian Deputy Foreign Minister Konstantin Yeliseyev, was in Brussels this week to discuss Ukraine's relationship with both NATO and the EU. He said Ukraine's acceptance of the treaty would stand or fall on the preamble, according to euobserver.com. Without a firm commitment in this treaty, he said, his country's EU ambitions might be doomed.

Germany, said Yeliseyev, had closer relations with Russia than any other European state -- partly a legacy of ex-Chancellor Gerhard Schröder's term in office. Schröder now sits on the board of a Moscow-led project to build a gas pipeline along the Baltic Sea floor from Russia to the German coast.

Yeliseyev warned that Russia could interpret a failure of the treaty in September as permission to meddle in more post-Soviet states.

But an expert in Russian politics at the German Institute for International and Security Affairs, Dr. Hans-Henning Schröder, told SPIEGEL ONLINE that Yeliseyev's argument was overwrought. "To say Ukraine's chances of joining the EU hangs on a sentence in a single treaty is not serious," he said, since there were so many other considerations for the EU to weigh. Ukraine, for one thing, is not the only nation on the edge of Europe that wants membership. "Turkey is also standing at the door," said analyst Schröder. So a failure to commit to Ukraine's future in the EU on September 7 would not be tantamount to throwing Ukraine into the arms of Mother Russia.

Still, alarm over Ukraine is mounting in the West. Former Russian President Vladimir Putin was icy about the prospect of Ukrainian membership in NATO at a summit for the military alliance in Bucharest in April. If Ukraine joins NATO, Putin said to US President George W. Bush, according to Polish and Russian media, Russia would support independence for Crimea, which at the moment is a Moscow-leaning, autonomous part of Ukraine.

It's also highly strategic. Missile boats and a minesweeper from Russia's Black Sea Fleet, based in Crimea, sailed to the Georgian coast during the war for South Ossetian independence earlier this month.