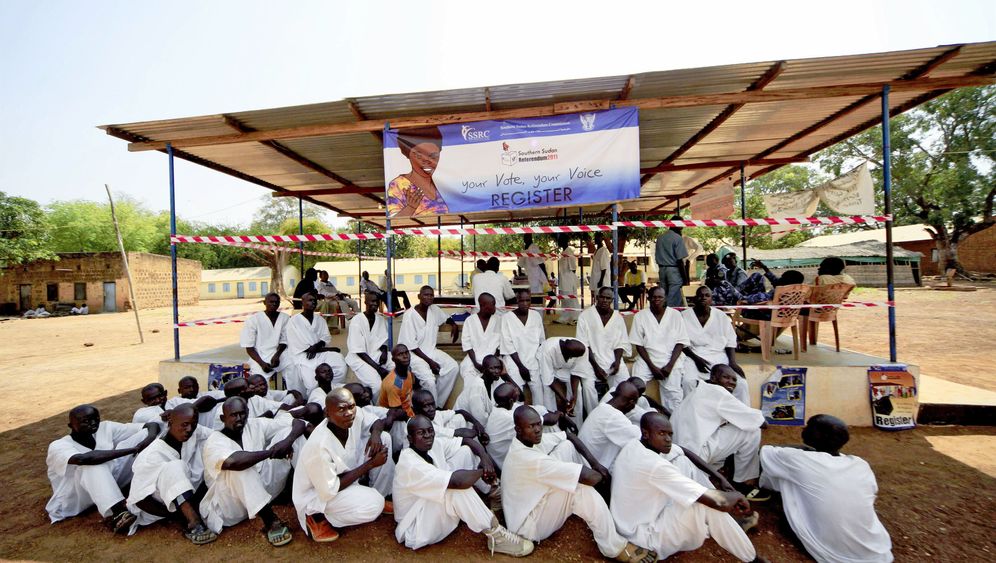 Renk is a town in the southern part of the country, and it couldn't be any sadder. Not a single street is paved, and there are no hotels or cinemas. Instead, there is a lot of dust, sand and stray dogs. On the edge of town live refugees who have made it all the way here from Ethiopia.

In recent weeks, Renk has managed to become even a bit more miserable. Hundreds of inhabitants have abandoned the town, and thousands of them are all packed up and ready to go. At a nearby military base, tanks stand ready for action. It is possible that Renk will soon find its way into international headlines.

These are tense times in Sudan, Africa's largest country. On January 9, the Southern Sudanese will decide in a referendum whether or not to secede from the northern part of the country. Should secession come to pass -- and it currently looks as though it will -- the world will witness the first founding of a new African state since Eritrea split off from Ethiopia in 1993. And Renk would become a place of high strategic value owing to its location near what will presumably become the new border.

Not only Africa, but the entire world is anxiously watching to see what happens in Sudan. The new state would be roughly the size of France and would have sole possession of and authority over more than 80 percent of Sudanese oil reserves. Whether President Omar al-Bashir -- who is already waging a bloody war in Darfur in the western part of the country -- will do nothing should a quarter of his country's sovereign territory slips through his fingers remains an open question. Furthermore, experts are unsure whether the poverty-stricken region's oil wealth will be enough to guarantee its survival.

China and the US are particularly concerned. The Chinese are the largest recipient of Sudanese oil, which satisfies roughly 7 percent of its oil requirements. Washington, for its part, is concerned about having yet more instability in a region which already plays host to problem countries like Somalia and the Democratic Republic of Congo.

In an effort to prevent that from happening, US President Barack Obama has made Bashir an offer he can hardly refuse. The US would strike Sudan from its list of state sponsors of terrorism -- to which the country was added in 1993 after offering sanctuary to Osama bin Laden. In addition, sanctions would be lifted. All Bashir would have to do is refrain from sabotaging the referendum.

Were the South to peaceably break off from the North, it would mark an historic turning point. For 40 years, the Muslim north and the Christian and animistic south have been at war -- disputes between the ethnic groups with Arab roots in the north and the Nilotic peoples living in southern part of the country have likewise always been part of the problem.

The two areas were joined into one country in1947 -- though without any input from the south. And, in 1956, soon after Sudan was granted its independence by Britain and Egypt, civil war broke out.

Brief interludes of peace notwithstanding, the conflict lasted five decades and cost more than 2 million people their lives. The south, despite being blessed with oil, plenty of water and fertile soil, became one of the poorest areas in the world as a result of the fighting. It was only in 2005 that the two sides finally hammered out the first peace agreement.

The Sudanese government in Khartoum has done little to develop a united Sudan. While the capital flourishes, the southern metropolis of Juba is but a dusty provincial town. Universities, hospitals and paved streets are almost exclusively to be found in the north.

With just days to go before the referendum, the people in Southern Sudan exude confidence. "In the north," says Deng Mading, "they never thought it would come to a referendum." The 46-year-old studied social sciences in Cairo and once held a ministerial position in one of Sudan's southern states. These days, his office is to be found in the one and only industrial establishment in the south -- a brewery. For six years, Mading fought the north as a rebel soldier before a bullet in the thigh ended his fighting days. As he sees it, the guerrilla war created strong bonds between the members of the south's future elite. He knows all the people who will soon govern the independent country -- the officers, the ministers and even the head of the central bank.

Mading also believes that the days of guerrilla warfare might finally be over. "But," he says, "it would be dumb if the north instigated war in the oil region" because, this time, the war would also reach all the way to Khartoum. "All you needs are two or three targets," he says, "and public life is paralyzed."

In recent weeks, an endless chain of delegations have been travelling between Juba and Khartoum to find answers to the many questions that would arise should secession become a reality. How will oil proceeds be divided? Who will be held accountable for the roughly $37 billion (€28 billion) in foreign debt that the country has piled up. And what will happen with Abyei, the region rich in natural resources whose position almost exactly on the border between the north and the south might lead them both to try to claim it as their own?

A solution will also have to be found for the floods of anticipated refugees. There are thought to be about 2 million Southern Sudanese living in the north, and hundreds of thousands of them are ready to make the move. Should the south secede, they will likely no longer be allowed to stay in the north. The United Nations estimates there will be some 400,000 refugees headed south in the near future. Meanwhile, thousands of Muslims in the south have already begun to head north.

The Challenges of Independence

In downtown Juba, the capital of Southern Sudan, there is a digital clock counting down the hours and minutes until January 9. Huge billboards herald the "last step to freedom."

But in addition to freedom, the new state would have to focus on a long term battle against poverty and hardship. The south has the world's highest incidence of women dying during childbirth, and nine out of 10 women are illiterate. Half of the region's population has to make do on less than a dollar a day.

Southern Sudan is home to over 1,200 kilometers (750 miles) of the Nile, but there isn't a single bridge spanning the river other than the one in Juba. For the 5.6 million people of Southern Sudan, there is only a singly halfway decent hospital, and it too is to be found in Juba -- and it is not in good shape. Aside from beer and drinking water, nothing is manufactured in large quantities in Southern Sudan.

The designated president of the new state of Southern Sudan is 59-year-old Salva Kiir, a former rebel leader and freedom fighter. Kiir lacks the charisma of his predecessor, John Garang, who died in a helicopter crash in 2005. But he is a skilled tactician -- a skill that could ultimately tip the scales.

In recent months, Kiir has succeeded in bringing all of the minor and major warlords under one tent, presumably with promises of influence and cabinet posts. Still, his speeches have been surprisingly low-key, and he has worked hard to make sure that the Sudan People's Liberation Army (SPLA), the rebel force in the south, plans to remain in the background during the referendum.

The only issue that Kiir hasn't managed to settle with the north is that of oil revenues, which will undoubtedly ignite serious disputes after January 9. While the wellheads are in the south, the pipelines run north to Port Sudan, on the Red Sea. There, the oil is refined and put on ships for export. At the moment, the north and the south split the proceeds almost fifty-fifty. But the south wants to alter the arrangement: Since it has most of the oil wells, it thinks it should get a bigger cut of the earnings.

Pagan Amum, general secretary of the ruling party in the south, is the regional minister in charge of implementing the peace accord -- and he isn't particularly willing to compromise. "The way the oil has been divided up until now isn't a long-term solution," he says. "Khartoum suppressed us and pushed us aside, but all that will now end."

Talks between the north and the south are ongoing in Addis Ababa, the capital of nearby Ethiopia, and in Khartoum. Former South African President Thabo Mbeki is trying to mediate between the two sides.

For the moment, however, there is no solution in sight to the oil dispute. But one thing is becoming increasingly clear: If the south declares independence on January 9, the euphoria might be short-lived and could quickly become disappointment.

Tens of thousands of soldiers, for example, will be discharged from service and there is no plan for what to do with them. Furthermore, the new country will need tens of thousands of teachers, doctors and lawyers, though it is unclear just where such professionals will come from.

For Minister Amum, the most important thing for now is to achieve independence. "We want it in the name of all of those who have suffered," he says. "We want a better life. In January, we will have two states."