"My people love me. They would die in order to protect me!" Libya's dictator Moammar Gadhafi told an American journalist six months ago. He was wrong. His 42-year rule is nearing its end. Rebels have conquered most of the capital city.

But where is the powerless dictator? Has he fled already? Is he still in Tripoli? Is he planning to attack again out of desperation? 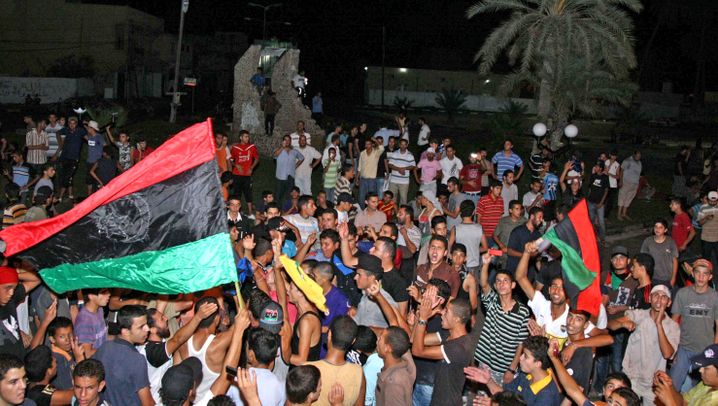 The situation remains fluid and unclear. Reports suggest Gadhafi's son Khamis is leading troops towards central Tripoli. But rebels already have large chunks of the capital under their control.

On Monday morning, there was heavy shooting around the Gadhafi residence where his last remaining supporters are holed up. The rebels announced that they would turn over every stone "to find, arrest and bring Gadhafi to justice."

SPIEGEL has provided an overview of the most important questions and answers.

Can Gadhafi Go Into Exile?

There are conflicting reports about Gadhafi's whereabouts. Diplomats report that he is thought to still be in the Libyan capital. A spokesman for the rebels, however, said that "he does not believe that Gadhafi is still in Tripoli."

In recent days, various rumors have been swirling about what will happen to Gadhafi. Over the weekend, the Saudi newspaper Asharq Alawasat reported that Gadhafi was ill, citing sources close to the dictator. Some speculate that Gadhafi may go into exile in South Africa. The Arabic news channel Al Jazeera reported that two South African planes allegedly arrived in Tripoli.

South Africa denied this report on Monday. In reality, it would be unthinkable for most countries to offer asylum to Gadhafi. Some 116 states have ratified the agreements that set up the International Criminal Court (ICC) in The Hague, and an arrest warrant against Gadhafi was issued in June. That means that if he travels to any of the countries which have signed up to the ICC, they are obliged to arrest and extradite him. The list of countries includes South Africa.

South Africa wanted a negotiated settlement between the Libyan regime and the rebels -- but it won't come to that now. The war and the decades of dictatorship will be the subject of a trial. Gadhafi was just 27 when he seized power in a coup, and he established a balance of power among the more than 140 Libyan tribes by means of a complicated system of incentives and bribery. He laid out his philosophy in his "Green Book," and claimed Libya was a direct democracy.

Libya became more wealthy under Gadhafi, but he also tapped the oil revenues to enrich himself and his family. He supported international terrorist organizations and had opponents of his regime ruthlessly pursued, even abroad. He had a nightclub in Berlin blown up and is alleged to have personally ordered the 1988 Lockerbie plane bombing. He tried to crush this year's rebellion against him with brutal force.

Luis Moreno-Ocampo, chief prosecutor at the International Criminal Court in The Hague, accused Gadhafi in June of inciting his troops to commit mass rape, and claimed that the regime had purchased drugs like Viagra to encourage them to greater sexual violence.

At the end of June, the International Criminal Court issued arrest warrants for Gadhafi, his son Saif al-Islam and Gadhafi's brother-in-law, intelligence chief Abdullah Sanussi. The three men face charges of crimes against humanity including the murder of hundreds of civilians, torture and the persecution of innocent people.

Gadhafi, his son and brother-in-law were personally criminally responsible for the crimes, said prosecutor Luis Moreno-Ocampo.

When Must Gadhafi Answer to The Hague?

It remains unclear whether Gadhafi -- provided he survives his fall -- will be put on trial in The Hague or in his own country, like Egypt's former president Hosni Mubarak. According to the broadcaster Al Arabiya, the rebels were on Monday negotiating his extradition to the ICC in The Hague. But there are conflicting reports about what the rebels want. On Monday, a spokesman for the National Transitional Council said Gadhafi and his aides would be put on trial in Libya. The country had every right to do so, the former Libyan ambassador to the US, Ali Aujal, told Al-Jazeera.

Foreign politicians are also at odds over what should happen to Gadhafi. Italy's foreign minister said Gadhafi must be extradited to The Hague as soon as he is caught. British Prime Minister David Cameron said it was up to the Libyans to decide where to try Gadhafi. In Germany, the chairman of parliament's foreign affairs committee, Ruprecht Polenz, said he should be put in the dock in The Hague. "After more than 40 years of dictatorship Libya doesn't have a justice system that could be relied on to process Gadhafi's crimes," said Polenz.

Legally, Libya isn't obliged to extradite Gadhafi, his son or his brother-in-law because Libya isn't a signatory of the Rome Statute of the International Criminal Court. As a result, the prime responsibility for putting Gadhafi on trial rests with Libya itself.

"But because the UN Security Council obtained the arrest warrant in The Hague, that could entail an obligation to extradite -- provided that the Libyan justice system doesn't show signs of putting Gadhafi on trial in his own country, or isn't capable of doing so," says Albin Eser, professor for international criminal law and a former judge at the International Criminal Tribunal for the former Yugoslavia. Because Libya is a member of the United Nations, it would be obliged to adhere to those rules, he said.

What Punishment Could Gadhafi Face?

There are pros and cons to putting Gadhafi on trial in Libya. A trial at home, like those conducted in Tunisia or Egypt, could be seen as tainted by the desire for revenge. But it could also help to calm and stabilize the country.

It is unclear what sentence Gadhafi would face in Libya. The country doesn't have a working judicial system. In The Hague, Gadhafi would face a life prison sentence which he would probably serve neither in the Netherlands nor in Libya, but in a third country.

Gadhafi's son Saif al-Islam and intelligence chief Sanussi could also face life terms. "But if The Hague were to rule that they only aided him, their sentences could be lower," says Eser.