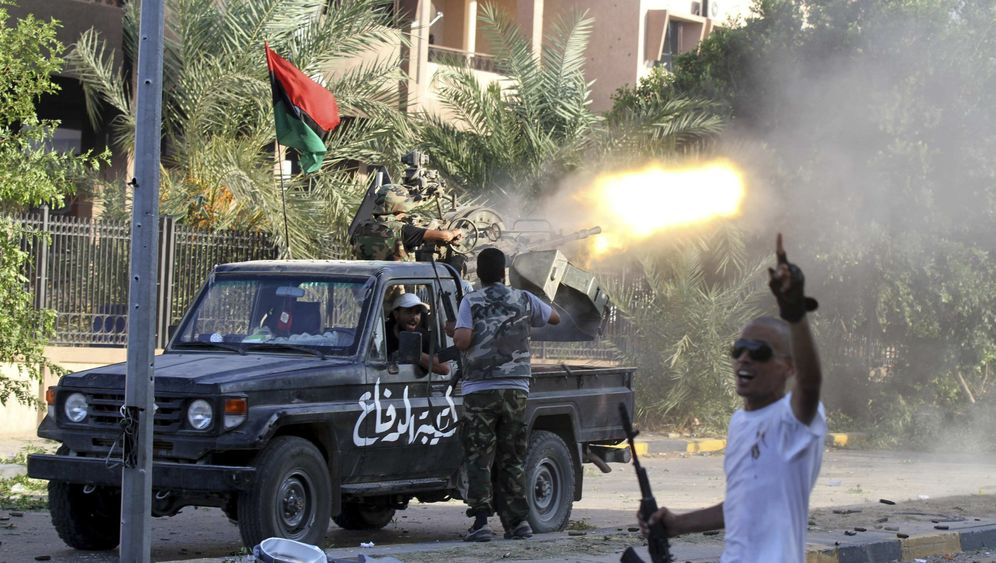 The distance between the celebrations over the presumed rebel victory in Tripoli and the decisive battle against pro-Gadhafi troops was not great on Thursday. It is midday in the capital, and the city is slowly waking up from the slowness of a morning during the month-long Ramadan celebration. Hundreds of Libyans have shown up to take a look at the former center of autocrat Moammar Gadhafi's power.

Prior to Tuesday, the fortress of Bab al-Azizya, surrounded as it is by three security walls, was the center of power for the eccentric despot and his clique. In the center of the complex, surrounded by lush vegetation, stood Gadhafi's Bedouin tent. It was here that he received foreign guests such as Germany's Gerhard Schröder and Tony Blair of Great Britain, offering them camel's milk and dates.

Now, there is nothing left of Gadhafi's tent -- it was burned up during the hours-long fight for the complex which ended in victory for the insurgents. Rebels are now standing in the ruins of several buildings inside the complex; many are shooting their Kalashnikovs into the air in celebration. Nearby, Tripoli residents, some with their children in tow, are exploring the fortress and taking pictures with their mobile phones.

Yet amid all the celebration, the noise from the ongoing fighting against the dictator's last bastion in the capital is virtually ignored. Just five minutes away by foot lies the invisible yet decisive front in this war. Just behind a traffic circle is the Abu Salim city quarter, a non-descript neighborhood of three- and four-storey apartment buildings near the city zoo.

A Disregard for Casualties

From the outside, the district looks as though Libya's revolution never took place. The green flags of old Libya still wave from flagpoles at intersections, while propaganda posters of the supposedly revered dictator still hang on buildings, though they have been destroyed elsewhere in the city. The apartment blocks are the last frontier for the rebels, who have been battling Gadhafi's remaining supporters in their final push to take over the city. "When we take down Abu Salim," the rebels say, "then the fight for Tripoli, and probably the whole country, will finally be finished."

Gadhafi himself, along with his son Saif, is also rumored to be hiding out here too.

The offensive does not look to have been well planned. The rebels are throwing themselves toward an invisible opponent with apparent disregard for casualties. Every few moments, small groups of pick-up trucks race through intersections with squealing tires towards the Abu Salim housing blocks.

For minutes at a time they shoot their rifles and anti-aircraft weapons randomly at the buildings before retreating again. It's unclear just what they are aiming for. "Gadhafi's snipers are everywhere in the buildings," says one young fighter. "In the last few days they have killed dozens of people and shot a number of our revolutionaries." But no one knows how many Gadhafi supporters are still fighting the rebels. It is likely to be several hundred -- and they appear to be armed to the teeth.

'Kill or Be Killed'

Abu Salim, dubbed "Bu Slim" by the rebels, has become a prison for the Gadhafi regime's brutal soldiers. The dictator's scattered henchmen, battered by the fight against the oncoming rebels, have been seeking refuge here for weeks. They didn't know where else to go, Tripoli residents say. In addition to Libyan soldiers, they say, thousands of mercenaries from elsewhere in Africa, promised Libyan citizenship for their services, are also hiding out in the quarter. "Bu Slim" is the last battlefield in the city, but it is a desperate fight waged by those with nothing left to lose but their lives. It's "kill or be killed," says a revolutionary with a shrug.

That the decisive battle is being fought in Abu Salim has a certain irony in view of the history of the revolution. It was here, just a stone's throw away from Gadhafi's tent, that the Libyan rebellion had its origins. Abu Salim is a name synonymous with one of the regime's many notorious prisons. It was here that the authorities brutally put down a prisoner revolt in 1996, an act which ended in a bloodbath.

It was not a political protest. The prisoners, who had mostly been arbitrarily detained by the regime, were simply demanding blankets, basic medical care and to be allowed to wash before prayers. "It was a struggle for a little bit of humanity," says one former inmate today. The regime, however, showed no mercy. For three days, guards and soldiers kept on shooting until all the inmates were dead. Some 1,200 people are said to have been murdered.

It was the anger of their mothers, wives and fathers which ultimately provided the spark for revolution. Most of those killed in 1996 came from the eastern provinces, the home of the deposed monarchy, whose inhabitants Gadhafi had always mistrusted. But the families of the dead, there in the ancient city of Benghazi, refused to give up. Despite the danger, they called for the regime to be held to account, or at least for it to provide an explanation of what had happened behind the walls of Abu Salim.

Back to the Beginnings

In 2008, they even succeeded in holding the only permitted demonstrations, albeit small ones, against Gaddafi's power apparatus: Once a week, the mothers and wives of those killed gathered for a vigil in Benghazi. Gaddafi's son Saif al-Islam offered the families hush money, but they wanted a public confession.

It was only a tiny opening in the rebellion, but the anger of the families ultimately enflamed the uprising against Gadhafi and his cronies. The arrest of Fata Terbel, a lawyer representing the families, provided the first spark for the revolution in mid-February. Because of him, the first demonstrations were held in eastern Libya. They spread quickly, leading to the fall of eastern Libya and ultimately to war against Gadhafi.

This war, so say the rebel strategists, will now be decided in Abu Salim. They want to take this last bastion of the despot no later than Friday. And if they manage to arrest or kill Gadhafi, the war in Libya will likely be over for good. And the name Abu Salim will go down in history as both the seed and the end point of the Libyan revolution.