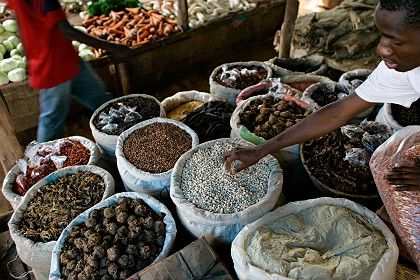 In places like Senegal, it's the world hunger crisis -- not the financial crisis -- that is plunging an increasing share of its citizens into poverty.

As markets plunge around the world and rich countries become increasingly preoccupied with the global financial crisis, 923 million around the world are going hungry waiting for their own multibillion dollar rescue plan.

According to a new study released on Thursday by the international aid organization Oxfam, the world hunger crisis threatens to slip entirely under the radar as developed countries grow more and more obsessed with the turmoil in financial markets. "At the same time when billions of dollars are being allocated to address the financial crisis, it seems as if the world hunger crisis has been totally forgotten," said Marita Wiggerthale, an expert with Oxfam Germany told SPIEGEL ONLINE.

Last May, the prospects for fighting world hunger looked much brighter. At a conference held in Rome, industrialized nations pledged $12.3 billion to help combat the problem. So far, though, only $1 billion has been paid out. To put these figures in perspective, German Chancellor Angela Merkel that would commit up to €500 billion ($669 billion) to help bailout German banks and financial institutions.

A stark increase in food prices over the last year is putting an ever larger portion of the globe at risk for starvation. Over the last 14 months, for example, the price of rice has gone up 66 percent in Bangladesh while the price of wheat has doubled in Senegal and quadrupled in Somalia.

"Since families in developing countries spend almost two-thirds of their income on food, even a small increase in prices can push the poorest of the poor toward starvation," said Wiggerthale. And while "one might think that millions of farmers in poor countries would be benefiting from the recent climb in prices, but that's not happening." The reason, said Wiggerthale, is that farmers are consumers as well as producers of commodities. At the same time that food prices have risen, the cost of seed and fertilizer has also nearly tripled. That's why in countries such as Zambia and Malawi, the poverty rate is rising twice as fast in the countryside as in cities.

The United Nations estimates it would require between $25 billion and $40 billion to effectively respond to the world hunger crisis. The measures taken so far, according to Oxfam, are "totally inadequate."

Still, not everyone is feeling the squeeze from soaring food prices. Several big multinational corporations linked to agriculture are having banner years. Nestle's revenues were up nine percent in the first half of 2008, while sales at British supermarket giant Tesco climbed 10 percent. The biggest winner of all might be agribusiness giant Monsanto: Its profits for the first quarter amounted to $3.6 billion, a 26 percent spike over last year.