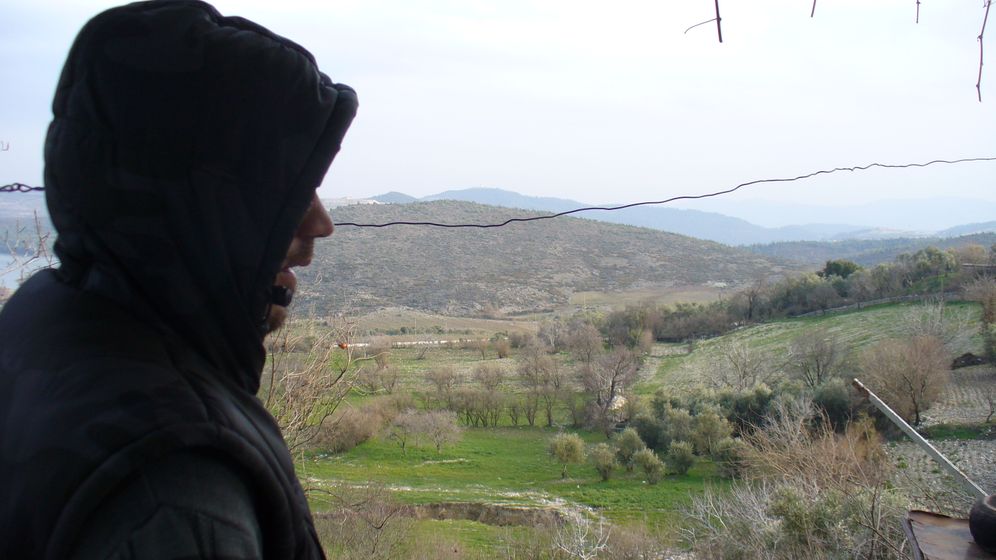 Schafik, a 20-year-old who prefers not to provide his real name, is last in the rebel chain of command. Until about four weeks ago, he served in Syrian dictator Bashar Assad's army. As a soldier, he had been ordered to fire on men, women and children demonstrating against the regime. Now, he's waiting for orders to fight against his former comrades-in-arms.

Before the Arab Spring arrived in Syria a little over a year ago, Schafik was a simple electrician. Then, one Thursday in April 2011, he entered the army to complete the military service required of all Syrian men. "Don't kill anyone," his father said before he left, and Schafik was determined not to. Back then, he was just thinking about making it through and going back to his girlfriend of three years. He was confident she would wait for him.

Not much changed when Schafik went from being a civilian to a soldier. While serving under Assad, he was still repairing cables, laying power lines and installing sockets. What was different now was that he was wearing a uniform, sleeping in a barrack, waking up at 6 a.m. and practicing marksmanship.

Back then, the news out of Homs, Damascus and Latakia seemed far off to him. People were being killed for demonstrating, and Schafik could see pictures and videos online of people being shot. At the time, he was too afraid to confront the question of what he would do if he were one of the soldiers in these places.

Last fall, Schafik was suddenly thrown into combat. Holding an AK-47 in his hand, he marched alongside tanks against demonstrators. His commander ordered him to "fire on anyone who moves," but Schafik says he just fired into the air. After the operation, he bribed a superior officer so he could go home on leave -- knowing full well he would never return to his unit.

After Assad started having his forces fire on fellow Syrians, thousands of soldiers deserted to join the Free Syrian Army (FSA). It's difficult to confirm the size of the loosely organized group. Its leaders claim to have about 40,000 men, but the figure is probably lower. Somewhere around a few hundred are active along the Syrian-Turkish border.

Governments around the world are discussing how or even whether they can stop Assad's assaults. But the killing goes on, and these resistance fighters are throwing themselves into the civil war. "No one is helping us," says one officer. They are trying to defend individual towns and city sections, but they usually have to attack Assad's forces from the shadows before slinking back into darkness. Not much else is known about the FSA other than Assad's allegations that they are "armed gangs" and "terrorists." The ragtag group is up against 200,000 men well-equipped with Russian-made weapons.

The FSA also has an image problem, most recently because of al-Qaida's call for Muslims to join them in fighting the Assad regime. That's one of the reasons why FSA leaders have stressed that they respect all religions. Doing so might help them gain hoped-for support from neighboring countries and Europe.

Schafik's hometown in the northwestern Syrian province of Idlib is one the FSA's strongholds. Just weeks ago, he met up with a few FSA soldiers in one of its suburbs and showed them his military identification, complete with his name, blood type, birthday and date of entry. The FSA said he could join their ranks, but he would first have to go to Turkey. Thousands of Syrians have already fled over the border from Assad's troops, and the FSA has set up a retreat for its fighters there.

Schafik is a thoughtful man whose peach fuzz has yet to turn into a beard. He dreams of a normal life in which he can marry his girlfriend and have children. Now he's a reservist in the rebel army, ready to fight and kill. One of his comrades says, "I have no fear because it is an honor to give up my life." But, in these moments, Schafik keeps silent. Still, he has already made up his mind, as well. Now he's only waiting in a refugee camp near the border for his hero, Abu Hamsa, to call and say that the battle against Syria is on.

The man with Abu Hamsa as his nom de guerre is at the next level up in the FSA's chain of command. The 30-year-old joined the FSA last June and comes from the same town as Schafik. Soldiers usually choose to join units that already include people from their hometowns.

Abu Hamsa squats next to a hot plate that's keeping his tea warm. The officer wears a dark hooded jacket whose camouflage has almost faded beyond recognition. Four days ago, he returned over the Turkish border from his last operation so he could plan his next one.

The fighter rarely spends time in the refugee camp. Instead, if he can be found at all, it's usually in the tiny villages along the border that one can only reach by traveling over bumpy roads, through fields or along the old smuggling paths that the rebels use as supply routes. At night, porters can be found carrying medicine, blood supplies, bandages, rice, beans and clothes on these paths through the mountains.

Still, to get weapons and ammunition, fighters have to look elsewhere. Some they nab them during firefights. Others they buy on the black market in Libya and Jordon or from Syrian militias who do business with both sides. An AK-47 assault rifle costs $1,000 (€750).

Abu Hamsa rarely talks about his missions. But he enjoyed a recent success when he attacked three tanks and killed 21 of Assad's men. The FSA's strategy is to launch surprise attacks and then quickly retreat. Indeed, it really doesn't have much of a choice. While Assad's forces have tanks, airplanes and heavy weapons at their disposal, Abu Hamsa's men ride around on tractors. There could soon be a huge offensive he says. But he adds that how long this fight rages on "depends on whether we can get more weapons."

Danger Even Behind the Border

The house where Abu Hamsa meets with his men is owned by Turks who support the FSA. Mattresses cover the floor and a television playing Al-Jazeera lies in the corner. The men sit along the wall, drinking tea, smoking Winston cigarettes and charging their mobile phones.

The Internet, which they can access from two laptops equipped with USB modem sticks, is their lifeline to the outside world. An FSA officer recently found shocking new pictures from Homs showing severed male heads. The men rely on Skype to stay connected to supporters and other Syrian comrades. "Skype is the most important program of the revolution," says one fighter, who explains that this is because it is harder to monitor than Facebook. Abu Hamsa will spend the night elsewhere, probably in the mountains or a nearby village. He doesn't stay in one place for too long.

The rebel chain of command starts behind the fence of the Apaydin refugee camp. Here, the Turks house about 150 Syrian defectors. Abu Hamsa once lived there, too. These soldiers are led by Col. Riad al-Asaad, who until recently was the highest-ranking officer to defect. A recent disagreement over who is actually in charge erupted after a general defected and tried to assume control of the rebels. But for Abu Hamsa and his men, there was no question about who their leader would be: Asaad. In their mind, the courage displayed by early defectors trumps a fighter's former rank in Syria.

Asaad and the other "big names," as Abu Hamsa calls them, cannot freely move around because they are so closely watched. The Turkish government fears that Syrian agents will try to kidnap them. And it's not an unfounded fear. An officer popular among rebels was nabbed in Turkey under unexplained circumstances, brought back to Syria and reportedly executed. Turkish authorities recently detained five men believed to have played a role in the abduction.

Given such lurking threats, Riad al-Asaad and other leaders only keep in contact with men like Abu Hamsa. However, unit commanders are free to decide on when and how to launch their attacks. When he is ready to go to battle, Abu Hamsa will call on men like Schafik to join him.