The polar bear looks sad. Its white fur is dripping wet, lying flat against its thin body. The ice is melting under its paws. The creature looks desperate as it wanders around on the last remaining ice floes.

Such photos and TV images have turned this dangerous predator into a touching symbol of climate change. "The polar bear has become an icon," says Geoffrey York, who studies the animals in Alaska for the World Wide Fund for Nature (WWF). The giant panda has been the symbol of the WWF for many years. "If we were looking for a logo today," says York, "we would certainly choose the polar bear."

This week York will travel from Anchorage to Tromsø, Norway to attend the polar bear meeting sponsored by the Norwegian Polar Institute. In Norway, York plans to fight to save the animal that shares the distinction of being the world's largest land predator with the Kodiak bear. "But we will only be successful if we finally curb emissions of greenhouse gases, which lead to rising temperatures in the Arctic," York says.

The conference begins on Tuesday, and will include representatives from Norway, Denmark/Greenland, the United States, Canada and Russia. These countries reached an agreement to protect the polar bear in 1973, when excessive hunting threatened to wipe out the species. Today, the threat of global warming has brought together politicians and scientists in Norway once again to discuss ways to ensure the long-term survival of the polar bear.

This time, though, it promises to be more challenging. Zoologists still disagree over the extent to which rising temperatures are in fact detrimental to the animals. "Just evaluating the situation is difficult enough," says Andrew Derocher, a biologist with the University of Alberta in Canada. The scientific community lacks reliable observations, especially from Russia's eastern Arctic and from eastern Greenland. "Those areas are extremely hard to reach," says Derocher.

Furthermore, polar bears travel thousands of kilometers across ice and water. They have no territory, and they are even more difficult to count than some butterfly species in the rainforest.

To address this concern, Derocher will fly across the sea ice in a helicopter this spring, sedating polar bears with a dart gun so that he can tag and examine the animals. He plans to attach GPS collars to about 50 bears and monitor them via satellite. "We will then extrapolate our observations to the total population," the scientist explains.

According to rough estimates, a maximum of about 25,000 polar bears live in 19 different populations in the north polar region today, 60 percent of them in the Canadian Arctic. Even more difficult than estimating the current population is determining whether the individual populations are growing or shrinking. "To do that, we would need somewhat reliable data from the past," says Derocher.

Relatively precise counts exist for only two regions, one in the Beaufort Sea north of Alaska and one in Canada's Hudson Bay. As it turns out, populations there have declined significantly -- by about 22 percent in the western part of Hudson Bay alone. 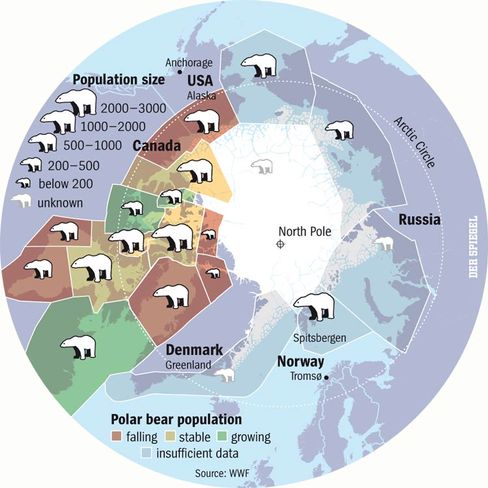 The polar bear population of the Arctic.

Derocher is not surprised by these numbers. Drastic melting of the sea ice is taking place in both regions. In Hudson Bay, for example, the ice arrives three weeks later than in the past and disappears three weeks earlier. This means that the bears living on the perimeter of the bay must go without food for an additional month and a half before they can hunt seals from the ice floes and put on the 10-centimeter layer of fat they need for the winter. "Because of the melting sea ice, the animals there are thinner and have fewer offspring," says Derocher.

But does the same thing hold true for other regions? The picture is by no means uniform. Some populations, such as those in the Davis Strait between Greenland and Canada's Baffin Island, even appear to be growing. The team of scientists working with Jon Aars of the Norwegian Polar Institute in Tromsø also report stable populations in the region they monitor, the Spitsbergen archipelago.

"After excessive hunting in the 1950s and 60s, the populations are now recovering," says Aars. As a rule, the farther north the animals live, the less affected they are by melting sea ice. "Their habitat is not yet threatened as much as it is farther south," says Aars.

This north-south gradient is already evident in the Spitsbergen archipelago, where the polar bears are migrating to the more northerly islands, which are still surrounded by enough sea ice in the winter. Polar bears also travel regularly between Spitsbergen and Franz Joseph Land, an archipelago 350 kilometers (220 miles) to the east, where ice conditions are still more stable.

But how much longer will the animals be able to follow the receding ice? According to climate models, the ice will recede at an especially rapid pace in the Barents Sea, in the northwestern corner of which Spitsbergen is located. "That's when things will get tight," says Aars.

Ironically, polar bears are still hunted the most in their more southerly ranges in Canada, where receding ice poses the greatest threat to the animals. "The population is stable," Gabriel Nirlungayuk, director of the department of wildlife in Nunavut Province, says defiantly. The Inuit official believes that the scientists' warnings are exaggerated, calling them "not very constructive."

The Inuit invoke their thousands of years of experience in fighting polar bears, which they glorify as their "companions." They claim that the populations they have seen recently on their hunting trips are unusually high, and they also cite large numbers of polar bears that have recently begun encroaching on settlements. Scientists like Derocher accuse the Inuit of drawing the wrong conclusions from this observation. "The animals are coming into the settlements because they have less to eat," he says.

In January, the opposing sides attended a round table meeting in Winnipeg organized by the Canadian environment minister. The Canadian government had given in to the Inuit's' demands and removed polar bears from their list of endangered species, giving them the weaker classification "species of special concern." "Canada threatens to become the bogeyman worldwide when it comes to protecting polar bears," says Derocher.

This dubious distinction was held by the United States until now. Former President George W. Bush was also opposed to classifying the polar bear as an endangered species, because it would have meant recognizing climate change as the cause. Two weeks ago, President Barack Obama reversed his predecessor's policy. From now on the polar bear will receive stronger legal protections, which, under the US Endangered Species Act, could lead to measures against climate change.

In taking these steps, the new US administration can rely on the latest studies by biologists, which conclude that the number of polar bears is declining dramatically, in parallel with the disappearing ice. "There could only be a third as many polar bears in 2050 as there are today," says Derocher. Significant populations, he says, will only exist in the far north, such as in northern Greenland or on Canada's Ellesmere Island.

The bear's dependence on the ice is sealing its fate. "It can only hunt seals in the water, and it needs the sea ice to do so," says Derocher. A solution to this dilemma hardly seems to exist. Scientists all but rule out Ursus maritimus surviving purely as a land animal. Eating seals is the only way the bears can survive the frigid polar winter.

This is also apparent in regions where the territories of polar bears and brown bears collide. Brown bears hibernate to preserve strength. But polar bears romp across the ice all year long, jumping into the water and drying off in the snow, except during the period when the offspring are born. To survive, polar bears have developed astonishing abilities in comparison with their brown-furred relatives. They can smell seals under meters of ice and can appraise the course of drifting ice floes before deliberately choosing them as means of transport.

It is completely false to portray polar bears as victim of climate change because they seem almost shipwrecked as they drift through the Arctic Ocean on broken-off ice floes. "The bears love to travel longer distances on drifting ice," says Derocher, setting the record straight.

More recently, Derocher has observed polar bears increasingly tearing into the cadavers of whales that have been killed and disemboweled by the Inuit. "They seem to tolerate the unfamiliar meat extremely well." Nevertheless, this easy prey remains merely a minor diversion in the polar bear's daily feeding ritual, too insignificant to be a true alternative to hunting seals.

"We conservationists hardly stand a chance of helping the polar bears in their habitat," says Derocher. "Society as a whole must decide whether it wants to do without such an extraordinary creature or some of the luxuries of our civilization."