The quote printed in SPIEGEL 33 years ago was a noteworthy one, and still sounds remarkably topical: "We have to ensure that this Soviet empire, when it breaks apart due to its internal contradictions, does so with a whimper rather than a bang." The sentence was spoken by US Secretary of Defense Caspar Weinberger during an interview conducted in September of 1981.

This week in Ukraine, one of the core regions of that former empire, it is looking very much like a "bang." Thursday in Kiev has seen bloody violence that has cost the lives of dozens amid gunfire and brutal clashes on Independence Square. Hundreds have been wounded, many seriously. The violence comes on the heels of similar battles on Tuesday -- and mark the beginning of what could become an extended and dramatic conflict over the country's future. 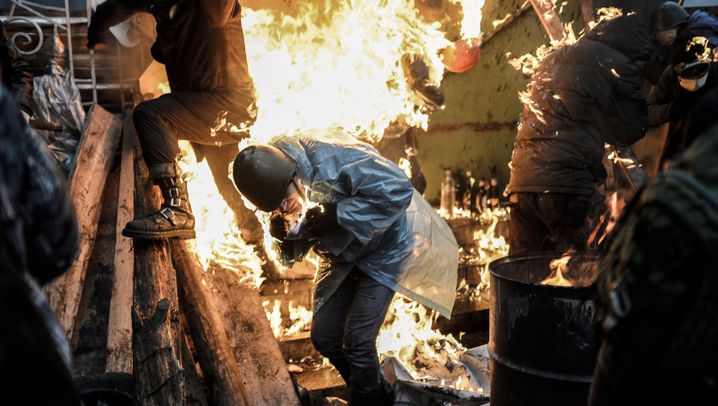 Photo Gallery: The Disintegration of Kiev

Some of those who have traveled to Kiev to view the situation first hand in recent weeks are fully aware of what a "bang" looks like -- US Senator John McCain, 77, for example, a veteran of Vietnam who was shot down in 1967 and spent over two years as a prisoner of war. In December, he stood on the Independence Square stage in Kiev and called out: "People of Ukraine, this is your moment! The free world is with you! America is with you!"

In other words, the Cold War has returned and Moscow is once again the adversary. The only difference is that the weapons have changed.

It is no longer just the association agreement with the European Union that is at stake. Nor is the future of President Viktor Yanukovych, a man surrounded by rumors of corruption, the focus anymore. Rather, geopolitics has taken center stage and the question as to which power centers in Europe and the Eurasia region will be dominant in the future has become paramount. Former US National Security Advisor Zbigniew Brzezinski once compared the region to a chess board. The players, as always, include the US, Russia, the EU and NATO.

It's a chess game in a minefield. Just how explosive the country called Ukraine really is became clear from a background interview given by former Russian Prime Minister Yegor Gaidar -- a liberal reformer and friendly to the West -- in 2008, one year before his death. Those wishing to make Ukraine a member of NATO, as was the intention of then-Ukrainian President Viktor Yushchenko, overlook the fact that it would put Russia in an untenable defensive position, he said. The effort, he added, should be abandoned.

Brzezinski would love to have put Moscow in checkmate. In his book "The Grand Chessboard," he writes that without Ukraine, Russia "would become predominantly an Asian imperial state" at risk of being drawn into conflicts in Central Asia. But if Moscow were able to gain control of Ukraine and its resources, Brzezinski wrote, the Russian Federation would be a "powerful imperial state." He saw danger in a potential "German-Russian collusion" and in the possibility of an agreement between Europe and Russia with the goal of pushing America out of the region.

Essentially, Brzezinski's point of view is one that guides American strategy to this day: The US wants to keep Russia as far away as possible. If the Europeans get involved in Ukraine and harm their relations with Moscow, that is fine with Washington.

Indeed, US Deputy Foreign Minister Victoria Nuland's infamous "Fuck the EU" gaffe, can hardly be seen as a mistake. Rather it is a logical, if somewhat vulgar, expression of America's geopolitical stance.

Weakness in the US Strategy

There's a weakness to this strategy though: In contrast to the former Baltic Soviet republics with their small populations, it would be difficult to integrate Ukraine with its 45 million residents in the same way.

The country is also deeply divided. The economically weak regions in the west are bastions of nationalists. And Ukraine's major companies, like its steel mills, ship and turbine building operations are located in the east and are focused on the Russian market.

Russian is the predominant language in daily use in the capital city of Kiev, millions of Russians live in the eastern part of the country and on the Crimea as well. The Black Sea peninsula was first transferred to Ukraine in 1954, and against the will of the people living there.

Indeed, Crimea could soon become the next hot spot in the conflict. Russia's Black Sea fleet is stationed in Sevastopol, a source of irritation for Ukrainian nationalists and friends of the United States.

At an event in Kiev in October, US Ambassador Geoffrey Pyatt described a "myriad of opportunities" if Ukraine aligned itself with the United States and said "you have no better friend in this endeavor than the United States. … We stand ready to support you, the Ukrainian people, as you find your place in Europe."

Sweet promises like that, which seem tantamount to blank checks, have the potential to drive one of Europe's poorest countries into civil war. It's not just a government apparatus suspected of corruption that is on the verge of faltering in Ukraine -- the foundations of a country whose current borders are hardly sustainable at this point are also being shaken. The tactics adopted so far by Yanukovych's regime of alternating between brutal strikes and the temporary retreat will only further radicalize the protest movement.

When field commanders capable of anything lay down the law, the dynamic of secession begins, as we previously saw in the Caucuses. The presidium of the Crimean Supreme Council has already threatened that it may urge residents to "defend civil peace" on the peninsula.

Thus far, the Kremlin hasn't sought to encourage separatist sentiment in eastern and southern Ukraine. And it doesn't appear that Vladimir Putin and his system of power is interested in the prospect of a civil war in his backyard.

But it still has the potential to break out even if Moscow doesn't want it. Those familiar with Ukraine's history know that the militant nationalists in the west of the country have gone time and time again into battles they can't win. After World War II, the Ukrainian Insurgent Army waged a senseless partisan war for five years against the Soviet state, leaving thousands dead on both sides.

German Foreign Minister Frank-Walter Steinmeier has called Ukraine a "powder keg" that one cannot allow to be lit. Whatever the case, romanticizing revolution can only end in a "big bang" -- the fallout from which would extend far beyond Ukraine. 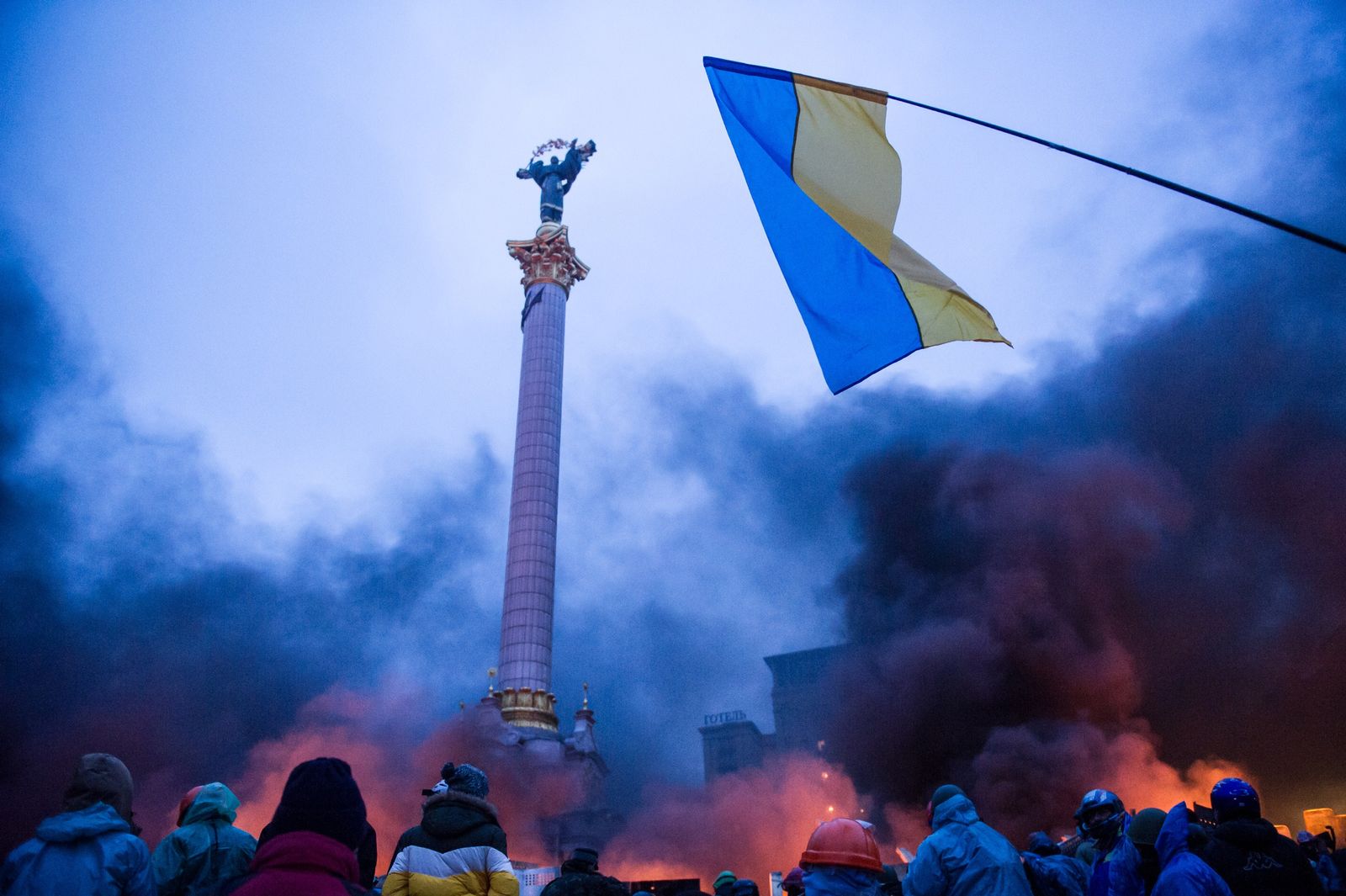 Smoke rising on Independence Square in Kiev on Thursday.