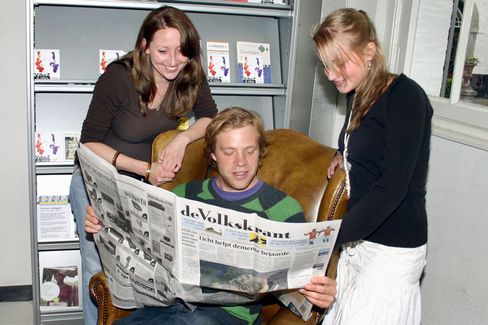 Students at the University of Maastricht in the Netherlands. Most of the college's masters programs are only offered in English.

Hundreds of students have convened on the Academieplein square in Groningen. The band is ready to play when rector magnificus Frans Zwarts lifts a glass of champagne on the steps of the university building: "Let's toast," he says in English, raising his voice. "To a very successful next academic year."

There is some hesitation before the students start to cheer. "I wish you all the best." Earlier in the day, Zwarts had already given a speech in English during the official convocation in the Academie building, because "the number of international students at the University of Groningen is almost 10 percent of the student population."

The role of English in Dutch higher education is growing rapidly, and not only in festive speeches. The proposal to make English the official language of instruction at Dutch universities was first introduced in 1990 by the country's education minister at the time, Jo Ritzen. If Dutch higher education wanted to continue to pull its weight in the sciences, Ritzen argued, it had to become more international.

Dutch intellectuals were up in arms. Aside from the objection that it just won't do to squander one's own language, they feared students' education would suffer and that Dutch academia would lose its uniqueness.

Ritzen quickly recanted at the time and said he "hadn't meant it that way." But the sincerity of that comment is quickly belied by a glance at Maastricht University, where the same Ritzen has been chairman of the executive board since 2003. Of the 19 bachelor's programs offered in Maastricht, nine are given in English this year, as are all 46 master's programs -- with the exception of one (Dutch law). For a few master's -- medicine for instance -- one can still opt for a Dutch version.

Of the Netherlands' general universities, Maastricht is leading the pack in offering its programs in English, but other universities aren't far behind. At the University of Amsterdam, for instance, 105 of the 170 master's programs are offered in English. Dutch has been all but banished there. In Utrecht, 89 of the 196 master's are in English. English is most commonly the language of instruction in economic subjects and life sciences. It goes without saying that language and literature courses still lag behind in this respect, although subjects like general literary theory are already being given in English.

Internationalization is the magic word everywhere. Education has become an export product and a university's competitiveness is measured, particularly by the executive boards, by the number of foreign students it hosts. At many faculties, deans are charged with tasks like organizing partnerships and student and faculty exchange programs with universities around the world.

"It is part of globalization," says Gerry Wakker, deputy dean of education and internationalization in Groningen. "More and more people are working abroad for a long or short time or they are studying there for a year. We prepare them for that by creating groups of students that are as mixed as possible."

Internationalization of the university world is broadly supported, but criticism of its excesses is also growing louder.

"With an English-language master's in philosophy you get the ridiculous situation that our German students have to read Kant in English," says Douwe Draaisma, a history of psychology professor in Groningen. "I think the fact that our rector magnificus gave the convocation speech in English sends the wrong signal. You give the impression that it can't be done otherwise now, while you reinforce exactly that."

His colleague Auke van der Woud, a history of architecture and urban planning professor, says it is outright "rude." "It makes Dutch a second-class language, a cast-off," he says.

The critics also see the rise of English as a threat to the quality of education and research. "Internationalization has become nothing more at our universities than a switch to English," says Draaisma.

In his inaugural lecture in 2005, Draaisma already argued that the switch to English hinders rather than helps the cosmopolitan academic. "You can travel where you like, but if all universities teach in English and prescribe English literature, then everywhere is going to start to look the same," he says. A great deal of science can also be lost, he says. Prominent figures in history who wrote in German or French could disappear from the curriculum just like that. "Moreover, the Dutch were always an intermediary between English, German and French. We are now losing this role."

Some Dutch science has already been lost since Dutch scientists no longer write in Dutch. There is no incentive for them to do so because you have to publish in English-language journals in order to have any status in academia.

It's a Monday morning at the University of Tilburg, and Marloes van Engen is giving an English-language bachelor's/pre-master's course titled "Social relations in organization". Her English is decent, but you can hear it is not her native language. Van Engen is one of hundreds of Dutch lecturers who have had to make the switch to teaching in English.

"I manage," she says. "But I cannot improvise as much during lectures in English. I can't just pull an example out of my sleeve and I don't make jokes here and there, all things that make my Dutch lectures more fun."

This experience is shared by all the lecturers who were approached for this article. It is also the outcome of four surveys since 1995 about the quality of classes taught in English. These classes generally require more energy and preparation and many teachers find the process "exhausting."

Even someone like Martin van Tuijl, an economics lecturer at the University of Tilburg who has been teaching in English since 1995, says it still takes a great deal of effort. "You say to yourself: the dominant language in economics is already English, it should be easy. And to a certain extent that is true. Explaining the basics is quite simple. And yet, if I think of a great anecdote, I just say it in Dutch. In English I think, never mind, I might get halfway through and then not know how to finish it."

As at most universities, the lectures in Tilburg are evaluated after the course ends, also in terms of the quality of English used. Students are asked to fill out a questionnaire. The students' comments tend to be very courteous. "You can usually follow it, although there are some teachers whom it wouldn't hurt to take a course," says Anne Kersten, 22, at the end of a lecture about social relations in organization.

Even the first-year students in international business, who chose the English program so that they will be able to study or work anywhere in the world, are generally satisfied. "What I do find unfortunate," says Chris Janssen, 18, "is that we only have Dutch lecturers. I don't want to learn 'Balkenende-English', the kind where everybody can hear that you're Dutch." (Dutch Prime Minister Jan Peter Balkenende is often poked fun at for his heavy Dutch accent and somewhat clumsy command of English.)

The criticism is also directed at so-called "Denglish" expressions, whereby Dutch sentence constructions and terms are too literally translated into English. Students at all universities complain about this type of common error. Indeed, the back issues of university newspapers are full off sarcastic remarks about the broken English of many lecturers.

Two surveys at the University of Delft (taken in 1995 and 2003), in which Dutch and English classes were compared, came to the conclusion that there was also loss of information transfer in English lectures. Has anything been done about this in the meantime?

According to Tilburg economics lecturer Van Tuijl, "class observations" are extremely rare. "There has long been talk about introducing some kind of peer review for lectures to determine whether they meet a certain standard of education," he says. "Naturally, the quality of the lecturer's English would have to be included in that. But nothing has ever come of it."

Only now are language tests for lecturers being introduced at the universities. But there are no concrete sanctions for failing these tests.

Applied linguist Hilde Hacquebord in Groningen argues that a solid language policy is necessary if universities want to become more international. From her own experience and research she knows, for example, that interactivity can often help.

According to Douwe Draaisma, universities need to be more discriminating instead of just deciding to switch all master's degree programs into English overnight.

"Let's just agree: What makes sense in English and what doesn't?" Draaisma says.