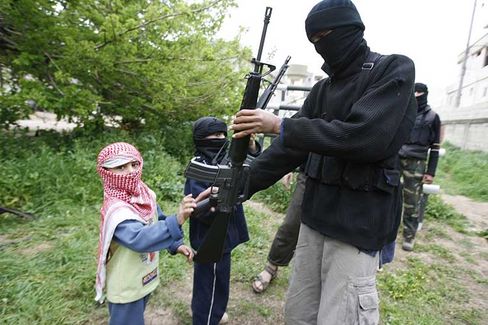 Palestinian militant groups have moved from a traditionally nationalist to a more strongly religious fundamentalist ideology.

More than 100 people have already died. But when Sheikh Mohammed al-Bakri, who lives just a few streets from the battleground, assesses the situation, he concludes that things are going well.

"People are joining us in droves in the Palestinian camps," says the preacher from Tripoli in northern Lebanon. "We Salafis have never been as powerful as today."

He is interrupted briefly by the sound of artillery from the nearby Nahr al-Bared refugee camp. Then he points out that Fatah Islam -- the group that is currently engaged in a bloody battle with the Lebanese military on the edge of Tripoli -- is only one of the militant fundamentalist Muslim movements active in Lebanon. "We have many others: Jund al-Sham, Jund al-Islam, Usbat al-Anfar. Some have existed for decades. Others, such as Fatah Islam, have only formed recently."

The Middle Eastern community of Palestinian refugees and their descendants numbers 3 million. Today, 400,000 of them live in Lebanon -- and they represent more than 10 percent of the total population. The circumstances in the camps are miserable: the sanitary conditions are scandalous, and young people's prospects are depressing. Since neither the governments of Lebanon nor the secular Palestinian leaders have ever achieved anything for them, radical fundamentalist Muslims like Sheikh Mohammed are now reaping the grapes of wrath: Groups like Fatah Islam have a following in the Lebanese camps similar to that of Hamas in the Palestinian territories.

But the goals of these groups are now quite different from those of Hamas, not to speak of the distance that separates them from Yasser Arafat's old Palestinian Liberation Organization (PLO). "We are not interested in the artificial borders in the Middle East," says the fundamentalist Muslim sheikh. "What is 'Lebanon,' anyway? What is 'Syria'?" The struggle of these groups is one for the umma, the nation of believers. If he had to come up with a geographical name, then, the sheikh says, the struggle would be for "Bilad al-Sham" -- the name of the Ottoman province on the eastern Mediterranean during the days of the Caliphate.

It has been a long time since the Palestinians were driven by left-wing, socialist ideas. "Solidarity," "sacrifice" and "martyrdom" have become purely religious terms. Even Fatah, Arafat's movement, has long taken to glorifying the suicide attacks of its Al-Aqsa Martyrs Brigades with religious symbolism. The ideologies have changed, and fundamentalist Muslims are gratified to note the slow death of traditional nationalism.

Fatah al-Intifada ("Conquest of the Insurrection") was the name of the leading force in the Nahr al-Bared refugee camp, before Shakir al-Absi, a friend of slain al-Qaida leader Abu Mussab al-Zarqawi, took control of the group. Today it's called Fatah Islam. "The movement has successfully been hijacked by the Salafists," says Sheikh Mohammed al-Bakri. "The same will happen to the other nationalistic groups."

In March, al-Absi announced his ultimate goal was to reorganize the Palestinian community in Lebanon in accordance with Muslim law. Only then, he added, would that community be prepared for the second and most important mission -- the struggle against Israel.