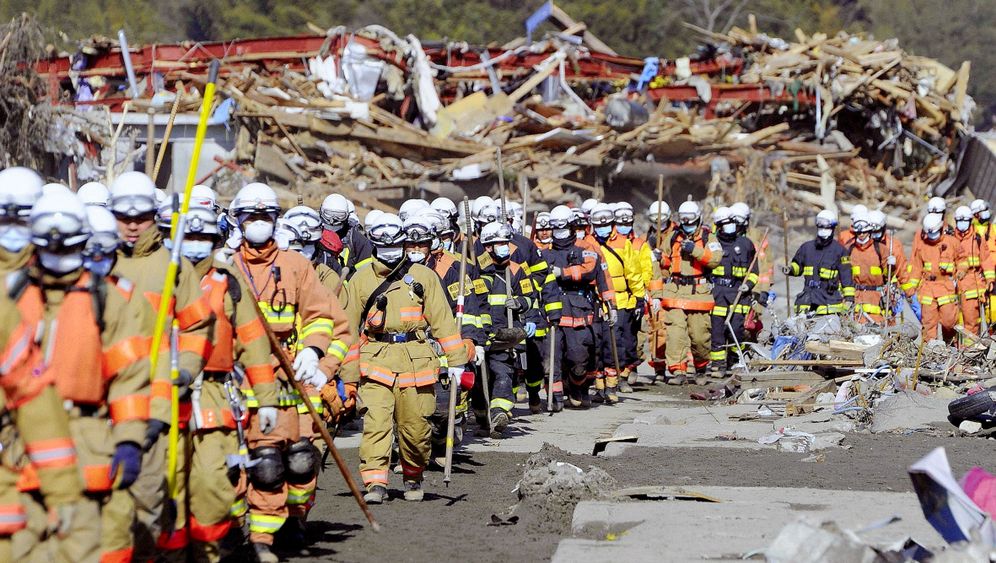 Photo gallery: A Nation at the Limits of its Resilience

The hand-written messages adorn pieces of paper, boards and walls. There are hundreds or even thousands of them, hanging in the hallways of evacuation centers in Sendai, Natori and all the other devastated cities along the coastline of northeastern Japan.

They are written by people desperately trying to figure out if their loved ones are still alive. "I'm looking for Ichiro and Sumie Aizawa, 83 and 79. They were in the store when the earthquake struck," says one. Another reads: "I'll come back tomorrow to meet you. At 8 a.m. Please be here!" High-tech Japan hasn't witnessed such a flood of handwritten cries for help since World War II bombs devastated Japanese cities.

Occasionally you'll find messages tinged with both hope and despair. "A heater is on in the hall of the construction company," says one. "It is warm there." And sometimes, though rarely, the messages attest to the good fortune of survivors. "Yurika and her sister aren't hurt" is written in black felt-tip pen on a whiteboard in Sendai. "Everyone is alive!" stands right next to it.

Roughly one week after the disastrous earthquake and equally devastating tsunami, it's still impossible to give anywhere close to a precise estimate of the catastrophe's full scope. More than 450,000 people are homeless; almost 90,000 homes have been damaged. On Monday, the official number of missing had risen to 12,600, and 8,800 dead had been found.

While at least the Western media had moved its focus from the suffering of the Japanese to the threatening nuclear catastrophe, a second tragedy was playing out in the shadows of Fukushima. The highly industrialized country has been forced to a standstill. The disaster has paralyzed not only the devastated northern region facing the Pacific, but also the country's industrial base further south. It's almost as if the entire country has been forced to observe a moment of silence to honor the dead.

Japan at the Limits of its Resilience

When the flood waters retreated, they left behind a mess that has brought even this highly discipline and earthquake-tested nation to the limit of its resilience. It took rescue workers and soldiers days to make their way into some disaster-struck areas. Televisions around the world showed columns of soldiers and fire-rescue teams marching on foot through deserted oceans of rubble armed only with sticks. They attested to the helplessness of the helpers in this otherwise thoroughly organized state.

Early on in the rescue effort, the police, fire and military teams of rescuers and the foreigners who had come to help them started to find almost only corpses among the rubble of the devastated cities. Under normal circumstances, survivors can still be found days after an earthquake. But the tsunami, which was 10 meters (33 feet) high in places and rolled over Japan's northeastern coast only minutes after the earthquake struck, dashed almost all hope that the missing were still alive.

The soldiers of the 21st Infantry Regiment of the Japan Self-Defense Forces were deployed in the otherwise idyllic bay of Kamiashi. There, they had to recover the bodies of fishermen from the tops of spruce trees. They also found almost only dead bodies among the layers of debris left behind by the crushing force of the quake and the water. Most of the missing are likely to have been swept out to sea when the tsunami's waters retreated.

'The Worst Situation I've Ever Seen'

Klaus Buchmüller is an almost 20-year veteran of the Technische Hilfswerk (THW), Germany's federal emergency relief agency. Buchmüller has brought aid to places such as Afghanistan, the Congo and Iraq, and he arrived in Tokyo as the head of a THW team some 40 hours after the quake had struck. "This is the worst situation I've ever seen," he says, adding that no one was prepared to deal with an earthquake, tsunami and potential nuclear disaster at the same time. "If I would have presented this kind of scenario in a training exercise, people would have called me crazy."

The phone on Buchmüller's desk has been ringing nonstop for days. Some of the callers are also Europeans who are stuck in the catastrophe area and desperate to get out. Transportation has been limited, there are fuel shortages, and the streets are often blocked by mountains of debris. There has yet to be a complete evacuation of the emergency areas.

In these places, many are facing shortages of crucial necessities: food, water and warmth. Though famous for their toughness, even the Japanese are starting to show signs of stress. Mako Matsukawa survived the destruction of her hometown of Onagawa, a small coastal city in the hardest-hit Miyagi prefecture. The 19-year-old university student had taken refuge in a middle-school gymnasium, whose windows had been shattered by the earthquake.

Matsukawa says that it took two days before food arrived and that, even then, she only got half a bowl of soup. Later, she and her father descended the hill into the tsunami-destroyed city, which used to be home to almost 10,000 people. Now, the city was just pile after pile of debris. When night came, the survivors lit fires in ditches and roasted fish washed in by the tsunami.

Matsukawa believes that people here have reached the limit of their patience. "Even though many people tried to ensure that children and the elderly were the first to eat, in practice it was first come, first served. In the end I was lucky enough to get some food. But there were many people who got nothing."

After a while Matsukawa couldn't stand the city any longer. The streets stank of fish, and the people reeked of smoke. There were only makeshift toilets and crowds of people lined up in front of them.

In the end, she and her family made their way to Sendai, the hard-hit city with a million inhabitants. There, they finally found enough to eat. "In the evening, we ate warm rice," she says, "and I was filled with joy."

But food supplies are also tight in Sendai and the stores' shelves are empty. With little external help coming in, Mayor Emiko Okuyama could only appeal to the public spirit of her city's inhabitants in an address. "Until we reach the point where there is enough food and shelter, I ask you to share provisions a little bit more," she said.

In Ofunato, a city in the likewise devastated Iwate prefecture, Kimio Arai, 66, and his 86-year-old mother, Teru, are taking stock of the damage. What was once their house is now ruins. They are surrounded by chaos. They have no power, no heat, no Internet and no telephone service. To make matters worse, it has started snowing, and there was just another aftershock. But the two have decided to stay put.

"I don't think the government will help people like us," Kimio said, "at least we still have the remains of our house." He has yet to receive any help from the government. The only help they've had is food and drinks from neighbors who were lucky enough to not be hit so hard.

For now, Kimio and Teru are surviving on a diet which mostly consists of instant noodles and sweets brought by from neighbors willing to lend a hand. "We're worried about what the future might hold," Kimio says.

Japan Grinds to a Halt

Although the earthquake and the tsunami primarily ravaged the northeastern part of Japan, the industrial regions of the south did not escape unscathed. This is because Japanese companies are honed to implement the so-called "just-in-time" (JIT) production strategy, which tries to maximize supply-chain efficiency by minimizing the amount of time parts sit on shelves. But whenever there's a holdup in the delivery of new parts, the entire production process grinds to a sudden halt. For example, right after the catastrophe struck, Toyota had to send workers at its largest factories home because production had halted at parts suppliers in the north.

Likewise, Toshiba, which manufacturers roughly a third of certain kinds of high-end memory chips for digital devices, could no longer use its factory in the Iwate prefecture. Production has also been halted at six Sony plants in the Miyagi and Fukushima prefectures, one of which was completely flooded.

The devastated area in the northeastern part of the country has traditionally been one of the weakest in terms of infrastructure, and it only accounts for roughly 4 percent of Japan's total economic output. Images from the emergency shelters in Fukushima and Iwate show that is primarily the elderly, farmers and fishermen who lost their already meager livelihoods in the mostly rural region.

Still, it isn't just the destruction and danger of radioactive contamination that has brought the world's third-largest economy to its knees. The mere fact that there have been daily power shortages in the greater Tokyo metropolitan region, caused by having the nuclear power plants in Fukushima and elsewhere taken offline, has struck this high-tech nation at its core.

Indeed, Tokyo is suddenly no longer the city of our collective imagination. This power-gobbling urban organism usually has elevators and escalators that talk in simulated voices and robots that help the elderly take baths. But even days after the quake and tsunami, the city continues to be frozen in a state of collective shock.

Supermarkets have shut their doors, and the city's 16,000 traffic lights have been turned off. Thousands of trains, which bring an army of commuters into and out of the city every day, have been halted for days or hours at a time to save energy. Long lines of commuters wait outside of train stations for uniformed officials to shepherd them in groups to the platforms.

Land of the Setting Sun

Japan seems like a sumo wrestler who picked himself up off the ground, only to be knocked off his feet again.

In 2010, the country's economy enjoyed 2.8 percent growth, primarily thanks to demand from its booming neighbor China. But this pickup did little for many domestic consumers. After two decades of continuous crisis and sinking incomes, the ageing population is losing more and more hope.

Indeed, for now at least, this threefold catastrophe that began in the ocean just 32 kilometers (20 miles) from Sendai is transforming the old empire into the land of the setting sun.