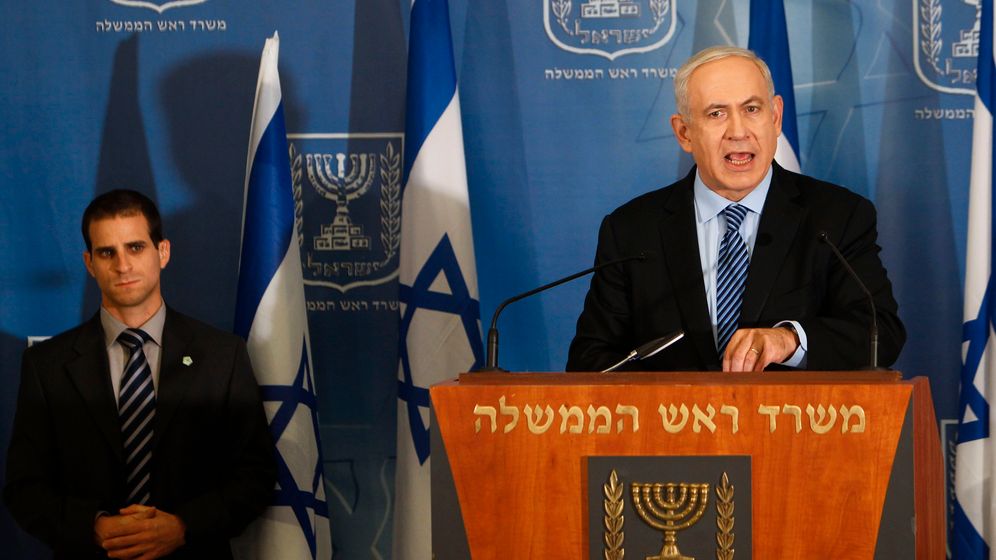 Just a few hours before the launch of the deadly offensive against military targets and Hamas leaders in the Gaza Strip, Israeli Prime Minister Benjamin Netanyahu was in his favorite place: in front of live television cameras. On Wednesday evening, he addressed the Israeli people with direct, aggressive words. "Today, we relayed a clear message to the Hamas organization and other terrorist organizations," he said. "If there is a need, the military is prepared to expand the operation." Defense Minister Ehud Barak also addressed reporters, saying that Hamas' "consistent provocation in recent weeks … forced our hand into acting with both precision and decisiveness."

The dual appearance seems to betray the motives behind the most recent attacks. "When the cannons roar, we see only Netanyahu and Barak on the screen, and all the other politicians have to applaud them," wrote the daily Haaretz in a commentary published Thursday. "The assassination of (Hamas' top military commander Ahmed) Jabari will go down in history as another showy military action initiated by an outgoing government on the eve of an election."

Indeed, one can conclude that the most recent offensive against militants in the Hamas-ruled Gaza Strip -- which started Wednesday with the killing of Jabari -- has been conceived as more of a show fight for the Israeli public than the beginning of a decisive battle.

Both Netanyahu and Barak would have good reasons for wanting to use a successful mini-campaign to score points before parliamentary elections are held on Jan. 22. Netanyahu is undoubtedly afraid that ex-Prime Minister Ehud Olmert could snatch votes away from his Likud party if he decides to throw his hat in the ring. In fact, there are rumors that Olmert was planning to announce his candidacy precisely on Wednesday evening. But the military action codenamed "Pillar of Defense" upset his plans.

Defense Minister Barak can also no longer assume that his "Independence" party, which broke off from the Labor Party in January 2011, will win enough votes to keep seats in the country's parliament, the Knesset. However, a successful offensive could boost its waning popularity enough to guarantee it some parliamentary seats. An offensive that gets the population to close ranks behind the military would also divert attention away from pressing social problems in Israel. Doing so would take the wind out of the sails of groups such as the Labor Party and cost them votes, thereby helping Netanyahu's and Barak's respective parties.

Still, even if the offensive might give the two some political advantages, it also entails massive risks. If the violence gets out of hand and the conflict between Israel and Hamas escalates into something like the three-week war that broke out between the two in December 2008, it could have drastic consequences for the men who orchestrated it.

The Israeli public is extremely sensitive to casualties. Sentiments could swiftly turn in the event of a few more of incidents like the Thursday attack that saw a rocket slam into an apartment building in the southern Israeli town of Kiryat Malachi, killing two men and a woman. Likewise, should the Israeli government respond to a constant barrage of rockets launched from the Gaza Strip by ordering ground troops to advance into the coastal area, it could spell even more casualties and even more public opposition to the leaders who launched "Pillar of Defense."

A Dangerous Balancing Act on Both Sides

Netanyahu's government hopes the offensive will usher in the status quo ante. Israel would like to re-establish the cease-fire that it hammered out with Hamas in January 2009, at the end of the war in Gaza. Though it was a fragile peace, for the most part, it was respected. But Hamas has been emboldened by the recent election victory in Egypt of the Muslim Brotherhood, Hamas' political parent organization. Just a few months ago, Hamas started to seriously jeopardize the peace by beginning to launch rockets into Israeli territory and attacking Israeli border patrols.

Internal political calculus was also behind the Palestinians' decision to increase the number of attacks during the late summer: Hamas' power base is crumbling. Many Gaza Strip residents believe the organization is too weak and view the cease-fire with Israel as a betrayal. In recent years, the support of these disenchanted residents has migrated to considerably more radical groups. By making itself appear more bellicose, Hamas hopes to win back these former supporters.

Indeed, more than anything, it is the presence of these ultra-radical groups in the Gaza Strip that could turn Israel's current offensive into an adventure that spirals out of control. Goaded by Israeli airstrikes and shelling from tanks and naval gunboats, these extremists will be even less inclined to agree to a new cease-fire. Their supporters expect them to take a tough stance and reject all compromises.

These groups are affiliated with terror cells based in the Sinai Peninsula, and some of them have ties to al-Qaida. In the past, they have already blocked the attempts of Egyptian intermediaries to broker a cease-fire. In the days to come, Israel could face a situation in which Hamas becomes incapable of imposing one even if it wants to.

Should that happen, the Israeli government would have no choice but to take over the entire Gaza Strip. However, doing so could weaken Hamas so much that the ultra-extremist Palestinian groups could simply push it aside.

For this reason, it is paradoxically in Israel's interest not to allow the ongoing offensive to severely batter Hamas and thereby imperil its grip on power.

Netanyahu and Barak are now walking a perilous tightrope -- and one of their own making.