A mixed mood of sadness and hope permeated the atmosphere at a birthday party thrown in the northern Israeli village of Mizpe Hila. Last week, Noam and Aviva Shalit wished their son Gilad a happy birthday, but they apologized in a silent prayer that they hadn't yet succeeded in securing his release from the arms of his hostage-takers and also expressed their hope that it would be his final birthday in captivity. The young soldier is still in the hands of Hamas, whose footsoldiers kidnapped him in June 2006 along the Gaza Strip border.

Since last week, though, there have been grounds for hope about the foreseeable release of the corporal, which has been fostered by secret negotiations conducted by Germany's foreign intelligence agency, the BND.

For a short time now, the BND has conducted talks between the Israeli government and Hamas, with the goal of a new prisoner exchange -- Shalit for a few hundred Palestinian prisoners now sitting in Israeli prisons. As is always the case in the Middle East, the development has far greater significance than the fate of one soldier -- it has to do with the future of the region. An agreement with Hamas would clearly improve the prospects for a reactivation of a peace process that has come to a standstill.

A Qualified and Honest Mediator

The BND's difficult mission has been undertaken at the explicit request of the Israeli government. When it comes to the Middle East, the BND is considered both a qualified and honest mediator between the enemy camps. For more than 15 years, the Germans have had success in this area -- most recently between Hezbollah and Jerusalem. In July 2008, they secured a deal that saw the return of the bodies of two Israeli soldiers. And now German negotiators have been activated again. Since the end of July, a BND agent from Berlin has been shuttling back and forth between Europe and the Middle East -- between Tel Aviv, Cairo, Damascus and Berlin. The only thing that has changed this time are the negotiating partners. The German agent is now mediating between the new Israeli government of Prime Minister Benjamin Netanyahu and the Palestinian Hamas.

For the German government, the new mandate provides an opportunity to build its political influence in the region and to make itself indispensible as a political negotiating partner, but the mission is still fraught with risks. The BND traditionally has good relations with the Shiite Hezbollah ("God's Party") in Beirut, but it has hardly established any contact with Hamas. Up until now, the BND has not conducted any negotiations with the militant Palestinian group.

An additional complicating factor is that the Egyptian government is also active in the Shalit case, having offered to serve as a mediator shortly after the kidnapping. But the Egyptians have been unsuccessful in freeing the Israeli soldier and they are now lukewarm in their enthusiasm over the role assumed by the BND. Officially, Egyptian President Hosni Mubarak is still in charge, with the Egyptian secret service negotiating in parallel with the BND.

For a time this spring, it look like the enemy camps were close to reaching a deal, but then, suddenly, talks ground to a halt. Hamas was hoping to gain political cachet, and countries including France, Norway and Canada offered to serve as mediators for both side. In Netanyahu's view, all that international political attention could have been a political coup for Hamas and Israel wanted to avoid that at all costs.

The Israelis broke off talks and asked for help from Berlin. The German government has a reputation for not pursuing its own foreign policy agenda in the Middle East. And last Thursday, Netanyahu personally thanked German Chancellor Angela Merkel during his visit to Berlin for the support.

It would be difficult to overstate the kind of political success Shalit's release would be for Netanyahu. With an exchange of prisoners, he could also correct his hard-liner image. At the same time, he could trump his predecessor, Ehud Olmert, who negotiated fruitlessly for Shalit's release for almost three years.

Hamas itself urgently needs a success. Since the Israeli army's devastating bombing of the Gaza Strip last winter, displeasure over the Islamists has been growing amongst the Palestinian population, and many believe they share responsibility for the lack of food and supplies the population has received. By securing the release of prisoners in Israeli custody, the Hamas leadership could stabilize its situation while at the same time strengthening its position against Fatah.

Thus, the opportunities for a breakthrough right now aren't bad -- and it's possible Hamas will agree to a new proposal forwarded by the BND, which the Israeli government has already agreed to in principle. It's a sort of road map in which the exchange would happen in several stages. After the release of the first group of Palestinians, Shalit would be taken to Cairo. Upon his arrival, the Israeli government would release a second group of detainees. Netanyahu is insisting that the group be released by his government as a humanitarian gesture, without any firm agreement for an exact date. In this manner, at least 450 Palestinians would be allowed to return home in the first stages, with more expected to follow later. Hamas political leader Khaled Mashaal has been given until the beginning of September to respond.

Since the Germans began their participation, Gilad Shalit's parents have been full of optimism again, and they hope things will move quickly. Noam Shalit is acting on the side of caution right now, too -- he recently rejected an invitation to attend a meeting in Germany at the end of September with supporters who want to express solidarity with his kidnapped son.

"At a time like this, I think it is best for me to stay in Israel," he told SPIEGEL. 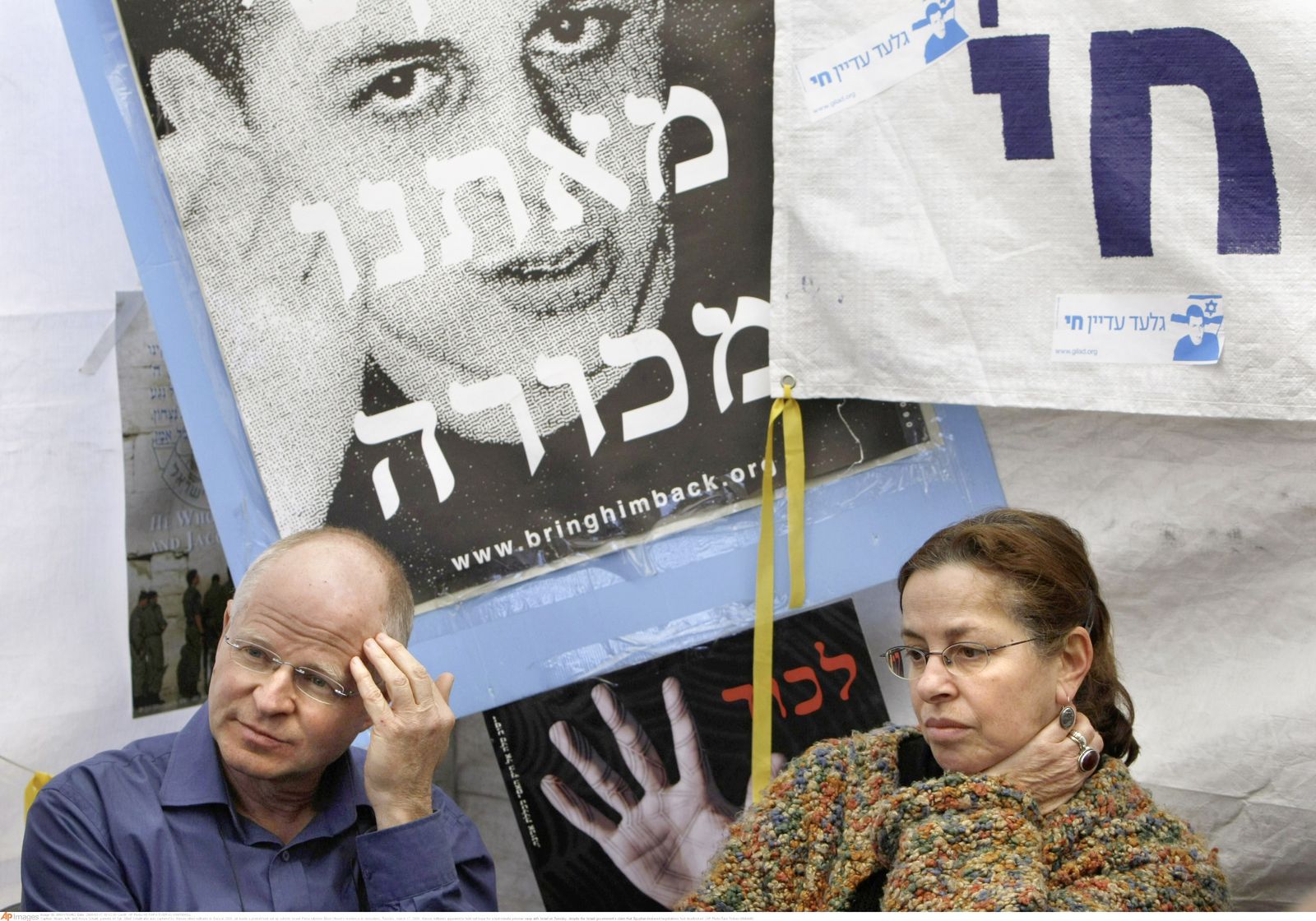 Noam and Aviva Shalit, the parents of Gilad Schalit, recently held a silent prayer for their kidnapped son.