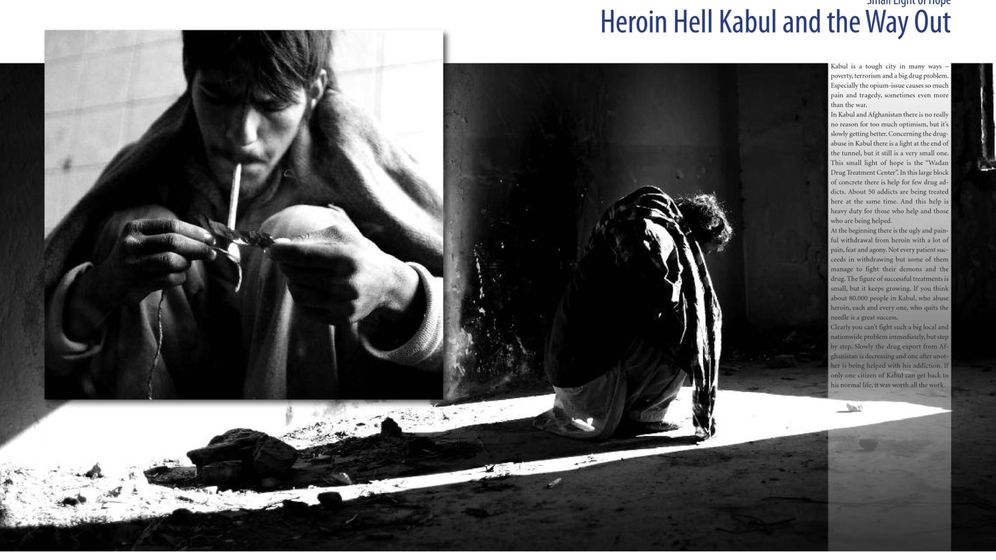 Photo Gallery: In Flight, In Your Face

SPIEGEL ONLINE: Drug addicts, dog fighting and sightseeing trips to war-torn ruins -- reading the in-flight magazine onboard a Safi Airways flight to Kabul might make you want to immediately turn back for home. Has your employer ever complained?

Marks: No, he's completely satisfied. People who fly with Safi Airways to Afghanistan aren't your typical tourists; mostly they work here. They're diplomats, aid workers or the employees of security companies. You don't have to pretend to them.

SPIEGEL ONLINE: You recommend that visitors to Afghanistan go and see the Darulaman Palace, but also write that it's been completely destroyed by bombing. Who would be interested in seeing that?

Marks: You can still see the palace. There aren't any mines there anymore! After 30 years of war, Kabul doesn't have many surviving tourist sights. The palace is fascinating; one king had under-floor heating installed there in the 1920s, while the rest of the country was still living in the Middle Ages.

SPIEGEL ONLINE: There are also articles in the in-flight magazine about dog fighting and the Frankfurt carnival. How do they fit together?

Marks: We try to find an interesting story from every country that Safi Airways flies to. Not just tourist sights, not just culture, but an exciting mix to really engage passengers. Some people are uneasy when they fly to Kabul and might not know what to expect. And dog fighting is massive in Afghanistan. You see men in pairs taking dogs for evening walks there -- one man on his own wouldn't be able to hold those animals. In the West only race horses are so carefully nurtured.

SPIEGEL ONLINE: Just like any other in-flight magazine, yours also covers fine hotels and chic bars. How exclusively can one live in Kabul?

Marks: You could go to the 'Atmosphère', a French restaurant, there's champagne and foie gras there. It's an old, reconstructed villa with WiFi and a pool in the garden. On weekends, the community of aid workers and UN people meet up there to chat. It's like an oasis. There are three security checks at the door.

SPIEGEL ONLINE: You're from Munich. What brought you to Afghanistan?

Marks: I worked with colleagues from Afghanistan on developing a radio show in 2005 for a World Bank project. The project was originally only supposed to last three months, but I found the country so fascinating that I kept extending my stay again and again and ended up living in Kabul for two years with my family. Since then I've returned several times.

SPIEGEL ONLINE: How did you come up with the idea of creating an honest in-flight magazine?

Marks: Originally I wanted to start a city magazine for foreigners living in Kabul. I could have done with something like that when I first arrived. I didn't know where I could go for dinner or which hotels were safe. My idea was to distribute the magazine on all flights from Dubai to Kabul. Then passengers have two and a half hours of reading time.

SPIEGEL ONLINE: How did you convince the airline?

Marks: Once on a Safi Airways flight from Kabul to Dubai I noticed a man in a suit jumping about and issuing orders. After we landed I asked him if he had anything to do with the airline. It was the CEO and president, a former Lufthansa captain. He thought my idea was great.

SPIEGEL ONLINE: In the magazine there are quite a few advertisements that stand out -- for companies that armor vehicles, for example, or outfit them with radios. Is business good?

Marks: It runs itself. I'm used to ringing round to drum up advertising from my work on my other magazines. But with the in-flight magazine, most adverts simply come in via email. If I don't respond quickly enough, they write to me again, telling me they are willing to pay the full price. Unlike in the West, it's normal here to get a discount on a quoted price.

SPIEGEL ONLINE: Next to some ads there are also matching articles, for example one about a physician service. Do companies also buy themselves coverage in the magazine?

Marks: Not necessarily. I just thought it was good what they were doing there, especially if you know how hard it is to get access to health care in Kabul. It's even more difficult outside of the city. The services on offer are miniscule!

SPIEGEL ONLINE: Seeing as it's going so well -- are you planning to expand into other crisis regions?

Marks: That wasn't the plan. But yes, a chain of magazines for airlines that fly into war zones would make sense. The advertisers are virtually identical. Actually, we could offer magazines for this special target audience all over the world.

SPIEGEL ONLINE: Kabul you know already, will Baghdad be your next stop?

Marks: I'm really lucky that as an author I can fly all over the place to write stories for the Safi magazine. I'm interested in many areas, including Baghdad.

9 Bilder Photo Gallery: In Flight, In Your Face