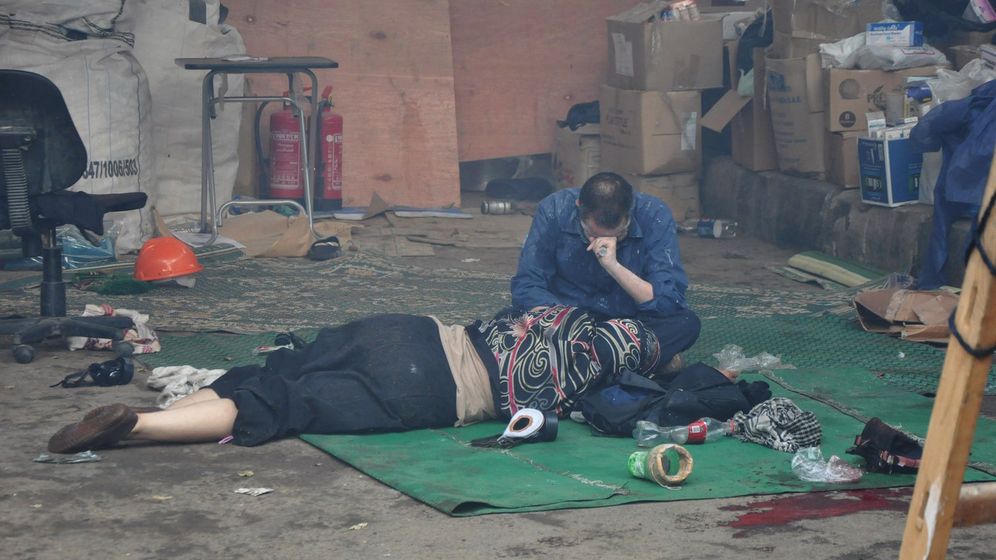 Photo Gallery: Bloodbath on the Streets of Cairo

Dr. Mohammed Abdelazim wants me to take a very close look at the dead: the man whose eyes burst out of their sockets when he was shot in the head; the man whose guts are piled up on his stomach in red loops; the man with a bandaged chin and empty eyes staring into nothingness.

"You must look at them," the doctor tells the foreigner, who would rather look away. "You are a witness. You must tell the world what is happening here. After all, no one believes us," says the doctor, in his bloodstained T-shirt.

It is Wednesday afternoon in the courtyard of the Mustafa Mahmoud Mosque, in a neighborhood in Gizeh, near Cairo. Dozens of men crowd around the ground floor of an administrative building, where the dead lie between office chairs and desks. Inside, the air conditioning is running at full blast, and still the air is filled with the stench of blood and fecal matter. An obese man is holding blue pieces of paper in his hand, which is balled into a fist. By his count, 19 dead have already been identified.

"Twelve have been taken away, and the others are being moved now," says the obese man, just as the crowd begins to chant "Allahu Akbar," or "God is great," parting to allow men carrying a body on their shoulders to reach the exit. The dead man is one of the victims of a massacre that many in Cairo, Egypt and around the world have feared would happen for days.

Since the Egyptian military leadership announced on Sunday that it intended to clear the two large protest camps where supporters of the Muslim Brotherhood were protesting the ouster of former President Mohammed Morsi, it was clear that the country was heading toward a new bloodbath. After the military coup in early June, the security forces had repeatedly demonstrated that they had no qualms about using deadly force against the Islamists' supporters. The bloody clashes that followed had already claimed 200 lives when, at dawn on Wednesday, the police advanced on the two tent cities filled with Muslim Brotherhood supporters.

By sundown, it was still completely unclear how many more victims had been added to the death toll on Wednesday. The Health Ministry estimated 149 dead, while the Muslim Brotherhood reported much higher casualty numbers during the course of the day, including up to 2,000 dead. By evening, the United Nations estimated that the day's events had claimed several hundred lives.

It is doubtful whether it will ever be clear how many people lost their lives on this bloodiest day in Egypt's recent history. During the course of the day, it became apparent that the two hostile camps in Egypt were reporting two diametrically opposed versions of the events. According to the army, the government it has installed and the media it controls, it was the supporters of the Muslim Brotherhood who, after their camps had been cleared, resisted the security forces with weapons, triggering the bloodshed. The Muslim Brotherhood, on the other hand, claims that the security forces mowed down two peaceful sit-ins, without concern for the loss of life, while soldiers fired at the crowd with tear gas, rubber bullets and live ammunition.

While the truth is somewhere in between, hardly anyone questions that the army and police are responsible for the most deaths. Their claim that they had fired in self-defense is precarious. Although there are images showing civilians with guns, the army has yet to prove that the Muslim Brotherhood supporters used firearms in a coordinated and large-scale manner.

It doesn't matter to the Egyptian media, which toes the government line and unquestioningly reports what the leadership tells it to report. The Muslim Brotherhood must rely on foreign media to portray its version of events, which is why its members insist that reporters look at the bodies.

The army leadership, supported by the overwhelming majority of Egyptians, had hoped to rid itself of a lingering problem by storming the protest camps. But the plan has failed, at least for now. Instead of going home, the Morsi supporters occupied other, smaller squares in Cairo. And now the police and military are dealing with many smaller protests instead of two large sit-ins. The protests are already spreading to other cities, as the violence threatens to engulf the whole country.

In the evening, about 4,000 Morsi supporters, after being driven away from their sit-in in front of the nearby University of Cairo, gathered in front of the Mustafa Mahmoud Mosque. The mosque is in Mohandessin, an upscale neighborhood oddly disfigured by the effects of the fighting. The treads of armored vehicles had torn up the asphalt in front of a store that sells Whirlpool products. Shell casings from AK-47 assault rifles, used by the Egyptian police, littered the ground outside a jewelry shop. Sidewalks were covered with glass from broken windowpanes, interspersed with drying pools of blood. Exhausted men and weeping women sat in the shade. Many prayed and were trying to brace themselves for the coming night.

"The army and the police will return when it gets dark," says Mahmoud Lutfi, who survived the fighting of the day by staying inside the high-end bath showroom where he works. The neighborhood's wealthy residents will certainly use their connections to prevent the Islamists from settling down in Mohandessin, says Lutfi, who identified himself as a Morsi supporter. "The war between the two Egypts begins tonight."