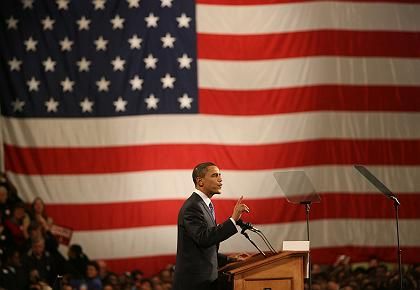 Barack Obama beat the Democratic field on Thursday in Iowa.

Children love fairy tales because they mix fantasy with reality. Little souls are warmed by age-old events recounted and embellished down the generations.

Adults, though, have the same lingering yearning for fairy tales. One of the modern fairy tales is called "Iowa."

It is told that in this small American state where the winters are always white and bitterly cold, the most powerful human being in the world is chosen every four years. After months of deliberation in living rooms and taverns, the new American president emerges on a crystal clear January night, the story goes. The people of America then formally confirm the choice of Iowa's citizens in an election later on.

It happened again last night. Some 250,000 voters in Iowa reached their decision and chose Barack Hussein Obama -- young, African-American visionary who represents Illinois in the US Senate. He presents himself as a mixture of Martin Luther King and John F. Kennedy. This January night is a "defining moment in history," he says. He pledges to be an "agent of change." After the bad years of President George W. Bush, many around the world are hoping that America will return to virtue and peace.

But the Iowa snow king has scant hope of reaching the White House. He's too young, too inexperienced, too vague, and for many Americans, too black. His magic words about the era of change, of hope, of an America he will unite -- all that will evaporate like morning mist.

The fact is that Obama is an unknown quantity. He sat in the US Senate for half a term without attracting any attention whatsoever. One intense speech at the Democratic convention in Boston in 2004, that was it.

Lovers of fairy tales may not want to hear it, but it's true nonetheless: As a rule, Iowa's vote applies to Iowa, not America. The winner in this small farming state rarely manages to get his party's nomination. Many US presidents have one thing in common -- they lost in Iowa. In fact, since the 1970s, Iowa caucus-goers have never, with the exception of George W. Bush, picked the candidatate who went on to become president.

Bill Clinton got a mere 3 percent here in 1992 because a popular local candidate stole the show. Ronald Reagan lost here to George Bush in 1980, but still made the White House. Two terms on, George Bush senior came third in Iowa but became president. Even Jimmy Carter's legendary victory in Iowa in 1976 (28 percent) is only legendary because the number of uncommitted votes (37 percent) has been forgotten.

The feelings of the folk of Iowa have been researched as meticulously as those of exotic jungle people. Everyone knows that the huge attention the Iowa caucus generates encourages Iowans to make an attention-grabbing, symbolic choice. Iowans are less confrontational than the average American, go to church more and have a penchant for the politically unusual.

Last night the Iowans didn't vote for a president -- they voted for a symbol to represent their unhappiness with the current state of America. Obama, like Republican winner Mike Huckabee, is like a blank sheet of paper on which they could project their disaffection.

After the cold years of war under Bush, both embody the dream of a better, warmer, different America. The Baptist preacher Huckabee and the former social worker Obama both represent reconciliation rather than division.

But both are likely to lose their magic soon. Huckabee is a genial provincial conservative who owes his success largely to the mediocrity of the other Republican contenders. Obama too will have a tough time living up to what his supporters expect of him. His insecurity and lack of experience quickly become evident whenever he ventures out of his nebulous rhetoric of change.

He would negotiate about peace with all the world's dictators, without preconditions, he said in a TV debate. He would like to bring the troops back from Iraq and turn the focus of military and CIA activity on Pakistan. That's the war we need to win, he says.

He doesn't have much to say about Europe. He has never been to the continent that shaped America like no other. The hero of Iowa is a stranger, albeit a good-natured one. The similarity with Jimmy Carter is greater than he and his party can be comfortable with.

In domestic policy, he wants health insurance for all, but a voluntary one -- Hillary Clinton is campaigning for a mandatory one like in Europe. On economic policy, he makes the usual pledges about more jobs and lower taxes. He's skeptical about globalization, like a majority of Americans now.

His victory in Iowa isn't insignificant, though. Sometimes symbols blaze the trail for reality. Mahatma Ghandi with his flowery rhetoric ushered in the end of British colonial rule in India. German Chancellor Willy Brandt promoted Cold War détente in 1970 by falling to his knees in front of a memorial to the Warsaw Uprising.

And in America it was the African American civil rights activist Rosa Parks who refused to obey a bus driver's order that she give up her seat for a white passenger in 1955. Her action culminated in demonstrations by hundreds of thousands of African-Americans, in Martin Luther King's "I Have a Dream" speech, and ended up shaping modern America.

The fairy tale of Iowa relates to the real world. Obama embodies America's yearning for political reconciliation at home and abroad. Americans are tired of the current administration's aggressive rhetoric. They want reconciliation, not war. They want a harmonious society, not a divided one.

The most fascinating thing about Obama is the effect he has on people. The 46-year-old Senator has whipped up enthusiasm about politics among people who until recently were jaded and deeply suspicious of politicians. Even the most cool-headed analysts have noticed that he touches people's hearts. In Iowa's capital Des Moines young girls spent $30 on having their finger nails varnished with the initials of their idol.

On the plane to Iowa the young librarian sitting next to me could no longer contain her enthusiasm for Obama. She said it was amazing what he was doing to America.

Yesterday morning in my hotel, at the breakfast table next to mine, two sisters, perhaps six and eight years old, greeted each other with the following exchange. "Are you fired up?" said one. "Are you ready to go?" replied the other. That's the battle cry of Obama's supporters. Children love fairy tales.