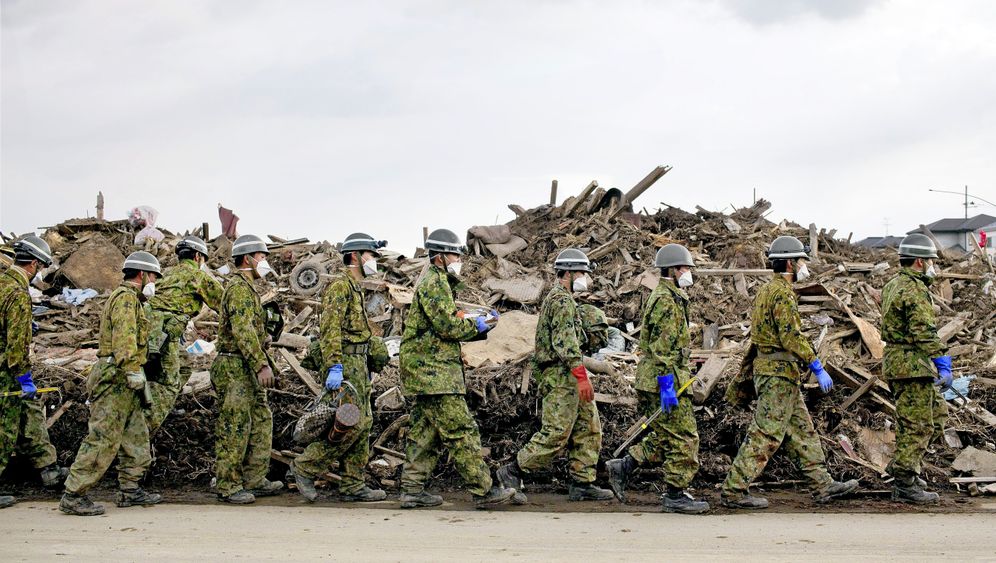 For three weeks, the man who is expected to save the country stopped wearing suits, preferring instead to appear in public in freshly starched blue overalls. Even today, the hands he used to open widely like a preacher during speeches can often be seen clenched into fists. His smile has disappeared, and the more grimly determined he looks as he gazes into the television cameras, the more anxious his fellow Japanese become about the future.

Naoto Kan, 64, is Japan's fifth prime minister in five years. He is also just the fifth prime minister since 1955 who is not a member of the powerful Liberal Democratic Party (LDP), which has been in power for most of its 54 years in existence. But Japan is unlikely to forget Kan, as they have many of his predecessors.

If it hadn't been for the disaster in Fukushima, Kan would probably no longer be in office. On the morning of March 11, he was forced to admit before parliament that he had accepted illegal political donations. But that afternoon, a powerful earthquake struck northeastern Japan. The ensuing tsunami flushed a crisis of overwhelming proportions into Kan's court, providing him with a second chance as a politician.

The only problem is that Naoto Kan has remained Naoto Kan, a type of politician whose leadership style doesn't seem right for Japan.

Kan is trying to govern Japan with the top-down leadership style of an American president. In June 2010, he campaigned on a platform of "resurrecting a powerful Japan." He told his people that he intended to double the sales tax rate to rein in the country's massive debt.

The results of his announcements were soon apparent. His Democratic Party of Japan (DPJ) promptly lost its majority in the July 2010 election for the upper house of the Japanese legislature, and Kan became a "lame duck."

Then Fukushima happened, and now Kan is trying to do everything right. But instead of using Japanese role models to approach the crisis, he seems to be doing everything he can to avoid the humiliation that then US President George W. Bush suffered after Hurricane Katrina in 2005.

On the morning after the tsunami, Kan donned Japanese military fatigues, boarded a military helicopter and was flown over the devastated northeast Japanese coast to the stricken Fukushima nuclear power plant.

He was photographed gazing seriously and silently out of the helicopter, seemingly mimicking statesmen in the West. For many of his fellow Japanese, the photo disqualified Kan as a crisis manager.

The opposition and most Japanese media organizations accuse the prime minister of having delivered a pathetic and thoroughly un-Japanese solo "performance," a word so alien to the island people that there is no equivalent in Japanese, except the Japanese version of the English word: "pafoomansu."

In a country where everyone learns from an early age to be modest and conform, Kan's performance violated social norms. He was even accused of having hindered efforts to save the nuclear power plant with his helicopter outing. To protect the premier from radiation, the plant's operator, the Tokyo Electric Power Company (TEPCO), allegedly postponed a steam release from one of the overheated reactors -- far too long, say critics, to prevent the explosion that destroyed the building surrounding Reactor Unit 1 soon afterwards.

A Metaphor of Crisis

Kan rejected such criticism in a speech to the Japanese parliament last Thursday. But words fade away, while the photo of Kan sitting in a helicopter endures. For many Japanese, it depicts a politician who is jeopardizing the enormous national effort by diverting energy into Western-style political theater. Kan's photo became, as it were, the metaphor of a natural disaster that is growing into a political crisis. All the while, Japan's citizens, used to a highly regulated, high-tech environment, are forced to look on as radioactivity from Fukushima continues to spread -- radioactivity which will likely be around for years to come.

The Japanese have, however, been impressed by the desperate battle being waged by the more than 400 technicians and workers on the grounds of the stricken nuclear facility. They admire the dedication of the roughly 100,000 soldiers working in the areas devastated by the tsunami. The members of the country's military, known as the Japan Self-Defense Forces, had never been particularly popular among their fellow Japanese. With its pacifist constitution of 1946, the country had fundamentally distanced itself from anything that was even remotely related to war and the military.

But now the soldiers are bringing food to towns and villages where private truck drivers no longer dare to go. They are building temporary bathing facilities where local residents living in the often unheated emergency shelters can bathe and warm themselves. And they are searching for the dead and burying the bodies with as much dignity as possible under the conditions.

Compared with these heroes, the crisis managers in Tokyo often look like failures. Although they are keeping up appearances, which includes bowing and begging for forgiveness, it is impossible to ignore their many mistakes.

If there is a second face to Japan's crisis of confidence, in addition to Prime Minister Kan, it is that of Masataka Shimizu, 66. The president of TEPCO has only appeared before the press once since the beginning of the reactor disaster, and then it was already 29 hours after the first explosion. During that press conference, he did not address the reactor disaster itself or the organizational chaos at TEPCO.

After that, the head of TEPCO disappeared for a few days, leading to media speculation that he might have committed suicide. In the end, TEPCO sheepishly admitted that Shimizu was ill. When he checked into a hospital last Wednesday, the company issued a statement saying that he suffered from high blood pressure and dizzy spells.

Perhaps Shimizu is truly ill. But he has come to symbolize an elite of Japanese business leaders and bureaucrats who would prefer to see their premier continue fighting the fight on his own, like some lone general on a hill.

The bureaucracy, after all, has a score to settle with Kan and his Democratic Party. In the fall of 2009, after the DPJ had unseated the LDP, the new government announced that it intended to implement a new style of "political leadership."

Until then, politicians had left the business of governing up to the bureaucrats. Japan had developed into a country that more or less functioned on autopilot, with the politicians merely dictating the general direction. But now Kan's party had begun to meddle in details considered by the bureaucrats to be their affairs. Even worse, they began to question the bureaucrats' privileges. They did away with, for example, a practice that had allowed retiring civil servants to switch to lucrative positions with companies fully or partly owned by the government -- a move known as a descent from heaven (amakudari).

The bureaucracy retaliated by blocking the new administration where it could, and by publicizing one political donation scandal after another. Instead of reforming Japan, the leaders of the DPJ constantly had to defend themselves against new accusations that they were mixing up "money and politics."

Fukushima has made such conflicts visible to the world public -- and made clear the degree to which crisis managers in Tokyo are getting in each others' way: Mr. Kan and his spokesman, Yukio Edano, who are determined to lead, and TEPCO, the electric utility that is now out of its depth. These two, in turn, are struggling against a bureaucracy that, though weakened, is still strong enough that it does not have to cooperate unconditionally.

With each press conference, it is becoming clearer how the various crisis management teams are competing for competency. It is always the same bizarre ritual, in which one piece of information contradicts another. Only the order changes here and there. Sometimes government spokesman Edano appears first, wearing a light-blue disaster relief uniform, and sometimes it is the TEPCO executives in their dark blue uniforms. Sometimes the spokesman of the Nuclear and Industrial Safety Agency (NISA) is the first to stride to the podium, wearing a white uniform with blue stripes on the shoulders, and sometimes it is the representatives of the Nuclear Safety Commission of Japan (NSC), recognizable by their bright yellow uniforms.

Perhaps Kan should simply leave the job of managing the crisis up to his bureaucrats, as former Prime Minister Tomiichi Murayama did after the 1995 Kobe earthquake. But on March 15, the fifth day of the disaster, Kan did precisely the opposite. He tried to make Fukushima his top priority.

At 6:30 a.m., he was driven to TEPCO headquarters in his black official limousine. Sitting exhausted on the back seat, he watched Tokyo's empty streets pass by. He was tired of sitting in his office and doing nothing.

Kan took the TEPCO executives to task for more than three hours. "What exactly is wrong here?" he shouted. "A withdrawal from the plant is out of the question. You are our only hope!" He was trying to break through the thick walls separating the institutions that have developed over the decades in Japan -- and long prevented them from acting effectively in Fukushima. Kan had also expected to encounter such great resistance from the executives that he threatened to allow TEPCO to fail.

By now, of course, such a demise has become a foregone conclusion. The company could face damage claims estimated at up to 10 trillion yen (about €85 billion, or $121 billion). TEPCO, which would never be able to come up with even a fraction of that money, will likely be nationalized.

The Japanese are now almost as critical of Kan's angry performance at TEPCO as they are of his helicopter flight. The premier had apparently expected to achieve the same results he achieved with similar means 15 years ago. Then health minister, Kan cleared up a scandal surrounding banked blood contaminated with HIV. He shouted at his officials for so long that they eventually pulled out documents from the archives that revealed their department's partial culpability.

At the time, the Japanese still reverently referred to him as "Ira-Kan," or "the irritable Kan." In the current crisis, however, he comes across as someone whose nerves are wearing thin and who is depriving his underlings of their motivation. It is perhaps not coincidental that TEPCO CEO Shimizu called in sick on the day after Kan's lecture.

Kan also knows that he cannot cope with the crisis alone, and he recently proposed forming a grand coalition with the opposition Liberal Democrats. The step shouldn't pose a problem politically. The two parties are ideologically very similar. Kan offered opposition leader Sadakazu Tanigaki, 66, the office of vice-premier and minister of disaster protection. But the LDP leader, who has also taken to appearing before the press in a blue crisis uniform, turned down the offer at first.

This refusal to take responsibility doesn't sit well with the Japanese. The fact that the world even trusts the country anymore, writes the newspaper Mainichi, is solely due to the efforts of the population, companies and the affected communities. "Instead of parading around in crisis uniforms," writes the paper, the politicians should finally produce results."

Meanwhile, Emperor Akihito, 77, is giving comfort to the island nation -- not with grand words but with modest gestures. Last Wednesday, he and Empress Michiko, 76, visited survivors from Fukushima Prefecture at an emergency shelter in Tokyo. Like Prime Minister Kan, he too could have flown over the disaster zone in a helicopter. Instead the Tenno, or "heavenly sovereign," whose father was forced to renounce his claim to divinity in 1946, knelt on the ground in front of the people sitting on the floor so as to be at eye level with the victims.