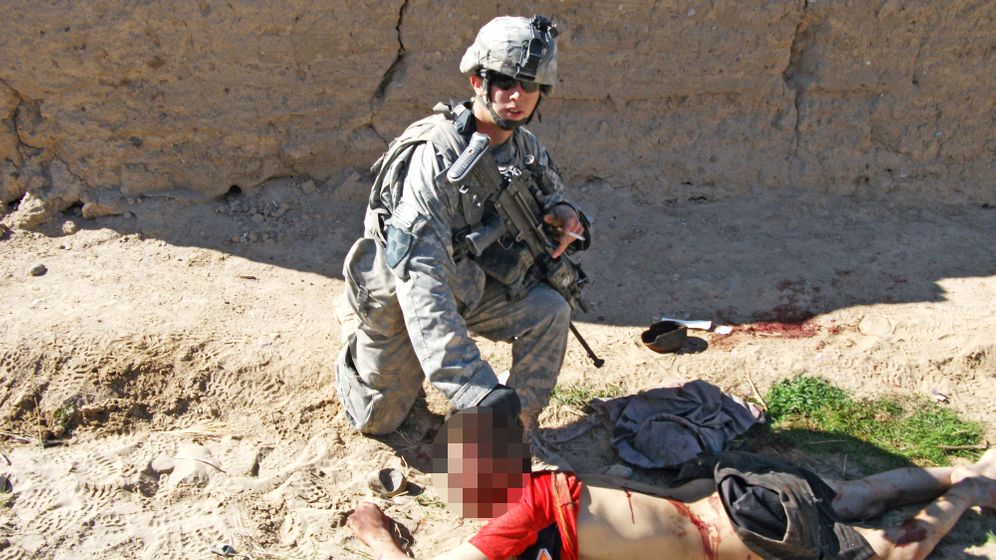 The United States and NATO are concerned that reactions could be intense to the publication of images documenting killings committed by US soldiers in Afghanistan. The images appeared in the most recent edition of SPIEGEL, which hit the newsstands on Monday.

US Secretary of State Hillary Clinton has already telephoned with her Afghan counterpart to discuss the situation. National Security Advisor Tom Donilon has likewise made contact with officials in Kabul. The case threatens to strain already fragile US-Afghan relations at a time when the two countries are negotiating over the establishment of permanent US military bases in Afghanistan.

In a statement released by Colonel Thomas Collins, the US Army, which is currently preparing a court martial to try a total of 12 suspects in connection with the killings, apologized for the suffering the photos have caused. The actions depicted in the photos, the statement read, are "repugnant to us as human beings and contrary to the standards and values of the United States."

The suspected perpetrators are part of a group of US soldiers accused of several killings. Their court martials are expected to start soon. The photos, the army statement said, stand "in stark contrast to the discipline, professionalism and respect that have characterized our soldiers' performance during nearly 10 years of sustained operations."

At NATO headquarters, there are fears that the coming days could see angry protests in Afghanistan or even potential attacks against NATO units. "The images have an enormous potential here in Afghanistan," one NATO general told SPIEGEL ONLINE. "Experience shows that it might take a couple of days, but then people's anger will be vented."

NATO, under the leadership of the US Army, has been preparing for possible publication of the photos for close to 100 days. In dozens of high-level talks with their Afghan partners, military leaders have sought to pursue the same strategy used by the US diplomatic corps in the case of the sensitive diplomatic cables released late last year by WikiLeaks. They warned those most directly affected and made preparations for the photos' appearance in the public sphere. This "strategic communication" was aimed at preventing a major public backlash.

The high ranks of those involved in the talks show just how seriously Washington has taken the problem. US Vice President Joe Biden recently spoke about the case with Afghan President Hamid Karzai. The head of all NATO troops in Afghanistan, General David Petraeus, likewise met with Karzai.

By apologizing and by promising that those responsible will be prosecuted, the US is hoping to prevent Karzai from making any angry public statements on the case.

Whether the effort will ultimately be successful remains to be seen. On Tuesday, Karzai is scheduled to address his country to talk about the transfer of responsibility for his country's security from NATO to Afghanistan. With him will be members of the NATO leadership and the US ambassador to Afghanistan. Karzai's address contains no mention of the so-called "kill team," but the Afghan president is notorious for being unpredictable.

Political Conflict with the US

Observers say the fact that there hasn't been any serious reaction or demonstrations so far doesn't mean the danger has passed. One fact could be that Monday is a holiday in Afghanistan. A high-ranking official in the Afghan Foreign Ministry, who is close to President Karzai, said he believed the development would trigger a serious political conflict with the US.

"I assume we won't see the full effect of this matter until tomorrow, at the very soonest, when people return to work. Many people have Monday off," he told SPIEGEL ONLINE. He said the incidents had been "too outrageous" not to spark protests. "That this is engaging people can be seen by the fact that it is already being discussed on the Internet," he added.

In neighboring Pakistan, where relations with the United States are likewise strained, officials are also watching the matter closely. "We are acknowledging it, but for now it is a matter for the Afghan government to make any charges," a spokeswoman for the Foreign Ministry in Islamabad said. The release of CIA employee Raymond Davis, who shot two men at the end of January and was let go after paying blood money, as well as the increase in US drone attacks in the western part of the country, triggered angry protests in Pakistan.

The SPIEGEL story printed on Monday includes new details about a series of murders of innocent Afghans committed by a group of US soldiers. One of the accused, Corporal Jeremy Morlock, 22, confessed to the murders three months ago. Morlock is scheduled to face a general court-martial on Thursday. In total, 12 US soldiers who were allegedly part of what has been described as a "kill team" in Afghanistan are expected to go on trial soon.

'They Mowed Him Down'

The piece in SPIEGEL reconstructs some of the atrocities and includes three previously unknown photographs. Among other things, they show two of the suspected killers posing next to a corpse. The victim in the image is Gul Mudin, an Afghan man killed on Jan. 15, 2010 in the village of La Mohammed Kalay. In total, SPIEGEL and SPIEGEL TV has obtained a significant number of photos and videos.

The suspects are accused of having killed civilians for no reason and then of trying to make it look as though the killings had been acts of self-defense. Some of the accused have said the acts had been tightly scripted.

In one incident, which has been reconstructed based on documents from the investigation, the soldiers themselves detonate a hand grenade in order to make it look like they were the subjects of an attack before killing a man. One of those who allegedly participated, Adam Winfield, 21, described the incident to his father in a chat on the social networking site Facebook. "They made it look like the guy threw a grenade at them and mowed him down," SPIEGEL quotes Winfield as having written in the chat.

In a second incident on Feb. 22, 2010, one of the members of the "kill team" who had been carrying an old Russian Kalashnikov, fired it before pulling out another gun and shooting 22-year-old Afghan Marach Agha. In a third incident on May 2, 2010, it appears that a hand grenade attack was again staged before the shooting and killing of Mullah Allah Dad.

The 12 men are also facing further charges of desecration of corpses, illegal possession of photos of corpses, drug abuse and acts of bodily injury against comrades.