For hours the sound of drums and exploding firecrackers has reverberated through the city of Udon Thani in northeastern Thailand, where the streets are filled with people dressed as dragons, ladies of the court and nobility, dancing and singing.

It's Dec. 5, and Thailand is celebrating the 81st birthday of its monarch, King Bhumibol Adulyadej. For once there are no demonstrations crippling the cities, no political murders, no airports or government buildings occupied by protestors. Thailand, a land of Buddhas and beaches, shaken by a severe political crisis, is taking a breather before the warring parties resume their struggle for power. In the second round, government supporters in the north, known as the "Reds," are determined not to allow themselves to be forced onto the defensive by monarchists in Bangkok, or "Yellows."

On the evening before his birthday, the king was scheduled to give a traditional television address to his people. The speech has rarely been as feverishly anticipated as it was this year. But Bhumibol remained silent. The king was "somewhat ill," Princess Maha Chakra Siringhorn said in a radio address, explaining that he "had a sore throat and pain at the top of his esophagus." It was the first time that Bhumibol did not give his birthday address since 1946, when he was crowned as King Rama IX. It was not a good sign.

The Thais had had great expectations for his speech. Both parties worship Bhumibol as a practically godlike figure, and he is the only person believed to be capable of reconciling the country's hostile political camps. A few words from Bhumibol may have been sufficient to ease tensions in the current situation. Now, with the country facing a possible escalation of the conflict, Thais are wondering why their king has said nothing.

The bitter struggle for power has raged for weeks. Members of the middle-class opposition, the power elites in the Thai capital who despite having hired armed thugs to lend weight to their cause, call themselves the People's Alliance for Democracy, occupied the government headquarters building for four months and Bangkok's two main airports, the international Suvarnabhumi Airport and the domestic Don Mueang Airport, for more than a week. Up to 350,000 travelers were unable to leave the country because of the occupation.

In addition, bloody attacks shook the capital city of Bangkok almost daily. Bombs were detonated and political hooligans armed with grenade launchers and pistols fought in the streets. The violence has already claimed at least five lives and left dozens injured. The gangs of thugs were almost unopposed as they attacked each other with iron bars, wooden sticks and golf clubs.

A preliminary end to the violence came last week, when Thailand's Constitutional Court censured and banned the People's Power Party (PPP), in power since December 2007, as well as two of its coalition partners. Prime Minister Somchai Wongsawat was forced to resign. At that point, the protestors, who had been demonstrating in the yellow colors of the king, ended their siege of the two airports and celebrated the court's ruling as a victory.

But the judges' ruling did nothing to change the power struggle. Most of the PPP's members of parliament simply joined the Puea Thai, a party that was formed some time ago to absorb members of the PPP. They still retain a majority in the parliament and can now elect a new prime minister within 60 days. They are not expected to choose an opposition candidate.

The heated conflict exposes deep social and ideological cracks in Thai society, revealing how difficult it is to transform a Southeast Asian feudal society into a modern democracy.

The airport occupiers and their supporters are revolting against a democratically elected government whose political base consists of the poor rice farmers of northeastern Thailand. They are leading the fight for a middle-class minority with allegiance to the king and pro-military views, which calls itself the "revolution of the middle class." If it comes into power, it will do away with democracy and allow only one-third of the representatives of the people to be elected by the people. This comes as no surprise, given the fact the representatives of this segment of society lost the last four elections.

These "retro radicals," as the Zurich foreign policy think tank ISN has dubbed them, also believe it possible the royal family could support them in their crusade. But more and more Thais wonder what the king's silence means. Could it be a sign of division within the royal family? Queen Sirikit was once spotted at the funeral of a member of the opposition. The Reds, however, hope that the king himself is on their side -- that of the poor. 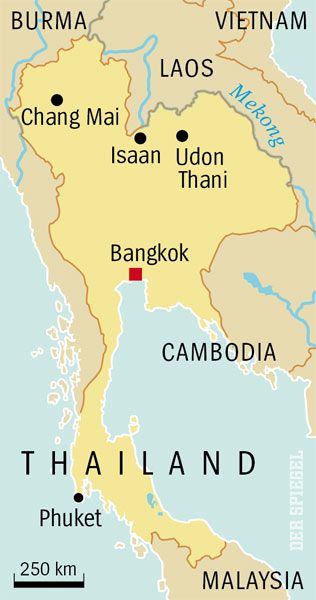 The Yellows are convinced that at least the military is on their side, but this time the military is apparently unwilling to stage a coup. Thailand experienced its 18th coup in 74 years in September 2006, when generals assumed power and drove then-Prime Minister Thaksin Shinawatra into exile. But once the officers restored democracy to the country, Thaksin's supporters returned to power. They had simply formed a new party.

Opinions are divided over Thaksin, a multimillionaire who was sentenced to two years in prison for corruption and is now believed to be living in Dubai. For Bangkok's established elites, the son of a family of Chinese silk and rice merchants is the devil incarnate. Thaksin, who comes from Chiang Mai in northern Thailand, is a brilliant and crafty businessman who made his fortune in the computer business and gained popularity with his television station, and he speaks the language of the poor.

But Thaksin is also responsible for serious human rights violations, which he accepted as a necessary evil in the government's war against drug dealers and Islamic separatists in the south. In addition, he apparently stretched the law to favor his own, shady business dealings. Nevertheless, he remains extremely popular among residents of Thailand's bitterly poor northern provinces.

Bangkok's bourgeois rebels argue that the region's rice farmers and day laborers should be stripped of their democratic right to vote because they are illiterate and easily manipulated. The leaders of the opposition, whose unbending protests almost brought the economy of this country of 64 million people to a standstill at times, say that the votes of the poor of northern Thailand have been bought and that they lack the appropriate political disposition.

In Isaan, Thailand's northeast, where Thaksin's party has scored reliable victories, different reasons for the public's support of the government come to light.

"Before Thaksin was elected, a dusty path led to our village," says rice and vegetable farmer Wat Chaiteh, 57, "but less than a year after he became prime minister, the first bulldozers arrived and built an asphalt road." There are 240 houses in his village, Ban Nong Bua, 13 kilometers (eight miles) west of the provincial capital Udon Thani and about 40 kilometers (25 miles) from the border to Laos.

During the harvest, he is in the fields by 5 a.m. every day to cultivate the four-and-a-half hectares (11 acres) his family owns. He also works as a day laborer on other farms or on construction sites in Bangkok. Nevertheless, he barely earns more than the equivalent of €120 ($155) a month. He counts himself fortunate that his children no longer live at home, and that they occasionally send money from the city.

The farmers' lives improved somewhat under Thaksin. The former prime minister introduced low-cost health insurance, had roads and schools built and scholarships set up, paving the way for the underprivileged to attend universities, sometimes even abroad.

Thanks to a microloan program, farmer Wat was able to borrow money. He would occasionally borrow €100 ($130), and sometimes slightly more. He invested the money in cattle and has since paid off the loans. He now fears that these achievements could be wiped out if the supposed Bangkok democrats come into power. "I am afraid," says Wat, "that we will lose everything."

"The opposition is lying when it claims that Thaksin bought all the votes of the people here," says Hong Thong, the host of a radio show on 97.5, a pro-government station in Udon Thani. "When we have elections here, all major parties show up and hand out a little money to the people. The people accept it, but then they vote as they please." Hong notes that there is no law that prohibits the government from building roads and promising the people improvements.

She fears that Thailand's devastatingly wide gap between the rich and the poor will only add fuel to the power struggle. "I don't know how long the people here in the northeast will continue to stand by as these yellow political gangsters in Bangkok simply take the law into their own hands."

Kwanchai Paipanna, an activist, is already preparing for the future. He's the leader of People Love Udon, a group of government supporters that stormed an event being held in Udon Thani by the People's Alliance for Democracy and beat up members. "We will form a people's militia," says Kwanchai. "We are already collecting money, and there will be many of us: at least 10,000 men."

Kwanchai plans to lead his militia in an assault on Bangkok, should the yellow insurgents make another play for power.