Former German Chancellor Gerhard Schröder, of course, had a head start. After being ousted from office in 2005 by Angela Merkel, Schröder immediately set to work penning his memoirs, a document called " Decisions: My Life in Politics" which, when it came out in 2006, was not particularly complimentary towards US President George W. Bush.

He said Bush used "almost Biblical semantics" and, in reference to the US president's repeated mentions of his faith, wrote: "The problem begins when the impression is created that political decisions are a result of this conversation with God."

On Tuesday, the day that Bush's own presidential memoirs, "Decision Points," finally hit the shelves, Schröder went even further. "The former American president is not telling the truth," he said on Tuesday in Berlin.

Schröder was referring to a passage in Bush's memoirs in which the former president described a meeting that took place between the two leaders in the White House on Jan. 31, 2002. Bush writes that, when he told Schröder that he would pursue diplomacy against Iraq but would use military force should the need arise, the German leader responded, "'What is true of Afghanistan is true of Iraq. Nations that sponsor terror must face consequences. If you make it fast and make it decisive, I will be with you.'"

Bush continued: "I took that as a statement of support. But when the German election arrived later that year, Schröder had a different take. He denounced the possibility of force against Iraq."

On Tuesday, Schröder offered his version of that meeting. "Just as I did during my subsequent meetings with the American president, I made it clear that, should Iraq ... prove to have provided protection and hospitality to al-Qaida fighters, Germany would reliably stand beside the US," the former German chancellor said. "This connection, however, as it became clear during 2002, was false and constructed."

Gerhard Schröder's opposition to Bush's aggressive Iraq policy was ultimately the deciding factor in his re-election in the autumn of 2002. Indeed, Germany joined Russia and France as the three most significant opponents to the US invasion. The ex-German chancellor has always insisted that his critical stance was not merely a campaign ploy. "How else could I have survived this campaign without exhibiting a clear position on this issue that meant so much to people," he wrote in his memoirs.

To be sure, Schröder's insistence of innocence is perhaps no less self-serving than Bush's own analysis of the run-up to the Iraq war. Schröder was the consummate politician and immediately recognized the political capital being handed to him by the German public's overwhelming rejection of the US course on Iraq.

Bush's memoirs, however, make it clear that he felt misled by Schröder. "I continued to work with Gerhard Schröder on areas of mutual interest," he writes in "Decision Points." "But as someone who valued personal diplomacy, I put a high premium on trust. Once that trust was violated, it was hard to have a constructive relationship again."

In the same passage, Bush makes it clear that Schröder wasn't the only one in Berlin who soured him on Germany. In 2002, then-Justice Minister Herta Däubler-Gmelin told a German newspaper, in reference to the White House's Iraq policies, that "Bush wants to distract people from his domestic difficulties. It is a popular method. Hitler did the same thing." She lost her job over the remark, but the ex-US president hasn't forgotten.

"I was shocked and furious," he writes. "It was hard to think of anything more insulting than being compared to Hitler by a German official."

Schröder isn't the only one this week to have cast doubt on the veracity of Bush's book. British officials have rejected the former president's assertion that waterboarding, an interrogation method considered to be torture, led to information which "helped break up plots to attack American diplomatic facilities abroad, Heathrow airport, and Canary Wharf in London, and multiple targets in the United States." The line is a reference to the interrogations of Khalid Sheikh Mohammed, the alleged mastermind behind the Sept. 11, 2001 terror attacks in the US.

On Tuesday, the Guardian reported that British counter-terrorism officials acknowledged that Mohammed provided valuable information on the structure of al-Qaida. They added, however, that the information is not known to have come as the result of torture.

Kim Howells, the former chair of the intelligence committee in the House of Commons, told the BBC that he doubted whether waterboarding played a role in the preventing al-Qaida attacks.

Bush has also admitted to having ordered waterboarding. "Damn right," he wrote. The admission, say many human rights lawyers, may expose him to charges for human rights violations. "George W. Bush has confessed to ordering waterboarding, which in the view of almost all experts clearly passes the severe pain threshold in the definition of torture in international law," human rights lawyer Geoffrey Robertson told the Guardian.

In his memoirs, Schröder too was critical of torture perpetrated by the US in the war on terror and at the Abu Ghraib prison in Iraq -- a further aspect to the enmity between the two. Indeed, the German-American ice age that began in 2002 only completely lifted when Chancellor Angela Merkel took the helm in Berlin in 2005.

Bush's memoir's aren't completely dismissive of the former German chancellor. Indeed, the former president goes out of his way to thank Schröder for "his leadership on Afghanistan" and for the fact that Schröder "generously offered to host" a meeting of Afghan leaders in Bonn in late 2001.

But Bush's book makes it clear that he still resents Schröder for ultimately being right about Iraq, a war which Schröder called "the mother of all misjudgements." In the end, Bush can't resist one final barb for Schröder. Writing about the Franco-German-Russian anti-Iraq war alliance, Bush said that then-Russian President Vladimir Putin demanded that, as a price for his opposition to the US invasion, Germany and France should desist from questioning his democratic credentials.

"At a G-8 dinner in St. Petersburg," Bush writes, "most of the leaders challenged Putin on his democratic record. (French President) Jacques Chirac did not."

He continues: "That was nothing compared to what Gerhard Schröder did. Shortly after the German chancellor stepped down from office, he became chairman of a company owned by Gazprom, Russia's state-owned energy giant."

Schröder so far has declined comment on the implied insult. 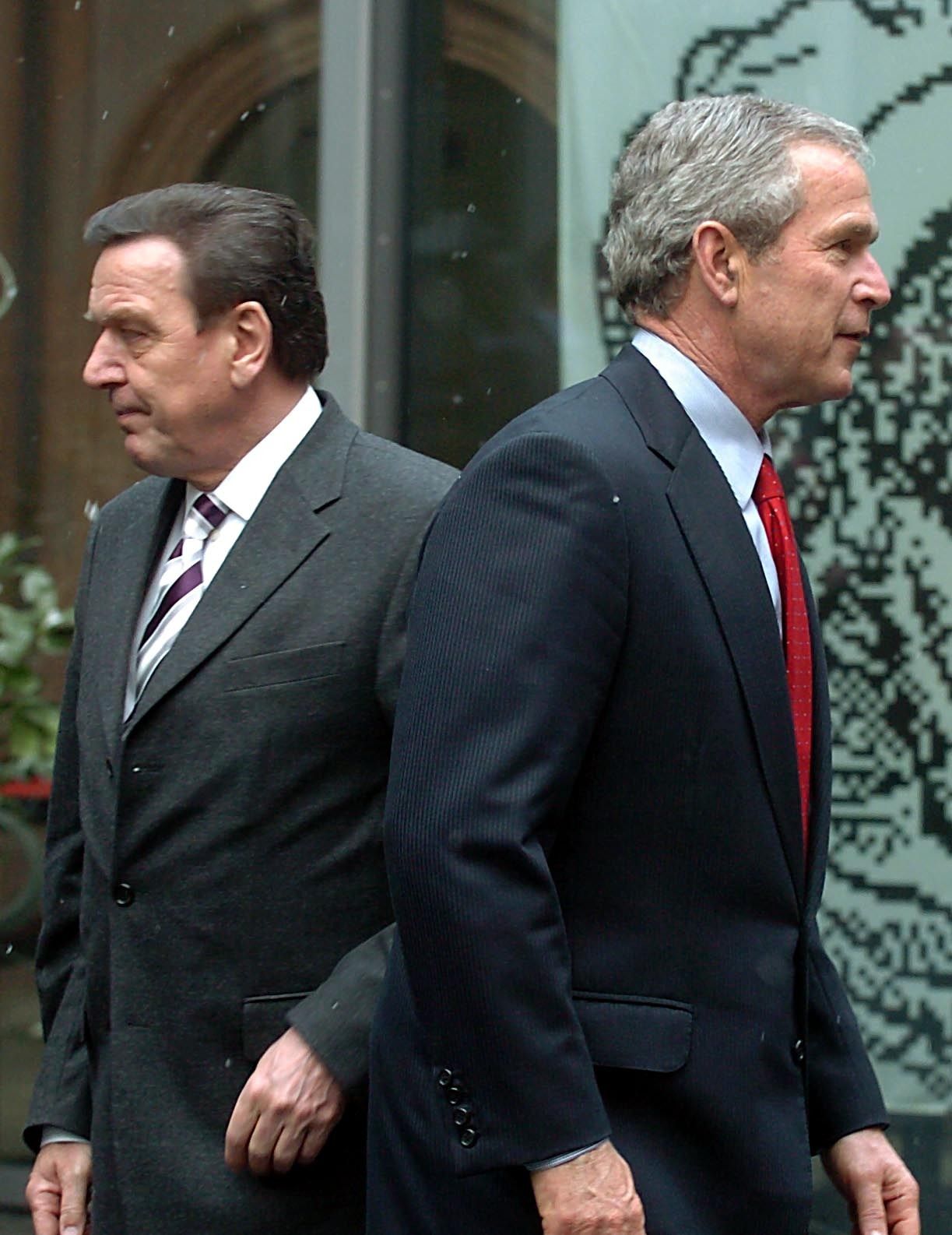 German Chancellor Gerhard Schröder and US President George W. Bush did not get along.