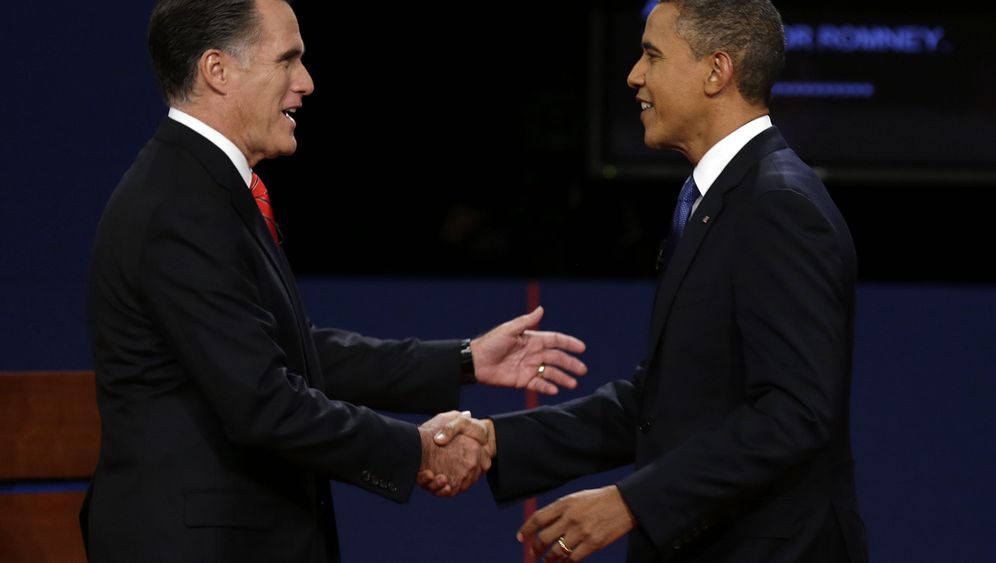 They sacrifice two years of their lives, spend upwards of $2.5 billion, wrap up thousands of appearances and utter hundreds of thousands of political statements. Sometimes, though, the fate of the candidates for the most powerful office in the world can be distilled into a single moment.

That happened in 1992 when George H. W. Bush seem to prefer to stare at his watch rather than take on Bill Clinton in a televised debate. That also proved true in 2000, when Democratic candidate Al Gore sighed arrogantly and loudly every time rival George W. Bush opened his mouth in front of the cameras.

And it was also the case at Wednesday night's debate with Republican candidate Mitt Romney, which showed US President Barack Obama staring at his shoes for all of America to see.

Obama seemed to stare repeatedly at the floor when challenger Romney began to give his answers. The world's most powerful communicator appeared to be oddly speechless on the biggest stage the election campaign has to offer -- a debate in front of 50 million TV viewers in the United States and 200 million around the world. Obama came across like a man who would rather have been watching basketball on TV at the White House or even authorizing new drone attacks. "Did the president send out his body double tonight?" wondered Time magazine.

In Denver, Obama was something of a Dud President. His weak showing could also have a negative effect on his candidacy.

Suddenly, there is a new dynamic to this campaign -- because small gestures can have a major impact if they confirm an existing impression among voters.

Even his close confidants have described the president as a man who is professorial and condescending -- a man not fond of being contradicted. Particularly not now, after four years in the White House during which he has encountered precious few contradictions. For a man with the self-confidence of Obama, it is a situation which can easily lead to a belief that he is the chosen one.

Obama Refuses to Put on Fight

It is an image that Obama confirmed in the Wednesday night debate in Denver, during which he showed little desire to defend his positions or to go on the offensive against his rival. Romney's past as an opportunistic investor, as a suspected tax dodger, as a candidate who behind closed doors dismissed 47 percent of Americans as welfare cases? Obama didn't address a single one of these issues. The president is just a gentleman, one of Obama's advisors unpersuasively argued after the debate.

The message served up to TV viewers seemed to be a different one: That voters should choose Obama because, well, he is Obama and he needs a little more time.

Such a strategy might work for a president with a stellar first-term report card. But that isn't the case for Obama. The US unemployment rate still stands at over 8 percent, unheard of by American standards. And the country's deficit continues to climb despite promises to shrink it. One-third of Americans live in homes that are worth less than the mortgages with which they are saddled.

The blame for these things, of course, cannot be placed on Obama alone. The dreary data is also the somber legacy of his predecessor, George W. Bush. It seems unlikely, however, that voters will make the distinction.

The only thing masking these figures for now is Obama's popularity. But with his sullen-faced appearance on the stage and Denver and, worse yet, his listlessness, Americans may well be reminded of Obama's modest achievements as a would-be conciliator in Washington. To be sure, the Republicans in Washington were bent on blocking anything Obama tried to push through. Still, in a new book, veteran US investigative reporter Bob Woodward has also meticulously described how poor Obama ultimately proved to be as a negotiator -- arrogant, passive and a loner.

Romney, for his part, has always had the economic data on his side, but never the popularity numbers. In recent weeks, he has even threatened to morph into the caricature of the candidate for the 1 percent of the wealthiest Americans. The Republican became one of the rare campaigners whose polling data deteriorated in states even after he had visited them to give stump speeches.

But on Wednesday, televised to the masses, Romney appeared like a human being for the first time -- a man who knows why he wants to get voted into the White House. That may not sound like a whole lot, but it could prove tremendously valuable for the Republicans.

In instant-reaction polls conducted during the debate, a large majority of Americans said they believed Romney to be the "stronger leader". Even on Obama's age-old pledge that he would break down party lines, Romney came across as more convincing because he could point to an aspect of his political career he often remains silent about: As the governor of Massachusetts, he managed to align himself with his former arch rival, Democratic icon Ted Kennedy, in order to push through a pioneering health care reform package.

Certainly, one shouldn't place the kind of value on debates the chattering classes in Washington are fond of doing. After all, Ronald Reagan suffered a crashing defeat in his first debate against Democratic challenger Walter Mondale, with the geriatric candidate even appearing to be disoriented. George W. Bush also took a drubbing from his rival John Kerry in their first debate. George H. W. Bush's vice president, Dan Quayle, took a lashing from his Democratic opponent when he sought to compare himself to John F. Kennedy. The audience laughed hysterically. Nevertheless, each of these debate losers came out a winner at the ballot box in November.

One can be certain that, when it comes to the next televised debate, Obama will not be staring at his shoes. And it is also clear that if Obama wants to secure a second term as president, it is running shoes that he will need -- and not slippers.