One ex-convict from Western Europe has applied to be locked up again, in Russia: He said he thought the space research mission in far-away Moscow was just the thing for him, since hes used to cramped spaces and isolation from his time in jail.

He and others have written to the European Space Agency (ESA), which together with Moscows Institute for Biomedical Problems (IBMP) wants volunteers for a new experiment testing mankinds limits for an eventual mission to Mars. Within the next three decades, Russia wants to be the first to send humans to the red planet.

In order to prepare for the arduous journey, four Russians and two people selected by ESA will participate in experiments to simulate long-distance space travel: They will be locked up in a model spacecraft for 520 days as human guinea pigs. No outside air and no daylight will penetrate the containers aluminum walls. In effect, it will be like the reality TV show Big Brother, only for science instead of cheap entertainment.

Some 5,000 men and women from 45 countries have applied so far. I see good chances especially for eastern Germans, since the participants have to speak fluent Russian as well as English, says ESA researcher Marc Heppener. The application deadline ends this month and finalists for the experiment starting in 2008 will be determined in December.

Sergey Ryazanski has already passed all the necessary medical and psychological tests. The athletic, blue-eyed, 32-year-old Russian is testing one of the wooden cots in the mock spacecrafts sleeping module. His grandfather helped build one of the very first Soviet rockets and two years ago he managed to graduate from Russias cosmonaut training program. A romantic attraction to outer space simply runs in the family blood. My wife was the only one who couldnt understand that, Sergey sighs. She divorced him. 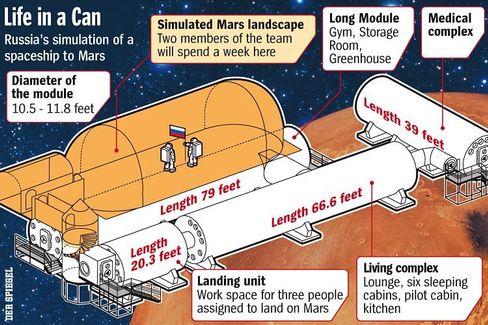 From his training, Ryazanski knows how extreme conditions can affect a persons psychological well-being. In total isolation with five people, youre burdened by five times as many problems, and so are the others, he says. Its exactly that sort of group dynamic that the IBMP wants to examine.

Eighteen cameras will record every move, every discussion and every argument of the earthbound spacecrafts occupants. Psychologists hope to pick candidates that will ensure the group works together as well as possible. A university degree in medicine, biology or engineering is a requirement.

Once the 20-centimeter thick airtight hatch has closed, the six would-be cosmonauts will have to rely on each other. They will have to repair things like defective filters on their own. Thats because the crew of a mission to Mars -- unlike the International Space Station (ISS) crew, in orbit 350 kilometers above the Earth -- would get little help from ground control. The further away they travel, the greater the delay in communication will be. At its farthest point in orbit around the sun, Mars is some 400 million kilometers away from the Earth. Any SOS call from the spaceship would take 20 minutes to reach mission control and their response would take another 20 minutes on the way back.

Food is another major topic. Each gram of prepackaged food will be closely calculated and stored in the Mars enclosure. If someone wants to drink two cups of coffee in a day, someone else will have to go without. They will also grow their own vegetables in real soil in a greenhouse. Those vegetables, along with freshly baked bread, will be the only non-packaged food onboard.

The pretend cosmonauts will receive €120 per day for spending a year and a half breathing chemically treated spaceship air, drinking reprocessed urine, and eating freeze-dried food. Workers for the IBMP are still hammering and bolting the four windowless modules together, which will be connected by airlocks. But the wood-paneled sleeping cabins are already done, and theyve installed the ventilation system.

The project will simulate the first manned mission to Mars under realistic conditions. The trip to Earths red neighbor takes 250 days. Thirty days will be spent on approach, landing and a brief stay on the sandy rocky surface. Only at this point will participants be allowed to leave their enclosure -- in a complete spacesuit. After that, they will begin the trip home, which will take another 240 days.

The psychological selection process is extremely important, stresses IBMP director Anatoly Grigoryev. He knows what hes talking about: Eight years ago, the Russians attempted a much shorter experiment simulating six months in space.

It wasnt pretty. A Japanese participant dropped out because he couldnt stand the drama. At an alcohol-fueled New Years celebration, a Russian punched his colleague and gave him a bloody nose. The team leader also tried to kiss a female participant from Canada. After that I only went to bed with a knife, she said later.