It was a crisp cold day in February when Dirar Abu Sisi was last seen alive. The Palestinian engineer from Gaza was in Ukraine in preparation for moving there with his family: He, his Ukrainian wife Veronica and their six children wanted to leave the Gaza Strip. While Abu Sisi, 42, dealt with the paperwork, he lived with his in-laws in the eastern town of Kharkiv. On Feb. 18 he boarded a train for Kiev. He wanted to see his brother, who had lived in Amsterdam for years and who flew out just for the reunion. But Abu Sisi never arrived in Kiev.

The exact circumstances of what happened in between are not fully known. Two men in civilian clothing stepped into Abu Sisi's carriage on the night of Feb. 19, according to a train conductor and a porter who were interviewed after Abu Sisi disappeared. At around 1 a.m., they said, the strangers escorted him off the train. However, the train employees later retracted these statements. Since then they've claimed to have seen nothing.

Their sudden forgetfulness could have a simple explanation: In Western intelligence circles it's been claimed that Ukrainian agents kidnapped the Palestinian. A short time later, the Europeans supposedly handed their victim over to the Israelis, who had requested the kidnapping.

One informant says Israel had considered Abu Sisi a high-ranking Hamas man who knows a number of secrets. "If Mossad goes to such an expense, and interrogates the man for six weeks, then he must know something Israel absolutely wants to hear," says the source, who would only speak on the condition of anonymity. If Abu Sisi was just an "irritant," he would have simply been killed.

Jerusalem may believe that Abu Sisi had information relating to Gilad Shalit, the Israeli soldier kidnapped four and a half years ago by Hamas, according to another source. Since Shalit, now 24, was captured, Israel and Hamas have discussed a prisoner exchange, partly with German mediation. Hamas wants 1,000 Palestinians freed from jail in exchange for his freedom. Jerusalem has not wholly given up hope of liberating him with a commando mission. But Israeli forces would have to know exactly where he's held (presumably in the Gaza Strip) -- information they appear to be hoping to obtain from Abu Sisi.

A Wall of Silence

Veronika Abu Sisi knew nothing about any of this in mid-February. She was worried when she heard her husband had failed to reach his brother in Kiev. When he still hadn't turned up a day later, she raised the alarm with officials from the UN and with Israeli human-rights groups. She asked them to find out what had happened.

Her deepest fear was that he'd fallen victim to a political killing. The case of Mahmoud al-Mabhouh, a Hamas weapons dealer, is still a fresh memory among Gazans. A separate story, concerning another man who vanished almost without a trace only to turn up in an Israeli jail, could have rattled her, too: In May of last year it became known that a so-called Mr. X had been held for years in a high-security Israeli prison -- wholly without charge.

But the fear that her husband may have been assassinated proved to be false on Feb. 27. Eight days after he disappeared, Abu Sisi made contact with his wife. In a short phone conversation he told her that he was in a jail in Ashkelon, on the Israeli coast.

Now Veronika thought she understood: Her husband was kidnapped by the Israeli intelligence agency Mossad, she told reporters and human-rights activists, and dragged back to Israel. To find out what exactly happened, Veronika Abu Sisi took a dangerous trip. She left her six children in the care of her mother-in-law in Gaza and crawled through a smuggling tunnel from the Gaza Strip to Egypt. From there she flew to Kiev -- only to run up against a wall of official silence.

A spokeswoman at the Ukrainian Foreign Ministry admitted in early march that Abu Sisi disappeared "under unknown circumstances." But the nation's intelligence service, the SBU, claimed to know nothing. The word, week after week, was that the agency had noticed nothing unusual.

The first ray of light came on March 20, when Israel admitted to having Abu Sisi in its custody. Until then a news embargo had forbidden local media and correspondents in Israel from reporting on Abu Sisi; but a legal case brought by a human-rights organization ensured that it was partially lifted. Some aspects of the case are nevertheless still covered by the embargo. Official charges against Abu Sisi are therefore still unknown.

Heart Problems and a Kidney Infection

Dirar and Veronika met in 1998. She was 19 years old, a violin student at an academy in Kharkiv; he studied next door for his doctorate at an institute of agricultural science. They married the following year, and she converted to Islam. They moved to the Gaza Strip and lived there for 12 years. He worked as a manager at the territory's only power plant; she raised their growing brood of kids. They would have been happy except for the everyday dangers in Gaza -- Israel's blockade, rockets, bombs, the makeshift economy.

When the Gaza war started at the end of 2008, she'd had enough. "On Thursday our sixth baby was born, and on Saturday the war started. We decided to go back to my home," the 32-year-old told the Kiev Post newspaper. She described her husband as "absolutely apolitical."

Veronika recently moved back in with her parents. She sits in a pre-fabricated apartment building in Kharkiv and worries. Last week her husband met two Israeli lawyers she had hired for him. "They say he has problems with his heart. He has a kidney infection and elevated blood pressure," she says. He also, apparently, has lost 13 kilograms (29 pounds).

No one knows how long she or her children will have to wait for him to come home. On Sunday, an Israeli court rejected a motion by his lawyers to release him. 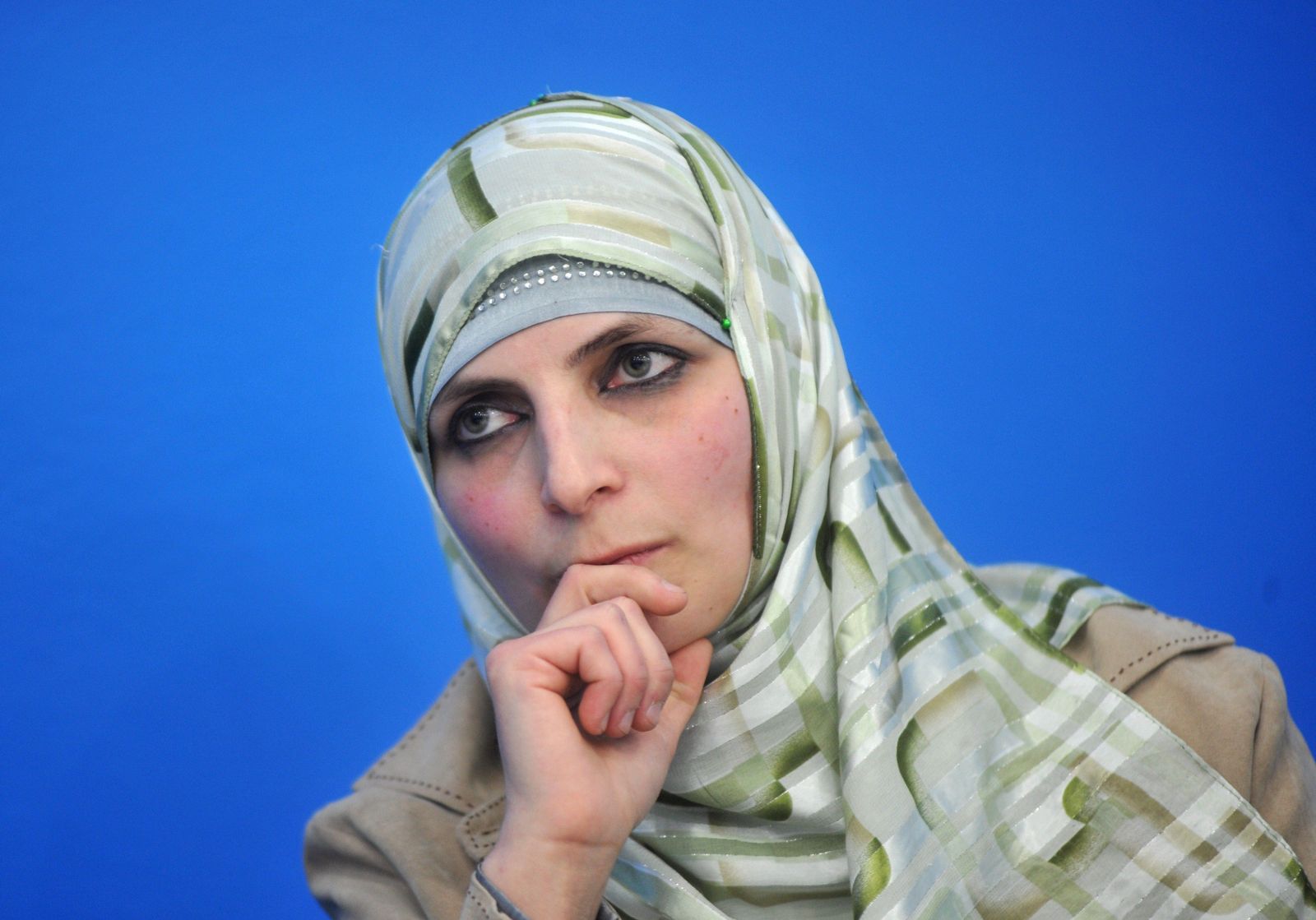