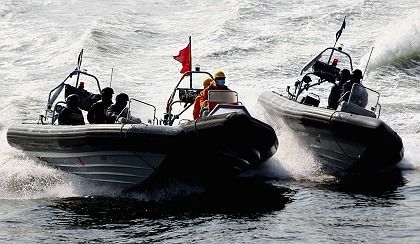 Ready for protestors, whatever language they may speak: The Japanese coast guard carries out exercises in the run-up to the G-8 summit.

Devotees of the made-up international language Esperanto are generally considered to be peaceful people who want to share their linguistic interests with the rest of the world. Among the language's supporters are the billionaire investor George Soros and the US actor William Shatner, who played Captain Kirk in "Star Trek." Even Pope Benedict XVI has embraced the Esperanto community, transmitting his Easter greeting in their language.

But Japanese security authorities are also taking a sudden interest in Esperanto these days. They fear groups of militant Esperanto speakers may converge to stage protests on the northern island of Hokkaido, where the next G-8 summit of leaders of the seven largest economies and Russia is set to take place between July 7-9.

During the G-8 summit at Germany's Baltic seaside resort of Heiligendamm nearly a year ago, which saw extremely violent protests, there was no mention of Esperanto. But if a group calling itself the Esperanto League for Freedom on Hokkaido (Libera Esperanto-Asocio en Hokkajdo) has its way, that all may change in Japan this year. The group is planning to stage protests at the summit, raising just about every global injustice imaginable.

News of the protests has been purcolating on the Internet for weeks now, in part because the German activist Martin Krämer was refused entry to Hokkaido in March by customs officers in the port of Sapporo-Otaru. Krämer, who had been invited by the Sapporo Esperanto League to help prepare for the protests, arrived on a freighter playing "The Internationale" on a trumpet, the London weekly magazine New Statesman reported.

The worldwide community of Esperanto speakers has for years highlighted the issue of globalization, or Tutomondig in their language. They feel indebted to the Polish ophthalmologist and humanist Ludovic Zamenhof, who developed the language and in 1887 published a booklet aimed at literally improving the understanding among different peoples.

Challenging the Dominance of English

Today the universal character of easy-to-learn Esperanto, which allows for only few deviations from its rules, is demonstrated, for example, in the extra tools that the Web browser Firefox offers -- including an Esperanto dictionary. According to Finnish linguist Jouko Lindstedt, around 10 million people across the world can speak the language.

In the run-up to the G-8 summit Japanese anti-globalization activists have been translating news about upcoming events into both English and Esperanto. And Indymedia, the online network for globalization critics, is considering switching from English to Esperanto for international communications, the New Statesman claims in its report.

The Japanese Esperanto demonstrators' main goal is to send out a protest message against the linguistic dominance of the G-8 countries. The Esperanto enthusiasts claim that those countries make up only 14 percent of the world's population, with English speakers making up online 5 percent. So why does English remain the world's predominent language?

However hard they try, though, the feisty Japanese Esperanto protestors are unlikely to be able to make their point to the G-8 leaders meeting. The Windsor Hotel Toyako, where the summit is taking place, is a natural fortress, builtin an extinct volcano. And off the coast of Hokkaido, the Japanese navy will be patrolling the waters in highly mobile units -- just as the German navy did at Heiligendamm.

Of course, Japanese security services are also uncomfortable with the fact that many of the protestors speak a language their agents have never even heard before. Those responsible for providing G-8 security are also viewing a trip in December by Japanses Esperanto speakers to South Korea, where they are believed to schooled militant adherents, with great suspicion.

"As they say in Esperanto: "Alia mondo estas ebla !" (Another world is possible!), Claire Provost writes in the New Statesman, not without double meaning.