Belarusian President Alexander Lukashenko suddenly seems like a different man from the one his country has always known. The authoritarian leader -- who still presides over celebrations every November 7, the anniversary of the Bolsheviks' October Revolution -- is now behaving more like a member of the opposition. In his public appearances, he rants against "official arbitrariness," calls for "economic liberalization" and declares that the former Soviet republic must become "attractive to investors."

This is Minsk's autocrat speaking, the man who likes the country's children to call him "batko" ("father") and whom many consider to be Europe's last dictator. Has he suddenly mutated into a reformer?

Well, you can say for sure that there has been some progress. Belarus now ranks among the top-ten reformer countries on the World Bank's "Doing Business" index in the business-formation category. Likewise, Germany's Committee on Eastern European Economic Relations, a joint organization of leading associations representing German businesses, has noted Belarus' "investment climate improvement" and that there are 360 German companies active in the country.

Until recently, the republic kept itself almost as isolated as it did in its Soviet days. Now it invites investors to Minsk, its capital, for international conferences. The country has considerably increased its income by selling off state-owned enterprises -- such as the domestic cell phone carriers Velcom and Best -- to foreign investors. In 2006, such sales brought $30 million (€21 million) into the country's coffers; a year later, this figure had jumped to $1.2 billion.

The International Monetary Fund has praised Lukashenko's financial policies as well as the fact that he wants to stabilize the country's currency, which has already suffered 20 percent in devaluation. The president "reacted well in the crisis," says Herbert Stepic, CEO of Raiffeisen International, which operates the fifth-largest bank in Belarus.

All of this leaves Europe wondering: What has come over Lukashenko? Is Belarus poised to become the next tiger economy?

For years, Valery Tsepkalo has worked with the Lukashenko on changing the country's course. A former ambassador to the United States, Tsepkalo is director of the Belarusian Hi-Tech Park and an official "aide" to the president.

Sitting on a white leather sofa flanked by an artificial waterfall on the eighth floor of a modern building on the edge of Minsk, Tsepkalo is reinventing his country. As he imagines it, Belarus should become "an information technology leader in the Eastern European and Baltic region." He believes that a "Belarusian Silicon Valley" is emerging.

There are 72 software development companies registered at Minsk's Hi-Tech Park. They enjoy benefits when it comes to the taxes and duties they have to pay, and they can rent office space for a monthly fee of just $3 per square meter (11 square feet). For example, one business that has taken up quarters here is Epam Systems. Founded in the US, the company has 2,000 employees in Belarus, many of whom are hardly older than their mid-twenties; its clients include Bosch and SAP. The average monthly salary in the Hi-Tech Park is about €1,000, or roughly four times that of the country as a whole.

Still, probably even Lukashenko himself doesn't believe the entire country can really transform itself into a high-tech paradise. In fact, Europe's last bastion of socialism is in danger of running out of steam. Even if the IMF is predicting that Belarus will enjoy economic growth once again in 2010, Lukashenko still needs money. And he's welcoming help from wherever he can get it. He received $2 billion in loan commitments from the Kremlin, and the IMF paid out almost $700 million in late October as part of a $3.63 billion loan.

More than anything, Lukashenko is looking for Western investors. He plans to sell 52 percent of the shares in the long-established Luch watch factory in Minsk to Swiss watchmaker Franck Muller, whom the president praises as an investor that embodies "humane" privatization.

Lukashenko clearly doesn't have the same confidence in the Russian oligarchs who are also interested in investing. He rebuffed the Russian state-run Sberbank the first time around when it wanted to take over Promstroibank, a large Minsk-based financial institution. Lukashenko complained that the Russians were only offering half as much as he was hoping to get. Then Russia ratcheted up the pressure, and Lukashenko eventually agreed to the $280 million deal -- in order to continue receiving natural gas at a discount until 2014.

Still, Lukashenko made his deep mistrust for Moscow known within a select circle of sympathetic Russian listeners. With Russian investors, the autocrat asks, who can guarantee they won't buy something and then drive it into bankruptcy? That's exactly what happened when shady investors from Moscow acquired the Wadan shipyards in Rostock, on Germany's Baltic Sea coast.

In reality, the president's goal isn't reform; instead, it's control over the country's most important companies. Lukashenko recently made snide remarks about "all this privitization mess" to people close to him, and he reiterated his support for "state regulation of the economy," including "state intervention in setting price policies."

The government originally announced that it would sell 519 state-owned enterprises. But now, experts such as Ricardo Giucci and Robert Kirchner from the German Economic Team in Belarus, a consulting group financed by the German government, describe a "standstill in the privatization process" that is "questionable in terms of economic policy."

Moreover, Lukashenko is currently submitting offers for five pilot companies that are to be privatized in accordance with an IMF requirement, but all have turned out to be rather unattractive. The president's offerings include a bottling facility for sparkling wine, an obsolete ball bearing factory and a Soviet-era hotel in the provincial city of Brest. Unsurprisingly, private investors remain the exception to the rule, and the government controls around three-quarters of Belarus' economy.

Still, one successful privatization has taken the form of the joint venture between Minsk's truck manufacturer and the German automotive company MAN. Around 300 workers assemble 45 heavy trucks and excavators per month in the company's orderly factory rooms. Deputy director Stanislav Ivanyushenko regularly sends employees to Germany for additional training.

'On the Brink of Standstill'

But, just a few kilometers away, in the "Minsk Tractor Works V. I. Lenin," socialism never seems to have died out. The factory, whose sales have reportedly fallen by more than a third, is cutting costs even when it comes to heating the workrooms. In an assembly hall that is nearly one kilometer (0.6 miles) long, workers on the production line attach engine blocks to red-painted tractor chassis at temperatures just a few degrees above freezing. Although the tractors are meant for export, at first, they generally end up spending a long time in stockpiles.

Deputy director Igor Yemelyanovich still acts the part of the successful manager. "We're doing great business and don't need to privatize," he maintains. Still, the state-owned company, with its 36,000 employees, is not slated for sale.

Likewise, government investigators have cast a pall over the company's possibly cooked books. The State Control Committee has initiated two criminal proceedings against managers at the tractor factory for abuse of authority and currency profiteering. The investigators found evidence of bogus transactions as well as sales to Russia at predatory low prices. Even the governmental newspaper Soviet Belarus has admitted that the company is operating "on the brink of standstill."

Such reports may force Lukashenko to open his country to the West considerably sooner than he had planned to. That's precisely what the European Union is hoping for and, in anticipation, it has even lifted a ban prohibiting members of the Belarusian government from entering EU countries, which was imposed in 2006 as a result of suspected electoral fraud.

In early December, Italian Prime Minister Silvio Berlusconi gave the country's status a boost when he visited Minsk. The trip marked the first time that the head of an EU country had visited Lukashenko in 15 years. Right away, Berlusconi shamelessly overdid things a bit in his pleasant remarks, gushing: "I thank you and your people, who love you, as can also be seen from the elections." 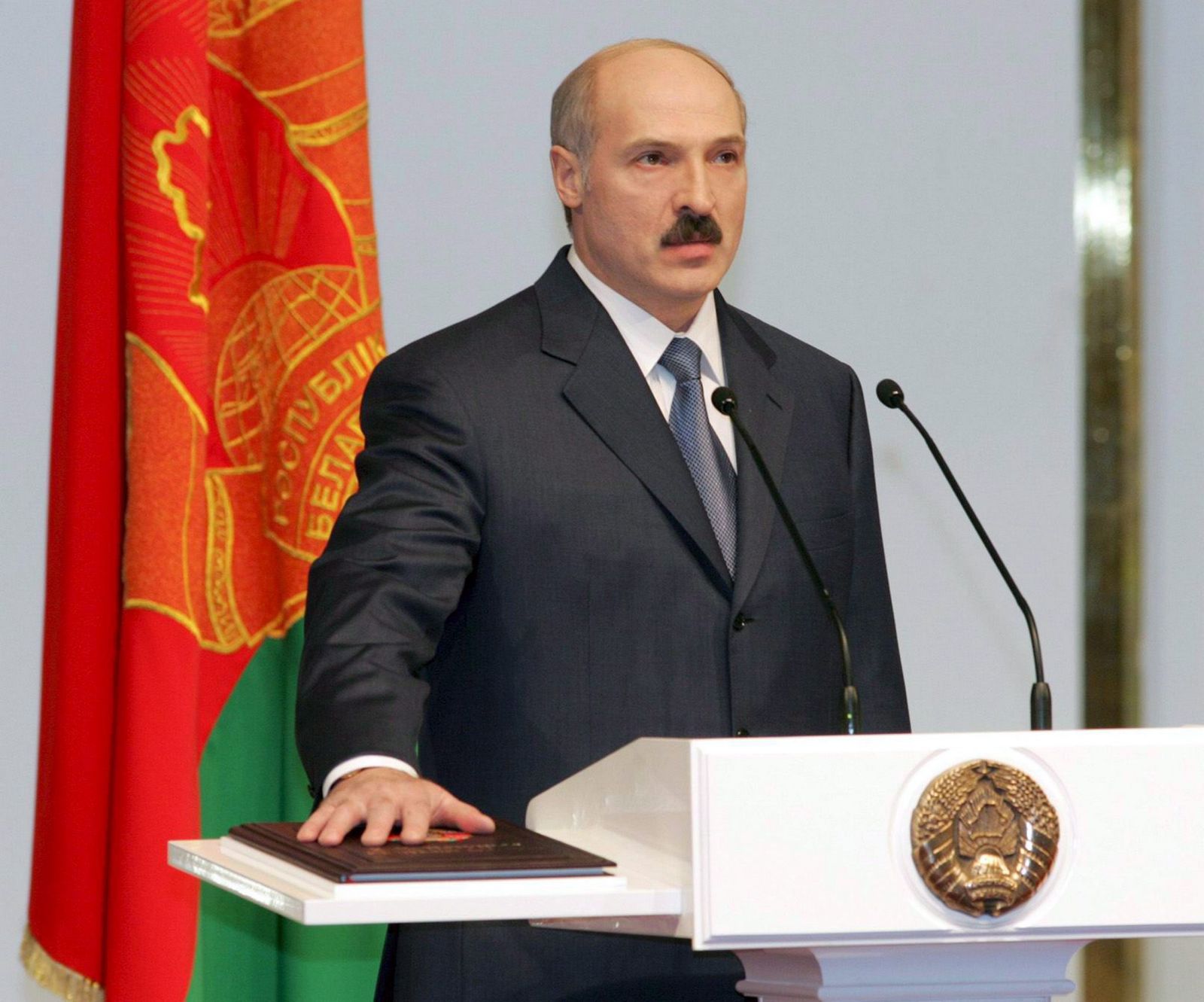 Can President Alexandre Lukashenko transform Belarus into a high-tech economy?