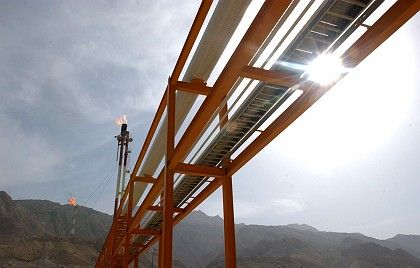 Iran's huge gas reserves, Europe's energy needs and the US's hard line on Iran's nuclear program all add up to an explosive mixture.

Iran is planning to leverage its massive gas reserves to increase its influence in Western Europe -- by fair means or foul. If selling gas to Europe doesn't work, then Iran's Revolutionary Guards may resort to violence in the worst-case scenario.

According to intelligence sources in the Middle East, Iranian leaders are considering making an unusual offer to supply Europe with large quantities of natural gas. The gas would be supplied via the planned Nabucco pipeline, which will run from Azerbaijan to Austria via Turkey.

The offer would be attractive to European leaders as it would allow Europe to reduce its dependence on Russian natural gas. Germany currently gets about a third of its natural gas requirements from Russia, and demand is expected to increase in the coming years. There are major concerns in Europe about the continent relying too heavily on Russia for its natural gas, particularly after a series of recent disputes in which Russia cut off energy supplies to Ukraine and Belarus.

According to minutes of a meeting obtained by SPIEGEL, a representative of Iran's Revolutionary Guard presented the proposal to Iran's National Security Council. The order to prepare the plan apparently came directly from Iran's supreme leader, Ayatollah Ali Khamenei, according to the intelligence sources.

Construction work on the Nabucco pipeline is expected to begin in 2009 and to be finished by 2011. The pipeline, which is being built by a consortium headed by the Austrian company OMV, will have a total length of 3,300 kilometers and cost around €5 billion. However the pipeline is controversial within the European Union and Moscow has already made its opposition to the project clear.

The planned Nabucco pipeline could be used to pipe Iranian natural gas to Europe.

Tehran has yet to make an official offer, however. And any overture could cause political friction between the US and Europe: The US government has demanded that Berlin and Paris take clear diplomatic and economic action against Tehran over its suspected nuclear weapons program. German Chancellor Angela Merkel recently assured US President George W. Bush that Germany would apply strong economic pressure on Tehran. Increased sanctions could make Iran's economy vulnerable.

However if a carrot doesn't work, then Iran might resort to a stick. Other alternatives were apparently also discussed at the meeting in Tehran. Iran's elite Quds force, a branch of the Revolutionary Guards, are reported to be charged with looking into possible ways to disrupt Berlin's energy partnership with Russia -- for example through terrorist actions against the planned Baltic Sea pipeline between Russia and Germany.