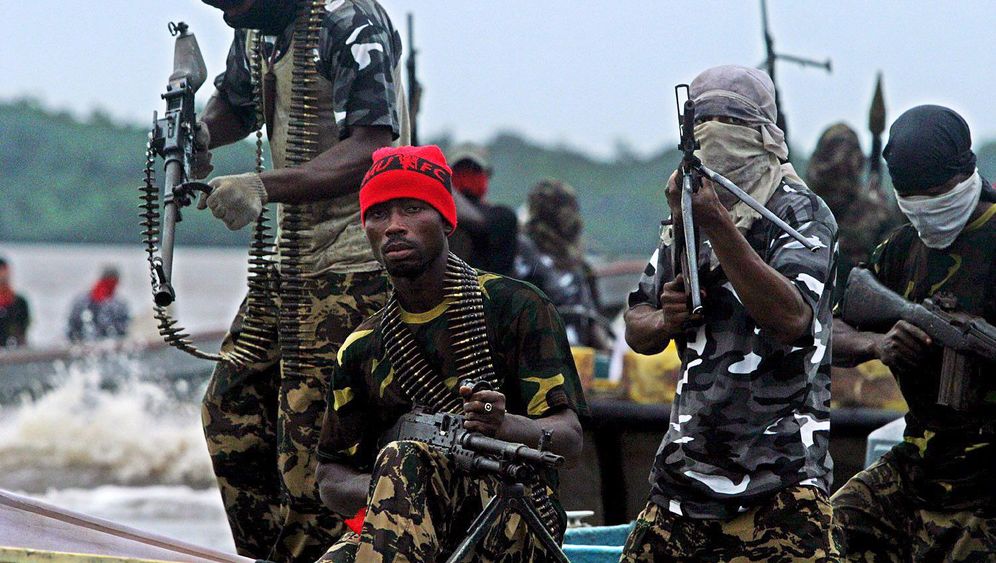 Photo Gallery: The Dangers of the Niger Delta

Bombs used against civilians; millions paid to corrupt officials; and a kidnapping industry that employs students during university vacations: The US diplomatic cables from the Nigerian cities of Abuja and Lagos paint an unusually bleak picture of the situation in the oil-rich Niger Delta. Hardly any of the international oil companies active in the delta publishes production figures, kidnappings and hostage-taking are a daily occurence and the civilian population is suffering -- not least because they too are occasionally targets of the Nigerian Army's special forces.

The central government in Abuja has neglected the delta for decades. It has failed to build schools, hospitals and roads and has simply ignored the serious environmental problems. All that mattered was that the oil kept flowing -- and continued to produce kickbacks for the political elite. "The Federal Government has not funded one road in the key Niger Delta States in the last 10 years," reads one February 2009 cable from the US Consulate in Lagos, citing a high-ranking politician.

In the face of such neglect, organized crime has become rampant in the delta. There are kidnappers who are in bed with the authorities and special military units that, while they sometimes fight rebels in the delta, frequently have a stake in the oil business. The rebels, although they stage attacks on the multinational oil companies, also sell oil and enjoy police protection. The political elite thrives on the chaotic situation.

"Students used to go to the camps for three months during their vacations so that they could earn money," reads one analysis from the US Consulate in Lagos, refering to criminal camps. The students attacked oil platforms, traded in oil and kidnapped and guarded hostages. "They would earn … $1,071 for a three-month period. Now, however, with the Joint Task Force (an army unit) pressing them, the job is no longer glamorous but dangerous."

Companies that drill for oil in Nigeria needs to have strong nerves. It is hard to obtain reliable information, and rumors circulate wildly. Do the rebels, who are targeting the multinationals' production efforts, really have anti-aircraft missiles to shoot down companies' helicopters, as one message describes? Is the Russian energy giant Gazprom planning to get into the natural gas business in the country? And which investors might be participating in a gas pipeline across the Sahara to Algeria?

The 4,000 kilometer pipeline to the Mediterranean coast would likely cost at least €10 billion. According to one cable, the multinationals Total and Gazprom are interested in the project. The head of ExxonMobil in Nigeria, however, dismissed the pipeline project as "fantasy" that would never become reality because the pipeline is too expensive and politically too risky. Above all, however, it would not benefit Nigeria.

More Efficient to Import from Europe

Complaints coming from Western oil companies are bitter. At a meeting with the US Africa envoy, Johnnie Carson, in Lagos last February, oil executives criticized the "amateur technocrats" who are in charge of the oil and gas business on the Nigerian side. The managers said that Nigerian politicians believe that deep-sea drilling would earn them no money. Partners from banks and the business world did not understand the business, they said. The government in Abuja, they added, had collected $2.5 billion dollars in revenue over the previous two years, but had not made any investments in return.

At another meeting, an ExxonMobil manager reported that companies had to calculate for a loss of around 40 percent for oil transport via overland pipelines in the country -- a result of oil thieves. It was more efficient to import refined oil from Europe than to process it in Nigeria itself, he said. The police charged with protecting the pipelines seemed primarily concerned with coordinating the pilfering and letting potential thieves know where they could steal the oil.

One dispatch from Washington reads: "Nigeria's four state-owned refineries have an installed capacity of 445,000 barrels per day. They have a history of fire, sabotage, poor management, lack of turn-around maintenance, and corruption. These elements have limited refinery output to 40 percent of capacity or less."

In January 2009, one oil executive complained that the already bad situation had gotten worse. Widespread attacks by pirates had led to tanker shipping companies only accepting contracts under certain conditions, she said. Nigerian government officials apparently responded by telling her: "Hire more security."

Another oil company protested that high-ranking Nigerians demanded millions in bribes for rights to load tankers. In addition, a top Nigerian prosecutor told a visitor that "he would sign a document only if the visitor paid $2 million immediately and another $18 million the next day."

Given the corruption, multinationals in Nigeria find themselves involved in deals that are likely unique in the oil industry. A report dated March 2009 states that "Shell and Total recently revealed they were forced to loan their Nigerian partners billions of dollars at well below market rates to support ongoing joint venture operations."

US diplomats also referred to a complaint from one oil multinational about the Nigerian Navy, which, the complaint said, was totally incapable of protecting oil companies in the delta. When rebels attacked an oil platform in the Gulf of Guinea with a total of six speed boats, Shell employees sounded the alarm at 2:30 a.m. It was only at 7:30 p.m., after the attackers had long disappeared, that naval boats arrived -- and their primary aim was to obtain supplies of fuel and food from the platform.

Here and there, however, improvements have been reported. Israeli security experts in the Nigerian state of Bayelsa were now going to keep the kidnapper gangs at bay, one dispatch reads. In fact, US diplomats write, the Israelis are remarkably active in the Niger Delta. The Israeli military provides equipment and training to the Nigerian special unit that fight rebels in the delta. Back in October 2007, the unit lacked functioning helicopters and armored troop carriers, and only had two gunboats. It now has more than 100 vehicles, around two dozen boats and two helicopters at its disposal.

There is apparently one small problem, however. Some members of the unit are deeply involved in dubious oil deals.

7 Bilder Photo Gallery: The Dangers of the Niger Delta 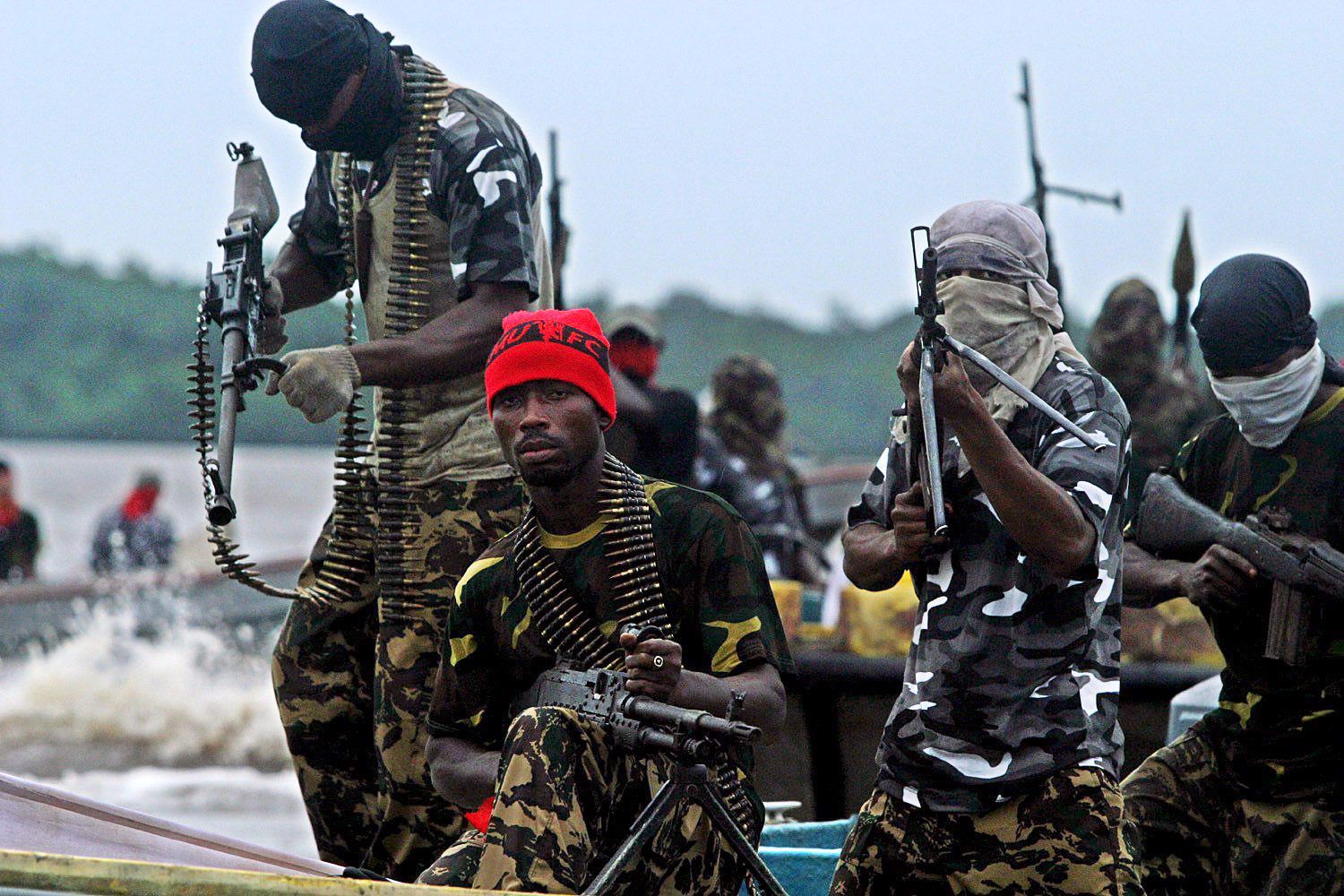 Armed rebels in the Niger Delta in 2008. Rebels have taken over power in many areas of the country and often have little to fear from security forces. Multinational oil companies face a dismal security situation in the region. In addition to rebels, they must also fight off pirates, kidnappers and corrupt Nigerian politicians, according to US diplomatic dispatches.