The region known as the Fertile Crescent forms a 3,000- kilometer (1,900-mile), sickle-shaped corridor at the northern end of the Arabian Peninsula. Embedded in desert and barren mountains, it extends in a giant arc from the Nile valley in Egypt to the east coast of the Mediterranean and up to the Persian Gulf. It runs right through Israel, Lebanon and western Syria, touches southern Anatolia, then Iran and finally descends into the area between the Euphrates and Tigris, in modern-day Iraq.

It is a landscape of truly epic importance. It is the cradle of agriculture and livestock farming, where 10,000 years ago the Neolithic Revolution began -- the transformation from Stone Age nomads to settled populations, combined with the rise of the first towns and civilizations. There, the Sumerians scratched wedge-shaped symbols into clay tablets and created the world's first script.

But the area known as the cradle of civilization is now under serious threat. Before the end of this century, the Middle East's legendary bread basket could dry up as a result of global warming, to the extent that it is no longer suitable for traditional rain-fed agriculture -- destroying its existence as an agrarian landscape.

"Ancient rain-fed agriculture enabled the civilizations to thrive in the Fertile Crescent region," Pinhas Alpert, a professor of atmospheric sciences at Tel Aviv University, told SPIEGEL ONLINE. "But this blessing is soon to disappear due to human-induced climate change."

Together with colleagues from Japan, the Israeli physicist simulated how rainfall patterns and the water flows of major rivers in the region will change over the 21st century. To do that, they made use of a climate change model developed by the Meteorological Research Institute in Tsukuba, Japan. The model is unique in that it allows researchers to simulate the climate with a spatial resolution of 20 kilometers, a scale previously unobtained by other global climate models. 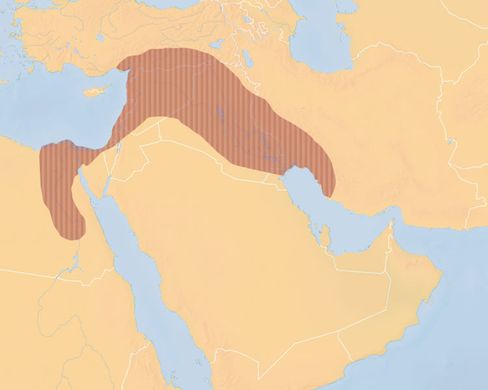 Climate change could turn the Fertile Crescent into a barren landscape.

Alpert presented the results of his research at the annual conference of the European Geosciences Union in Vienna this week. Even with moderate temperature rises, he stated, the yearly rainfall rate on the Mediterranean coast -- in Syria, Israel and Lebanon -- will fall by 50 to 200 millimeters (2 to 7.9 inches). The Euphrates would carry 30 percent less water than today; in the Ceyhan River in south Turkey the water flow would shrink by 40 percent and in the Jordan River by as much as 80 percent.

But, if you take the extreme scenario, water resources will become even scarcer. According to those predictions, the region between the Euphrates and Tigris will lose two-thirds of its current levels of rainfall. The water flow of the Euphrates and Ceyhan will fall by over 70 percent and 80 percent, respectively. The river Jordan will practically dry up -- it will carry only a measly 2 percent of its original volume.

The Fertile Crescent and the grain cultivation which takes place there need a lot of precipitation in the winter, as only then does the water level in rivers rise sufficiently to last through the dry season, which runs from spring to fall. "The main season for rainfall is the winter," Alpert explains. "If you take October to March, you get over 90 percent of the rainfall."

During that time, humid air from the Atlantic comes in from the west via the Mediterranean. Abundant amounts of snow fall over the Taurus Mountains in Turkey and the Zagros Mountains in Iran and Iraq, which rise to well over 4,000 meters, as well as over the Golan Heights. In spring the snow melts, raising the water levels of rivers. These rivers, whose waters are diverted on to fields for irrigation, are the lifelines of the Fertile Crescent.

But because of climate change, the cradle of agriculture is drying up. Even with only a moderate rise in temperatures, the Fertile Crescent will shrivel and the land fit for cultivation in the Middle East will shrink, says Alpert. "And the indications are very, very problematic to the region," he adds. "We all know that this region is very fragile ... Most of the governments in this region are very fragile and (have) very weak economies."

Rich countries, such as Canada and Russia, will benefit from climate change as parts of their northern areas will become usable as farmland, Alpert says. However, in poor subtropical countries, where it will get even drier, farmland will be lost, as will probably soon happen in the Middle East.

The Israeli climate scientist has great faith in the results of the new models. He admits that it is the first Middle Eastern study to use the Japanese climate change model. However previous models failed to produce accurate simulations of the region because their spatial resolution was not high enough. "It is the first global simulation with a supercomputer which was able to really reproduce the shape on the Fertile Crescent very, very well," he says.

Today, there are already signs of a trend towards greater dryness, for example in the Jordan River's watershed. There, German researchers are also creating simulations of the effects of climate change on the water supply as part of an international research project called Glowa Jordan. "There is no longer so much snow on the Golan Heights," says Peter Suppan of the Institute for Meteorology and Climate Research in Garmisch-Partenkirchen, Germany. "And when it melts, the water runs off far quicker."

As a result, water does not flow out of the mountains in the later part of the year, the water level of the Jordan River falls dramatically and it becomes difficult to irrigate fields. According to Suppan, "the people there don't care if it gets one or two degrees warmer." Much more important, he says, is what happens to rainfall levels: "Even a drop of 10 percent could have drastic consequences."

However, Alpert believes the Fertile Crescent can still be saved. "It depends very much on how the world will react, whether the world will really take serious action as is needed (against climate change)," he says.

The new research makes one thing crystal clear. Climate change is not only threatening to wipe out ice sheets, glaciers and animal species -- it could also destroy humanity's irreplaceable man-made landscapes.