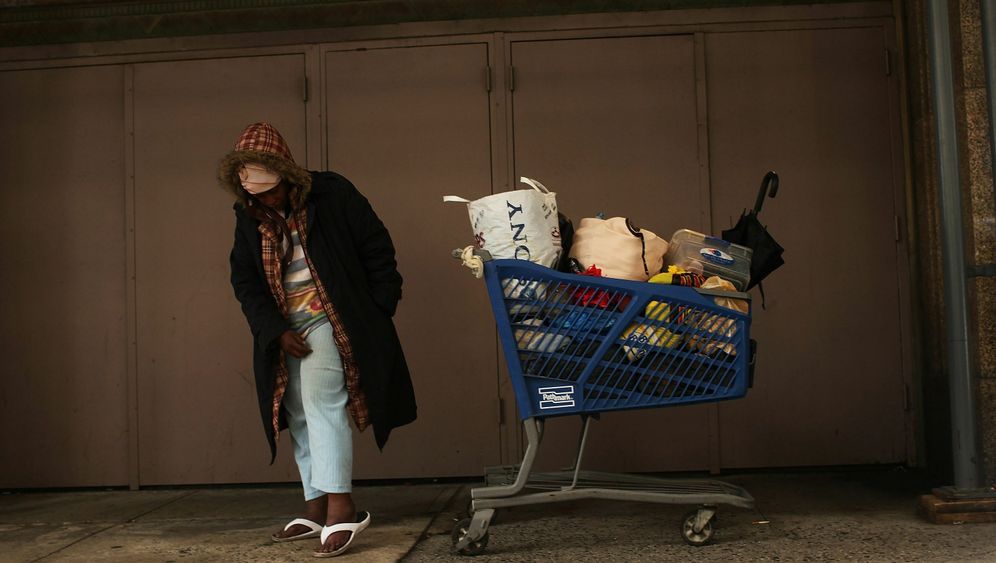 Photo Gallery: 'Too Many People, Not Enough Jobs'

The crisis caught her unprepared. "It was horrible," Pam Brown remembers. "Overnight I found myself on the wrong side of the fence. It never occurred to me that something like this could happen to me. I got very depressed."

Brown sits in a cheap diner on West 14th Street in Manhattan, stirring her $1.35 coffee. That's all she orders -- it's too late for breakfast and too early for lunch.

She also needs to save money. Until early 2009, Brown worked as an executive assistant on Wall Street, earning more than $80,000 a year, living in a six-bedroom house with her three sons. Today, she's long-term unemployed and has to make do with a tiny one-bedroom in the Bronx. It's only luck that she's not homeless outright.

"One thing came after another -- boom, boom, boom," Brown recalls. "I kept getting up and dusting myself off, but I could never get ahead again. I spiraled further and further into the abyss." Her voice is trembling now. "I've done everything America told me to do. I went to school. I've never been to jail. I've kept my nose clean. My kids are great kids."

She laughs a sarcastic laugh. "And now?"

Wall Street Up, Incomes Down

Pam Brown is one of millions of Americans who, during the recession, tumbled from their idyllic middle-class existence to near-poverty -- or beyond. For many, like Brown, the downfall is a Kafkaesque odyssey, a humiliation hard to comprehend. Help is not in sight: their government and their society have abandoned them.

Wall Street is preoccupied with chasing new profits again. Yet for large sections of the nation, that old myth of working your way up, of bootstrap success and its ultimate prize, homeownership, has evaporated. The middle class, the America's backbone, is crumbling. The American Dream has turned into a nightmare.

Last year the US poverty rate reached 14.3 percent, 1.1 percent higher than in 2008. Almost five million Americans skidded below the poverty line ($22,050 annual income for a family of four), many from hitherto sheltered circles, where poverty was a foreign word. The number of long-term unemployed keeps rising. Worst off are families with children. Every fifth child in the US lives in poverty today.

"The situation was bad before, don't get me wrong," Bich Ha Pham, research director with the Federation of Protestant Welfare Agencies (FPWA), a welfare organization in New York City, told SPIEGEL ONLINE. "But this time, it could happen to anybody."

And nobody seems to care. Poverty wasn't an issue during the midterm elections -- and it won't be an issue now that the spendthrift deficit hawks of the Republican Party have reclaimed the House of Representatives.

"Nothing's going to happen," Curtis Skinner, head of Family Economic Security at the National Center for Children in Poverty (NCCP), told SPIEGEL ONLINE. The political swing to the right, Skinner fears, is "extremely hurtful" and "absolutely disastrous" to the interest of the weakest. Indeed, what Washington is debating now is not more help for the poor -- but extending the former President George W. Bush's tax cuts for the rich.

It wasn't long ago that Pam Brown, too, rarely worried about those who fell through the social safety net -- or even feared that fate for herself. "I wish I had been more engaged," she says now. "Wall Street gives you such a comfort with its bonuses. In didn't understand the stringency of your life not being your own anymore, of losing control like that."

How this could have happened is a cautionary tale about the dark side of the affluent society. That's where Brown lived happily for a long time -- until the floor fell out from under her feet.

It fell out despite her exemplary resume. Raised in modest circumstances, the African-American woman managed to get ahead on her own. She attended high school in the Bronx and college in Brooklyn, after which she started as an intern at Citigroup. Soon she joined her boss, a wealth manager, on the trading floor of the New York Stock Exchange, then moving on with him to Morgan Stanley, then HSBC, then Barclays.

As executive assistant, Brown had a front row seat "watching capitalism work." She had her "pulse on what was going on" in Wall Street finance, leaving her convinced that "everything is possible." Not least for herself: She was about to buy the house where she rented from her landlady.

But just as they were moving to Bank of America, her boss died of a heart attack -- at the height of the financial crisis. The bank took on Brown as a temp, then sold her division to French BNP Paribas and downsized her job. At the same time, her marriage fell apart.

It was a devious trap. Since Brown only had worked as a temp for Bank of America, she couldn't claim unemployment insurance. It was a straight line to the ranks of the poor, hungry and welfare rolls.

"It was very difficult to identify myself as poor," she says. She recognized her own "little individual prejudices" against people on welfare, the shame and stigma that came with it. "I learned compassion -- the hard way."

This hard way turned into an odyssey. Instead of finding a job soon, Brown got entangled in the maze of the US welfare system.

Bill Clinton's "Welfare Reform" of 1996 privatized welfare in the US, turning it into a for-profit business. Nowadays, welfare seekers have to adhere to such strict criteria that "a large number of applicants will have their applications denied, mainly because of purported non-compliance with certain requirements," the FPWA recently found in a study. Many others would just give up.

Brown wasn't spared either. First the agencies couldn't determine how much help she was due. Then, because of a still-unresolved computer error, her cash allowance was denied completely.

She now gets just $242 in food stamps and $400 in rent subsidy per month. Every payment requires a new "application," for which she has to produce dozens of documents.

The food stamps last about two weeks. Beyond that, Brown has to rely on soup kitchens or private welfare organizations, like the West Side Campaign Against Hunger (WSCAH), which runs a food pantry and provides counselors and cooking programs in a church basement on West 86th Street in Manhattan.

"There's been an enormously dramatic increase in clients," says WSCAH Executive Director Doreen Wohl. "This is the worst it has been in our 31-year history. We're in a crisis." The white-haired lady is standing in the little "supermarket" where the needy can choose food by a point system -- grains, proteins, vegetables, fruit, milk. The demand is so high their meat freezer looks plundered.

For Pam Brown, last winter was the worst. One day she ran out of food completely and had to go through trash cans. She fell into a deep depression. Her son Malik finally got her out of it by dressing up as Santa Claus.

The toughest part is watching her kids suffer. "Parents should fulfill their children's dreams," she says. "Instead, my sons are pulling me through."

Economists claim things are looking up. Brown doesn't feel much of that. To this day she spends up to eight hours a day, several days a week, in the waiting room of a "Job Center," her neatly printed resume in her bag, only to be sent to dead-end training programs and interviews leading to nothing. "There are no jobs," she realized. "Too many people, not enough jobs."

In the meantime, she feels treated like cattle. "They don't know what to do with educated people like me," she days of her overwhelmed social workers. "They're looking for the angry black or Latino woman."

She did have two jobs, temporarily. A real estate firm employed her for a week to help out with a project. "I was able to buy soap, toilet paper, dish dertergent, and I wasn't washing my clothes on a washboard anymore," she remembers.

And last winter, she "swept and shoveled" the streets for the New York City Sanitation Department -- in a dark, remote corner of the Bronx, underneath the expressway, with parked rigs and "condoms all over the place ... I was scared for my life."

She would be homeless if it weren't for her lenient landlady. But the house is up for sale, and she isn't sure how the next owner will handle it. Brown is terrified of homeless shelters. Just the other day she went to visit a girlfriend in a shelter: "It was like jail, with steel bars and a curfew." Her friend had lost her home in spite of her MBA.

The waiter refills her coffee. Brown takes a sip and apologizes for her grievances. "No matter what," she says. "I will not allow this to take away my optimism in the human spirit." Then she's off, to another interview. Who knows.

8 Bilder Photo Gallery: 'Too Many People, Not Enough Jobs' 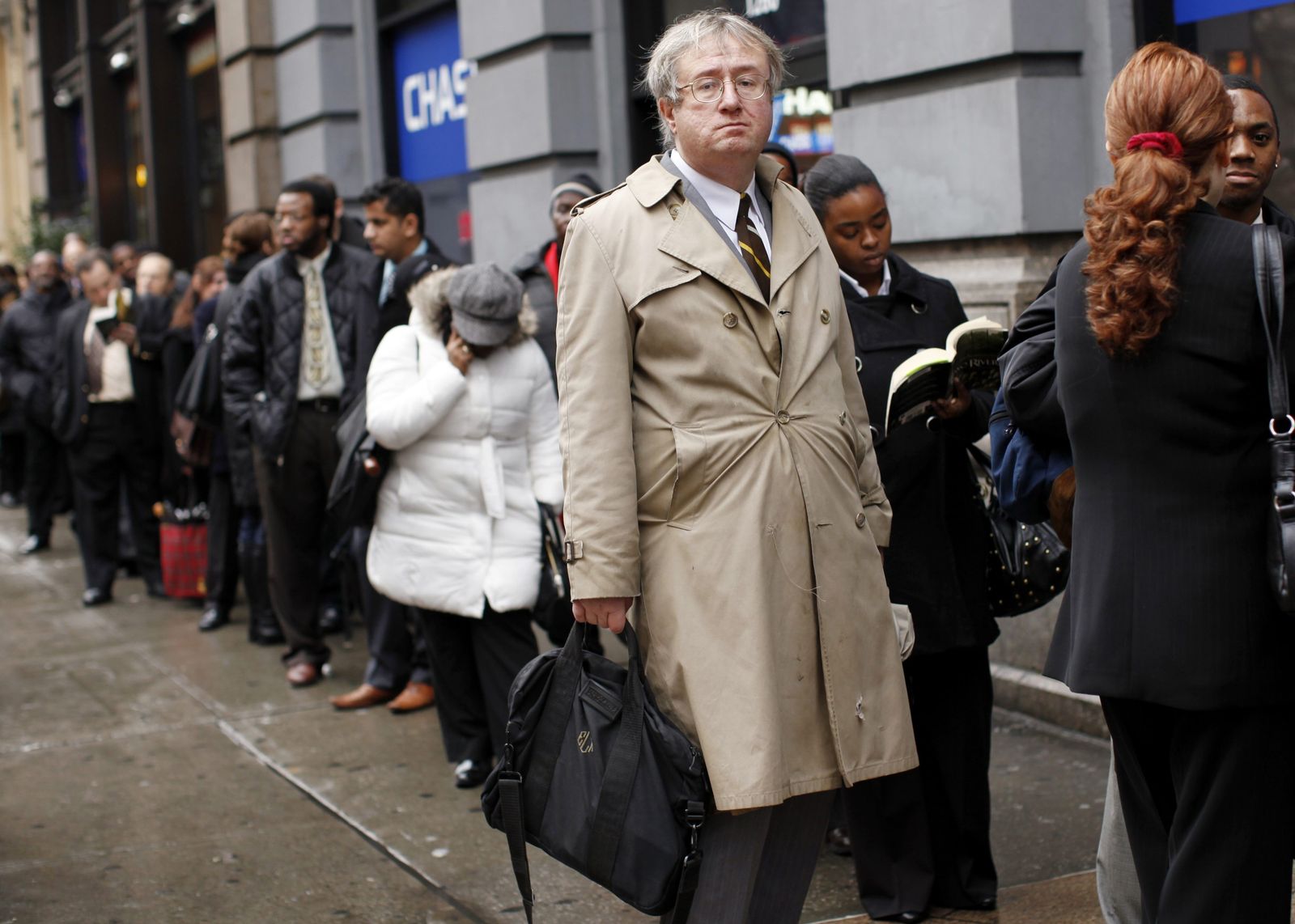 A job fair in New York City. "There are no jobs," says Pam Brown, the former Wall Street personal assistant (not pictured). "Too many people, not enough jobs."